JBL have a reputation for clinically precise monitors, but this time they've come up with something a little smoother... 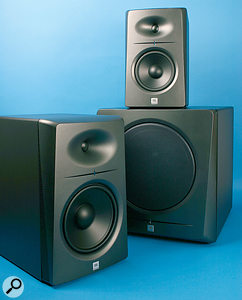 JBL are one of the longest established names in speaker design, and whenever they come up with a new range I always take a keen interest. Their new LSR 2300 series is very affordable, so I've been itching to put it through its paces.

These two‑way active studio monitors come in five‑inch and eight‑inch versions (the LSR 2325P and LSR 2328P respectively), and may be used with or without the matching 2310, a 10‑inch subwoofer. The general features of the two speakers are similar, other than the expected differences in size and audio specifications (see the 'At A Glance' box). The LSR moniker stands for Linear Spatial Reference, something that is said to deliver greater accuracy at the mix position in a variety of room types. What this translates to in simple terms is an emphasis on more consistent off‑axis sound, ostensibly resulting in a wider sweet spot, and less in the way of coloured wall and ceiling reflections. Apparently, the methodology behind the LSR approach is to take 72 different measurements at various angles right around the speaker, and then to use this data to help engineer the final design.

The low‑frequency transducers are magnetically shielded and both the five‑ and eight‑inch drivers have a 1.5‑inch diameter voice‑coil, while that on the optional sub is slightly larger, at two inches. A problem facing all speaker designers is how to get rid of the heat that builds up in the voice coil, so as to reduce the effects of power compression and the consequent tonal changes at high operating levels. JBL have always paid attention in this area, combining good thermal management with high efficiency, often utilising the cabinet port as part of the cooling system.

Class A/B monolithic power amplifiers are used to drive both the woofer and tweeter, the latter being a damped soft‑dome device (again, magnetically shielded). Most of the JBL speakers I've used up until now have featured titanium‑dome tweeters, so I was eager to hear how these new designs differed. The tweeter feeds JBL's EOS (Elliptical Oblate Spheroidal) waveguide, shaped to give a dispersion pattern width of ±30 degrees horizontally and ±15 degrees vertically. There's also an elliptical aperture around the tweeter, rather than the more usual circle — which is apparently designed to optimise HF coverage at frequencies above 9kHz.

Audio input is via balanced XLR or quarter‑inch jack and unbalanced RCA phonos, and mains is supplied using the usual IEC power connector, next to which a voltage selector allows 120 or 230V AC operation. HF and LF adjustments are available to the user via horizontal slide‑switches ( LF: ‑3dB, 0dB, +2dB. HF: ‑2.5dB, 0dB, +2.5dB) to compensate for placement and room characteristics, and there's a rotary volume control for setting the input gain. There's no quarter-/half-/full-space switch, so the optimum LF EQ position has to be determined by ear (or measurement). There are standard mounting points for those wishing to wall‑mount the speakers, and a thin foam isolation pad is built into the cabinet base for secure desktop or stand mounting.

Constructionally, the cabinets appear to be made from MDF, with a black plastic-foil finish, and augmented by a moulded plastic front-baffle skin to provide the HF waveguide and the smooth‑edged woofer aperture. Radiused corners improve the look of the boxes and help reduce diffraction. The power light (which is, in accordance with current fashion, blue!) sits between the woofer and tweeter, while the rear reflex-port features a plastic moulded slot, with rounded edges and a series of fins on its lower edge. However, I doubt these fins help much with the cooling, as plastic is a poor conductor of heat. The metal rear panel is flush with the cabinet sides and holds all the audio connections, as well as the mains inlet, power switch and voltage selector.

Clearly, the design has been kept simple to keep costs down, but there are no obvious compromises, other than how the front-baffle plastic shell is made and attached, as it sounds somewhat hollow when tapped in certain places, especially just below the tweeter waveguide. This doesn't affect the sound in any obvious way when in use, but I'd have been happier if it had been better damped.

The 2310SP active studio subwoofer provides additional low‑end extension down to 28Hz, and is styled to match the main monitors. It offers stereo XLR, balanced quarter-inch jack and RCA phono input connectors, plus two sets of balanced outputs (XLRs only) to feed the main monitors. As the sub is designed to be used with either of the LSR monitors, the crossover setting is selectable at 80 or 120Hz, and there's also a detented level control for balancing the sub with the main monitors. The 10-inch driver, which is protected by a steel grille, is magnetically shielded and powered by a 180W amplifier, giving a maximum peak SPL of 113dB or 104dB continuous.

There's also provision to connect an external bass-management crossover system if required, courtesy of a third position on the crossover frequency switch. When 'External' is selected, the XLR left and right outputs are disabled, as the feed to the monitors would then be taken from the external crossover. A phase switch allows the sub signal to be inverted, and for some sub positions this gives a better result than having it in phase.

The cube‑shaped, rear-ported cabinet is made from three-quarter-inch MDF and, in common with the five- and eight-inch monitors, it has rounded corners and standard M6 mounting points that fit the popular Omnimount geometry. While fairly compact, at 16.3 x 15 x 18.1 inches, the sub weighs a substantial 45.5 pounds and sits on small feet to prevent unwanted acoustic coupling with the floor. All the input connectors, power connector and user‑adjustable controls are located on the rear panel. 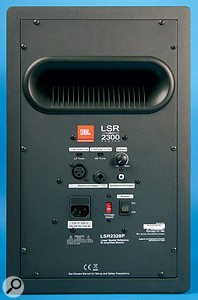 The rear panel of the LSR eight‑inch speaker, the 2328P, which includes a switchable voltage selector for the power inlet, as well as high and low trim filters. Also featured are balanced and unbalanced analogue audio inputs and a master volume knob.

As a stand‑alone nearfield for use in small rooms, the compact 2325P model delivers a full and well‑balanced sound with a pleasantly smooth top end. The lows, though not incredibly deep, sound bigger than you might expect from a small speaker, although they also tend to sound a touch hyped by the port tuning; well‑damped bass parts or kicks produce a somewhat 'plummy' sound. Overall, though, the tonal balance is good, and the same is true of the stereo imaging. While some transient clarity may have been sacrificed to keep the high end smooth, the 2325P is still a very practical little monitor for use in smaller rooms or programming suites, where its tonality makes it comfortable to use for long periods. In larger spaces, where more bass extension is needed, it can, of course, be teamed with the 2310SP to provide a true full‑range system.

In comparison, the 2328P has a deeper and more credible low end, although the overall tonal character is otherwise very similar, exhibiting the same smooth and well‑balanced sound. Both models also produce a usefully wide sweet spot. In the majority of home studios, the 2328Ps would have more than enough low-end capability without adding the sub (and, indeed, in smaller rooms subs can create more problems than they solve).

If I were to be hyper-critical, I would say that both speakers have a slightly 'veiled' quality that tends to homogenise mid‑range and high‑end detail to some extent, but any such comments have to be made in context of cost, and within their price range these speakers actually perform very well. I found some of JBL's earlier monitor speakers to be too 'forward' sounding for my tastes, but if anything these lean slightly in the other direction.

Both speakers perform well when hooked up to the sub, and for music I found that the 80Hz setting worked well for both models. As long as the sub is balanced properly against the main speakers, it integrates in a very natural and unobtrusive manner, adding plenty of weight and depth. Again, the bass isn't as tightly controlled as with the best studio monitors, but it manages to avoid flabbiness and fills in the lower octave or two in a very credible way. As with all properly designed subs, the psychological outcome is that all of the sound appears to be coming from the main monitors.

Within their market sector, which I'd describe as mid-level, the LSR 2300 range offers a sensible balance of audio quality and value. If you put these speakers up against a 'money‑no‑object' monitor, they suffer from a slightly cloudy sound and a touch of bass‑end overhang — but as a balance tool for the project studio, they get the job done well, and you soon get used to the sound if you play commercial material through them to get your ears attuned. It's probably fair to say that the 2325P is best suited to smaller desktop systems, and while you could add the sub to beef up the low end, choosing a pair of 2328Ps with no sub would probably be a safer option in most domestic‑sized rooms. Where there's space to use the sub, it might make sense to team it with the 2328Ps, so as to create a system with plenty of headroom, but if the level requirements are more modest, the 2325Ps also integrate really well with the sub.

On balance, JBL have come up with a no‑frills set of workhorse speakers that can be combined to fit the needs of a range of budgets and differently sized acoustic spaces. Their audio performance compares well with that of other speakers in the same price range, and their smooth high end makes them very comfortable to work with on long sessions. Definitely worth a look, even if you think you don't like the sound of JBL monitors.

The LSR range come in slightly above speakers such as the Mackie MRs and Tannoy Reveals, putting them beween the entry-level models we all know and love and the more serious offerings you can get for around £1000$2000. Also in a similar price range are certain models from Prodipe, Dynaudio and Adam. However, when it comes to tonal similarities, those models with soft‑dome tweeters are likely to be closest to the LSRs.

LSR Range At A Glance

All loudspeakers offer a different take on what is an honest and accurate sound and, unlike many earlier JBL offerings, these models lean towards smoothness rather than clinical transient detail. They make very effective small studio monitors and combine a good overall tonal balance with a usefully wide sweet spot.