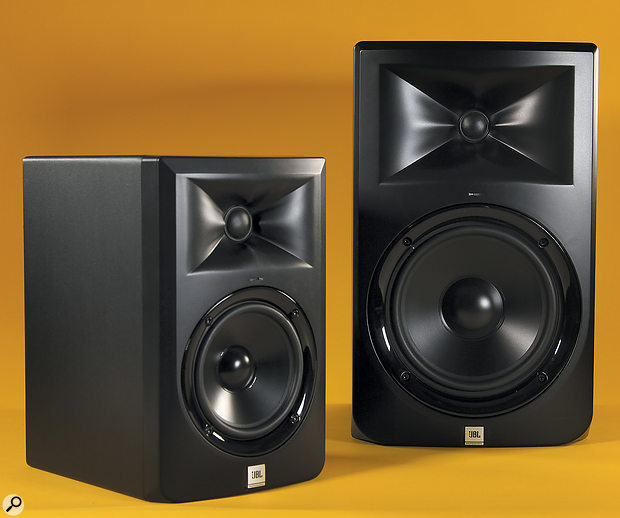 While the monitor market is now more crowded than ever, especially in the sub-£500$500 region, anything new from JBL targeting that sector is always worth a closer look, especially when, as our US cousins might say, it 'leverages' technology from their high-end studio speakers. Both LSR3-series models reviewed here are based on the same underlying technology, the main difference being that the LRS305 has a five-inch woofer and the LRS308 an eight-inch woofer. Both are two-way active monitors, and the first visual clue to them being something out of the ordinary is what looks like an unusually large HF horn flare. This is in fact JBL's 'Image Control Waveguide', and though initially developed for their vastly more costly M2 Master Reference Monitor, the company have applied the same flare geometry to these much more compact and far more wallet-friendly monitors.

The secret to the waveguide is in the fine detail of the shape of the flare, in particular those 'Klingon forehead' ridges in the middle of the four sides. In addition to managing dispersion, the waveguide is also designed to time-align the tweeter with the woofer. In theory, by precisely controlling the horizontal and vertical dispersion of the HF unit, and by minimising phase issues at and around the crossover point, this waveguide approach should lead to a better sense of mid-range focus,as well as a wider sweet spot.

Another novel design feature is the specially shaped 'Slip Stream' bass port, which is designed to reduce port wind noise while extending the low-end performance by virtue of tuning the cabinet. This port features a specially shaped taper with a rounded exit that is located on the rear of the cabinet.

Also to be found on the back panel are separate balanced XLR and TRS-jack inputs, a detented level control (with 0.5dB steps), a -10dBV/+4dBu input sensitivity switch, and a pair of three-way slide-switch adjustments. These each have settings for +2dB, 0dB and -2dB, and allow adjustment of both the HF and LF ends of the spectrum. There are no external heatsinks other than the rear panel itself, as the onboard Class-D amplifiers and switching-mode power supplies run much cooler than conventional Class-AB amplifiers.

Mains power, which connects using the usual IEC socket, can be 50 or 60 Hz in the range 100 to 240 V AC. Magnetic driver screening is included for those working with nearby equipment that is affected by magnetic fields, such as old-school glass CRT displays.

The sides of the cabinets, which have radiused corners, are made from a plastic-foil-covered board (presumably MDF or similar), while the waveguide flare is moulded into the profile of the curved, rigid plastic baffle.

The long-throw woofer's cone is fabricated from a well-damped, woven composite material that aims to combine structural rigidity with low resonance, and a smooth trim ring around the woofer ensures a smooth transition from cone to baffle. Many JBL designs feature metal-domed tweeters, but both of the models here employ a one-inch soft-dome, neodymium-powered tweeter for the highs. A white power indicator LED is located just beneath the flare.

Some speakers benefit from being 'run in' for a few days to soften up the driver suspensions, but JBL do this job for you by giving each speaker a 100-hour burn-in period at maximum level. This process also helps weed out early failures, so should lead to significantly fewer problems once the speakers reach the end user. By designing the LSR3 range of speakers in the US but manufacturing them in China, JBL have managed to come up with a series of monitors that incorporate some novel innovations, yet are extremely competitively priced for the project-studio market.

Taking the LSR305 first, this model is powered by a pair of 41W Class-D amplifiers (one driving the dome tweeter, the other the woofer), and both amps are fed by an active crossover. Though small, at 298 x 238 x 251 mm, and light, at 4.6kg, the LSR305s are specified with a 43Hz to 24kHz frequency response, and can achieve a maximum peak SPL of 108dB (C-Weighted). 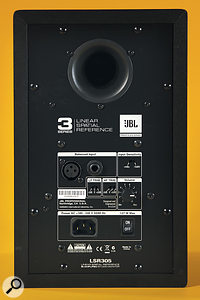 The rear-panel controls for bass and treble response, level and input sensitivity are common to both the LSR305 and LSR308.With its eight-inch woofer and larger waveguide flare, the LSR308 is both a little louder than its little brother and capable of a more extended low end. The amplifiers have been increased in power to 56W per driver, while the lows on this model extend down to 37Hz. The maximum SPL capability (again, C-weighted) is 112dB. Weighing substantially more than the LSR305s, at 8.6kg each, the LSR308s measure 419 x 254 x 308 mm.

I set up both models so that I could make quick switches between them and a couple of my own familiar speakers for comparison purposes. My listening tests revealed that the LSR305s and LSR308s have a very consistent family sound, though with noticeably more bass depth from the larger LSR308s, just as you might expect. Bass instruments still come over quite solidly on the LSR305s, but without those chest-vibrating deep lows. There's a great sense of focus and excellent stereo imaging, perhaps at the expense of a slightly 'forward' upper mid-range. I could hear the same kind of tonality when tapping the plastic flare with a fingernail, so maybe there's just a little coloration being added by tiny resonances in the material. In any event, this is fairlysubtle and doesn't make for a fatiguing listening experience. There is in fact more of a three-dimensional aspect to the sound than I hear from most budget monitors, as well as a usefully wide sweet spot, so that shaped waveguide flare is clearly doing something useful.

Since they are rear ported, you have to be a little careful when positioning the speakers relative to walls (this is especially true for the larger LSR308s), and even when spacing these a metre or so from the wall I found there was still a hint of 'pluminess' to the sound of bass guitars and kick drums, probably attributable to the inevitable LF time smearing that goes hand in hand with port tuning. Realistically though, this attribute is evident with most ported monitors, and it is not excessive in this case. There's always that rear panel switch you can use to drop the bass end by a couple of dBs if you find the lows too lively in your own room.

Any appraisal of these speakers has to be made in the context of their supremely attractive price, and even though we've seen some excellent budget speakers enter the marketplace in recent years, these monitors certainly deserve to be on your short list for auditioning. The LSR305s offer great clarity and sound adequately solid without the deep lows playing havoc when working in a small or acoustically unsympathetic room. The LSR308s would suit a slightly larger studio where its deeper lows can be accommodated without problem. Both can run at more than enough volume for comfort when used close up as intended, and both provide a detailed window into the mix with clear stereo imaging and a stable phantom centre image. As ever, more money buys more finesse, but with these two speakers JBL certainly deliver a lot of monitor for very little money and such technical compromises as do exist are very minor for speakers in this price category.

In addition to all the usual suspects, check out the new Presonus Eris monitors and Equator's five- and eight-inch models.

Both these monitors give a good account of themselves and stand comparison with anything else in the same price bracket and with many speakers costing a lot more. The smaller LSR305s work particularly well in smaller rooms.