These monitors can automatically EQ their frequency response to compensate for your room acoustics. But how effective is this technology in practice? 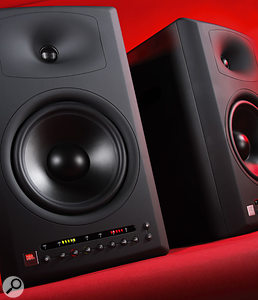 The latest LSR-series monitor is the 4328P, a fairly typical two-way active design, but with sophisticated DSP control and configuration facilities: EQ presets, input selection, remote-control functions, and the Room Mode Correction (RMC) system. The 267 x 438 x 269mm speaker cabinet is built from 19mm MDF with an injection-moulded ABS front baffle, and weighs 15kg. The rear panel carries the amplifier chassis, all connections, and a large flared reflex port, while the base panel has four M6 threaded inserts for Omnimount-style brackets.

The eight-inch woofer has a polymer-coated paper cone and a two-inch voice coil with neodymium magnet. The tweeter is a one-inch soft silk-dome design set into JBL's bespoke waveguide. Each drive unit has a Class-AB monolithic amplifier, with 150W for the bass driver and 70W for the tweeter. Self-generated noise is claimed to be a low 13dBA at 1m. Fourth-order digital Butterworth filters cross over at 2.6kHz, and the system bandwidth is a very creditable 50Hz-20kHz ±1.5dB. Maximum continuous SPL is quoted as 106dB at 1m, with instantaneous peak SPLs (per pair) of 118dB at 1m.

XLR and TRS-jack socket inputs accept analogue signals, with +4dBu or -10dBV switching, and digital signals can be input on XLR (AES) and phono (S/PDIF), with loop-through outputs for digital signals. The required input source can be selected from the speaker's front panel. Other socketry includes a 3.5mm input socket for a supplied calibration microphone, a USB socket, and two RJ45 network sockets employing the proprietary HiQNet protocol. Eight DIP switches allow each speaker's position to be identified within an 8.2 surround configuration, and five LEDs indicate the selected input source and mode. In the case of digital inputs, the speaker automatically selects the left- or right-channel data according to the speaker position set on the DIP switches. 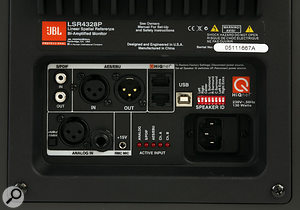 Photo: Mike CameronThe front baffle contains ten slim illuminated buttons to configure the speaker. The Solo button mutes all other speakers, and the RMC button accesses the Room Mode Correction function — for more details of this see the 'Room Mode Correction' box. The EQ button activates high and low shelving filters, which can be adjusted with the next two buttons. The EQ provides ±2dB of gain in 0.25dB steps from turnovers which default to 500Hz and 2kHz, although the supplied Control Centre software allows these to be finely adjusted across 19.7-1000Hz and 1-20.2kHz ranges respectively. The next button recalls any one of six factory EQ presets. The final button cycles through the three input options. A large 31-segment LED bar-graph display above the buttons defaults to showing an SPL level meter, but also indicates the various configuration settings when appropriate. 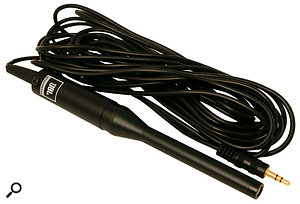 Photo: Mike CameronThe LSR4328P is the first speaker system to employ automated DSP techniques to generate room-matching EQ. The system is able to apply a 3-12dB notch filter at any of 73 different centre frequencies between 20Hz and 160Hz (at 1/24th octave centres), with a bandwidth adjustable from 1.4 octaves to 0.09 octaves. The idea is that this filter will reduce the effects of the most prominent standing waves at the listening position, as measured using a supplied omnidirectional measurement mic (shown). This mic is terminated with a 3.5mm plug that connects to the front left speaker. Pressing and holding the RMC button on any speaker initiates a test signal which comprises two cycles of a rapid sweep tone from each speaker. This is captured by the mic and analysed to establish the appropriate filter settings for each speaker. It also adjusts the nominal speaker level and the delay-line settings for each speaker's tweeter. The process takes less than 30 seconds for a stereo pair, and not much longer for a complete surround set up. Once completed, the speaker operation returns to normal and the RMC filtering can be accepted or bypassed using the speaker's RMC button.

I ran the RMC test four times to compare results. The first two were with the mic in the listening position, and although the two settings were slightly different, the discrepancy was only in one channel and relatively small. However, moving the mic forwards or upwards by only six inches produced radically different responses, demonstrating how standing waves vary considerably throughout a room, and how inherently simplistic this kind of electronic correction is.

Setting up and configuring the speakers was pretty straightforward, although it's important to set the DIP switches properly before powering up. I initially auditioned the speakers with the EQ and RMC switched off, to assess their raw performance — and I was impressed! For a modest-sized monitor speaker, the LSR4328P has a wide, well-balanced spectrum, with an equally expansive and stable stereo image. Whereas other LSR monitors have been a hint hard in the treble, this new model's soft-dome tweeter is very smooth and delicate, allowing extended listening at serious levels with minimal fatigue. Power handling is impressive, and the bottom end is well controlled and tuneful in this ported design.

The EQ controls allow very fine tailoring of the spectral balance, and boundary conditions can be handled well using the RMC function, provided that you remain within a fairly small sweet spot. I'll admit that I'm not a huge fan of using DSP notch filters to compensate for room problems — there are better ways of cracking that particular nut, and they all involve sorting out the room, not the monitor. However, in situations where room problems cannot be addressed for practical reasons, this is a convenient workaround. I preferred to spend most of my time listening with the RMC function switched off, as I felt that this left the bass end sounding fractionally more open and less congested.

Given the UK price, the LSR4328P is a good monitor which provides a well-balanced, neutral sound stage with good resolution and imaging and a well-controlled and extended bottom end. The high-tech functionality will appeal to many, and the remote control options will remove the need for a monitoring controller in some situations. The RMC functionality takes the donkey work out of optimising the speaker EQ settings to a degree, but is no match for thoughtfully installed acoustic treatment. 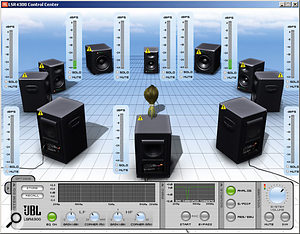 Photo: Mike Cameron Included in the accessory pack is a handheld infrared controller, which duplicates each speaker's front-panel functions, and also adds monitor control functions such as volume, dim, and individual speaker solos for up to 8.2 channels. Also included in the accessory pack is a CD-ROM containing JBL's Control Centre software. I loaded and ran this on an old 1MHz laptop without any problems, connecting to the loudspeakers via USB 1.1, and everything appeared to work perfectly. The graphical software interface interrogates the connected speakers to establish what is on the network, and then allows you to monitor and control all setup parameters, including the response graphs of the RMC filters.

A well-balanced active monitor providing good insight into a complex mix, with stable imaging and impressive dynamics. The remote-control options are useful and the infrared handset provides some monitor-controller functions. The automatic RMC room compensation is quick, easy, and reasonably effective, although it cannot replace proper acoustic treatment.