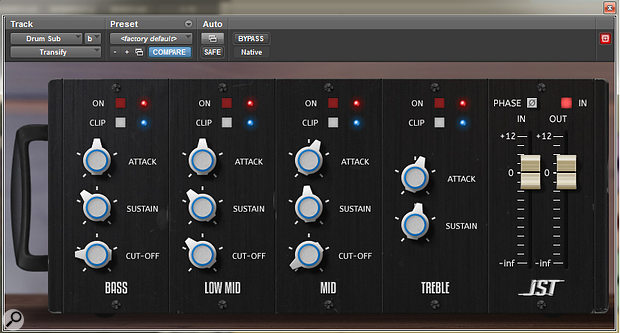 Many well-known engineers are now lending their names to plug-ins, and now metalcore specialist Joey Sturgis has joined the fray.

Joey Sturgis seems like a very busy man. As well as running his own recording studio in Connersville, Indiana, and being a leading producer in the metalcore scene (see interview in September 2014’s SOS), he finds time to develop an ever-increasing collection of plug-ins and audio processing tools. These present a slightly different approach to some common stages of the mix process, whilst also offering a flavour of his unique style of production and mixing. Under review here are two types of drum-focused multiband processing tools — Transify and DF-Xcite — and a feature-heavy guitar-amp emulation plug-in called Toneforge Menace. Transify and Menace are marketed under the Joey Sturgis Tones banner, while DF-Xcite is a product of Drumforge.

Since SPL first launched their Transient Designer, numerous other companies have brought out their own transient processing tools. Though the technique is potentially very powerful, many of these tools remain fairly simple in terms of processing options: typically, you might have the choice of boosting or attenuating the attack and release portions of the signal in a single frequency band, or perhaps two. Transify by Joey Sturgis Tones, however, is claimed to be a full multiband processing tool, providing transient adjustment across four independent and adjustable frequency bands which are helpfully labelled bass, low mid, mid and treble. Each band has its own ‘in’ switch, as well as the option to engage a built-in ‘pre-band clip’ algorithm which prevents digital overs when used aggressively. The feature set is completed by two well-thought-out additions: a polarity switch to check the effect the plug-in is having over your all-important drum phase relationships, and input and output faders so you can manage your gain structure and match the levels of the processed and bypassed signals.

I’m not usually a fan of heavily stylised plug-in interfaces, as I find them a little distracting. However, I liked the 500-series-rack look of Transify, and its nice clear layout means you can get started with a minimum of fuss. My main interest — and I expect most people’s — was how it fared on drums, so I put it to work straight away on my close drum mics, with a view to seeing if it gave me anything that my more basic transient processing plug-ins couldn’t provide.

One of the main applications I use transient shapers for on drums is to dial back the amount of cymbal bleed without using a gate. This worked really nicely with Transify, as I was able to focus in on just the higher cymbal-heavy frequencies with the ‘treble’ band and let the lower part of the drum sound retain its natural sustain. The ability to focus in on different frequency areas is of course the raison d’être of this plug-in, and the option to tighten up the lower mids whilst allowing the sub-200Hz frequencies to sustain a little more worked really well on a boomy kick drum sound from a live recording.

It was on some overhead drum mics, however, that I found a real substantial use for Transify. One track I was mixing at the time of writing this review had a pair of overheads that, whilst sounding really nice cymbal-wise, were far too ‘roomy’ to work in this busy track. Being able to almost EQ the attack and release on these overhead mics allowed me to ‘suck’ all the undesirable room elements out, whilst allowing the cymbals to sustain naturally, and very much still do their thing.

I found Transify generally to be a really handy plug-in when used carefully, and it’s obviously been designed as a refreshingly real-world mix tool. As with all multiband processors, however, it’s very easy to tie yourself in knots with the power you have in your hands, and I did find that it wasn’t what I’d call a transparent-sounding option when the lower frequencies were affected less subtly. Also, despite my pushing the plug-in quite hard through the review period, I never really got a sense of whether the ‘clip protection’ was doing anything — but maybe that’s the point. Given its very competitive price, though, I would certainly recommend giving Transify a try on your drum tracks. 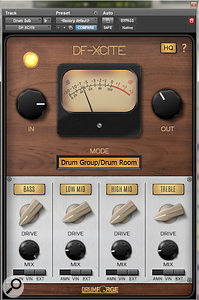 DF-Xcite is another drum-focused, multiband processing tool: in this case, a harmonic enhancer that splits the input signal into four bands and applies saturation separately to each, to generate additional harmonic content and brighten the signal. The frequency split points are not user-definable, though; instead, it comes with a number of drum-centric presets or ‘modes’ that shape and tailor the crossover points in a fashion deemed appropriate for kick drums, snare drums, drum group tracks and so on. The four bands are, again, labelled bass, low mid, high mid and treble, and each has its own level/drive control, plus a ‘blend’ knob to allow parallel processing. Each band also has the choice of three different ‘flavours’ of saturation: American, Vintage and Extreme! To complete the control options, DF-Xcite has input and output gain controls, with which you can ‘drive’ the saturation through the whole plug-in, as well as a bypass and a ‘HQ’ switch which engages an oversampling option at the cost of higher CPU load. I’m never quite sure what to make of this type of feature, and as I would rather like to have the best possible sound quality, I left it in high-quality mode for the duration.

Getting stuck in with a drum mix, I found some of the presets to be useful starting points for working on the sound of individual drums, although I almost always found myself significantly dialling back the amount of processing being suggested. Auditioning the different styles of saturation, I leant more often than not towards Vintage, as it was a bit more subtle than the others — though if you’re looking to create more of an obviously effected sound, there’s plenty to play with and it can certainly sound very unsubtle, not to mention great fun. I personally really liked using DF-Xcite on a drum bus, and I found it a great tool for dialling in a little more brightness or low-mid impact across a whole drum mix. In fact, I’ve just finished mixing an album where it was strapped across my drum bus on every track. With multiband parallel processing and the option to have different styles of saturation across four different frequency bands, it provides a hugely powerful set of processing tools in what is a very simply laid-out plug-in.

The flip side of this is that when used heavy-handedly, or with less than ideal monitoring, plug-ins like this have the ability to wreck your drum sound! However, used with care alongside more traditional mixing tools, it can be an excellent shaping option for the later stages of a mix; and if you work with electronic beats or with genres that lend themselves to more dramatically altered drum sounds, then you’ll find plenty to play and experiment with here, in a nicely laid out plug-in, and for a very reasonable price.

Menace Without Much Money 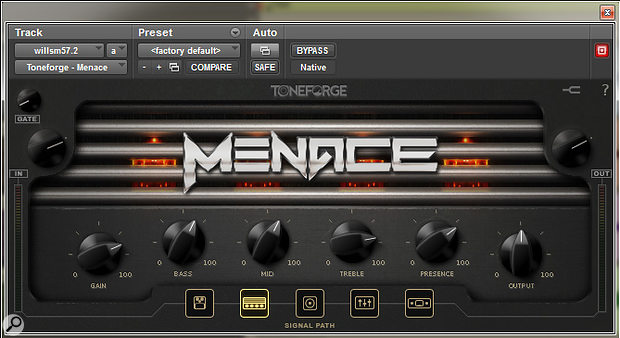 The last plug-in in this trio is unashamedly targeted at the in-your-face, aggressive music with which Joey Sturgis has made his name. Menace is an amp simulator plug-in that packs a simple but comprehensive set of guitar processing and mix tools into a single unit. The controls are displayed in layers, and give you an amp simulator with the usual gain and tone controls, a distortion/overdrive style pedal, a basic mic selection and positioning option, full parametric EQ and a limiter. Oh, and you also have a universal input and output gain, a basic noise gate and a signal-ordering layer that lets you decide where in the chain you want each set of processing to be positioned!

Plenty to play with then, and the mix processing tools are very useful additions, allowing you to do most of your guitar mix processing in a ‘one-stop shop’ fashion. The amp itself has the option to be bright or really, really bright, and with the combination of amp gain and distortion pedal, you have a range of aggressive distortion options. The mic selection layer offers a choice of a virtual Shure SM57, Sennheiser MD421 or a capacitor mic, which can be moved around in relation to a virtual speaker cabinet. I find these types of processing a little gimmicky, but it does give a flavour of what those mics might sound like, and moving the mic can offer useful tone shaping, particularly if you’re layering up multiple guitars.

How does it sound? The clue is in the name, and it’s certainly not subtle. It doesn’t sound like an authentic emulation of a classic valve guitar amp by any stretch of the imagination, and is not really trying to do so. Menace offers varying degrees of bright, aggressive, spiky guitar tones that are not something that you would find pleasant to listen to in isolation. If you work with metal-type genres, however, and you would want a guitar tone to tear someone’s head off or cut through a dense, heavy mix or arrangement, you’ll get plenty of value from this very reasonably priced and full-featured guitar processing plug-in.

Joey Sturgis’ plug-ins are designed to meet real-world mixing needs, and pack a lot of power into a format that makes it easy to get results quickly — or, if you’re not careful, to go too far!