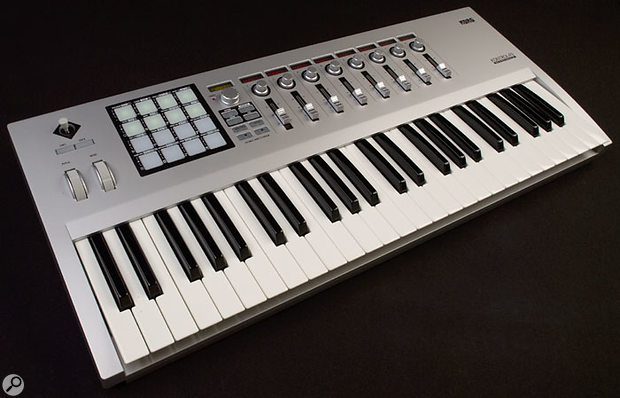 Korg's Microkontrol was a highly versatile, yet compact MIDI controller — but perhaps, with its three octaves of miniature keys, it was too compact. The Kontrol 49 looks set to put that right with its four-octave, full-size keyboard.

These days we are blessed with a wide choice of brilliant, affordable music software whose power and versatility often puts far more creativity at our fingertips than the hardware which inspired it, and so, not surprisingly, most of us are becoming more software-centric in our music-making. Which is why we're seeing a growth industry in hardware control surfaces, and particularly those that are easily configurable to work with many different programs, often simultaneously.

Korg's new Kontrol 49 is intended as just such a 'universal' device and one particularly suited to the computer-based musician whose wallet and studio space are both relatively modest. Its grand title is 'USB/MIDI Studio Controller': in a nutshell, it's a controller keyboard equipped with a fair amount of knobularity plus a great deal of programmable MIDI intelligence enabling it to interface at the deepest level with any music software (or hardware) you can shake a MIDI parameter at.

If you think those sleek silvery looks are Korgishly familiar, then you're right. Look into my eyes, look into my eyes... and cast your mind back to the Korg Microkontrol reviewed by Paul White in SOS March 2004. Those with long memories (or with browsers pointing to www.soundonsound.com/sos/mar04/articles/korgmicrokontrol.htm) might recall the deal here: a neat velocity-sensitive keyboard married to eight sliders, eight rotary controls and a master control, 16 velocity-sensitive drum machine-like trigger pads (also doubling as data-entry buttons), plus a programmable vector-control joystick to handle such performance features as modulation and pitch-bend. There was also an array of colour-coded, eight-character LCD 'scribble strips' above the faders and rotary controls to display parameter names and also give instant feedback on changes to parameter values.

In terms of its flexibility and intuitive handling, the Microkontrol generally earned itself a big thumbs-up from Paul. However, it was precisely in the big thumbs department that it wouldn't score so highly, being equipped with mini keys, and only 37 of them at that. So Korg have administered a portion of Alice's 'Eat Me' cake, and created the more grown-up version you see here, sporting 49 or four octaves of full-size keys (which incidentally, can be transposed up or down to give you a range of C1 to C9).

The keyboard itself is of the non-weighted variety, and is velocity sensitive with eight programmable velocity curves to suit different styles. However, a true player will bemoan the fact that there's no aftertouch. As on a lot of keyboards/synths, pressure control has to be applied through either the programmable modulation or pitch-bend wheels — features which were missing on the Microkontrol. A Vector joystick is also present with separate control messages assignable to the X (up/down) and Y (left/right) axes. Compared to the rest of the package, which feels solid and well-built, this control does seem rather flimsy and lightweight to the touch.

If my maths is correct (and counting the keyboard as only one) the Kontrol 49 offers a total of around 40 different controllers, each of which is extensively programmable. The shorthand for a complete set of controller assignments is the word Scene, and like the Microkontrol, the Kontrol 49 can store up to 12 Scenes on board with the trigger pads providing the means to switch between them. As it comes out of the box, it's preloaded with a variety of sample Scenes primarily designed to show off its muscles controlling the various demo packages which are included on the installation CD-ROM. However, these are just the tip of the iceberg: the CD-ROM has an extensive collection of templates covering all mainstream packages from the major software houses, including Ableton Live, Propellerhead Reason, IK's Sampletank 2, most NI instruments, and the major sequencers. 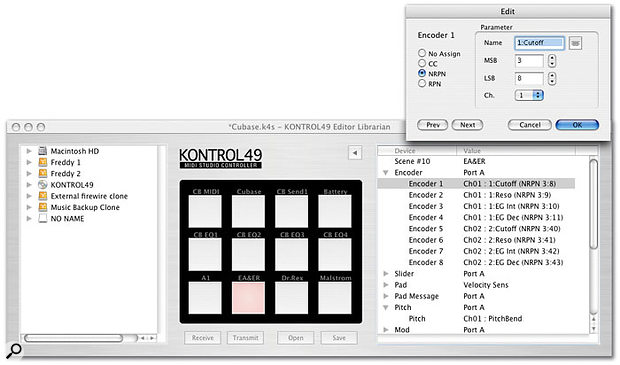 The editor/librarian enables you to speedily assemble sets of Scenes and gives you visual access to all the Kontrol 49's various control elements. Double-clicking on any item brings up a smaller menu (shown top right) where you can quickly input values and name names. When you're finished, you can upload the Scenes via USB to the keyboard. Names of parameters appear on the LED scribble strips to give you vital feedback on which slider/rotary control is assigned to what, though the eight-character limit makes some descriptions rather cryptic.Photo: Mike Cameron

Korg also include a brilliant scene-management software package, which in terms of functionality goes well beyond the original librarian software that was included with the Microkontrol. This software offers complete on-screen programming of all Kontrol 49's assignment and functions, enabling you to very easily modify the presets or create custom Scenes of your own, assemble them into Scene sets and then upload them to the keyboard.

Using the editor I was quickly able to assemble the included templates into a custom Scene set, giving me control over my Cubase mixer and EQ screens, Steinberg's A1 software synth, Native Instruments' Battery (which I use as a VST instrument within Cubase), and also a Korg Electribe.

Of course, you can also use the Kontrol 49's front panel to edit patches or create your own from scratch, but to be perfectly honest, it really is a lot less hassle and kinder on the tips of your fingers just to fire up the editor and do it all via the big screen. Unfortunately, like the USB drivers, the editor software is only for users of Windows XP and Mac OS 10.2 and above. What's more, 12 scene memories is not that many, and if you need to control lots of different packages (or aspects of packages) then you will probably find yourself swapping between different Scene sets quite regularly.

Like the Microkontrol, the Kontrol 49 is designed to interface with your computer through a USB connection, which also provides the necessary power to the keyboard. There's an included 9V wall-wart adaptor if you've got too many devices on your USB connection for this to work.

USB drivers are provided for Windows XP and Mac OS X (10.2 or later) and installation on to my shiny new iMac G5 was simple and straightforward. But my laptop runs Windows Professional, to which the Kontrol 49 is only any good as a MIDI keyboard connecting through its five-pin sockets.

One thing to get your head around when setting up the Kontrol 49 with your software is that although it is equipped with two physical MIDI Outs and one physical MIDI in, what the computer actually sees are five ports. Two of these are virtual routes through which the Kontrol 49 sends note and controller data to your software, and another is the virtual route by which computer transmits info (typically program dumps) back to the Kontrol 49. This means that you can use the unit both as a USB controller for your software and as a one-in/one-out MIDI interface between your computer and external hardware.

In both the Microkontrol and the Kontrol 49, Korg have succeeded in producing a cost-effective way of providing flexible and relatively intuitive control over a typical collection of studio software. If you're the kind that knows your NRPNs from your RPNs and devours MIDI implementation charts in the way others do romantic novels, then the level of programmability you can achieve with the Kontrol 49 is impressive. But the good news is that if you're the sort who doesn't particularly want to get down and dirty with arcane MIDI parameters, then the included templates do seem to work straight out of the box.

Personally, I think it's actually the combination of the hardware with the editor/librarian that really makes this an appealing package, which makes the cheese very hard indeed if you're not running the right operating system.

The Microkontrol deserved its positive review, and with the benefit of its refined software and its bigger complement of full-sized keys, the Kontrol 49 is a welcome extension (if you'll pardon the pun) of the original offering.