It's their first analogue synth in 25 years, but is Korg's Monotron a toy or a tool? 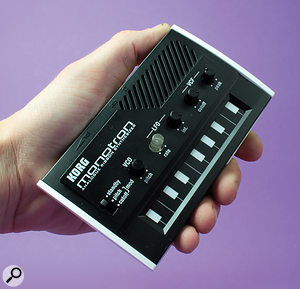 The Korg Monotron created quite a buzz when announced at this year's Musikmesse, maybe because it came completely out of the blue. After all, it is the first truly analogue synthesizer from Korg in 25 years.

The review model slipped in anonymously amongst my morning post. Only when liberated from its Jiffy bag did I realise that (a) it had actually arrived and (b) that it was amazingly small. My first mobile phone was bigger than this! Shunting aside the bills and credit card spam, I switched it on. Time passed, my coffee grew cold and the dog ate my toast, but I was oblivious. Scepticism morphed into appreciation.

Cute and stylish in black and white plastic, the Monotron weighs about 95 grams and measures just 12 x 7cm. It is roughly the size and weight of an old‑style music cassette. Even so, five surprisingly decent‑feeling knobs, a combined power and modulation switch plus a volume control all fit in neatly, somehow. It is powered by two AAA batteries (included), with battery life estimated at eight hours.

Nestling in a small recess of a few millimetres, the short ribbon keyboard (printed in inverse colours) spans a little over an octave. The recess might hamper large, manly fingers so if yours are wider than about a centimetre and a half, it could be time to reach for the cotton buds, Nintendo stylus or other gentle prodding accessory. Even if your fingers are slender, a stylus offers precision while simultaneously satisfying any lingering Stylophone fixations.

In common with Rolf's famous miniature keyboard, the Monotron has a simple gated envelope. Make contact with the ribbon to hear the oscillator, take your finger off and it cuts out. The ribbon's keyboard is a visual aid to hitting the correct pitch because, unlike the Stylophone, the transitions between notes are seamless and theremin‑like. Priority is given to high notes, should you get two fingers involved. With practice, you can achieve a splendidly eerie vibrato by wiggling your finger (or stylus) vigorously from side to side. The ribbon's output range is adjustable via a small screw at the rear.

If you are still questioning whether or not Korg have branched out into the toy business, consider what is tucked away inside — thanks to surface-mount technology. The tones that leap from the onboard speaker are not modelled. They're not sampled either; they're real analogue. It's time to welcome back acronyms of yore, because what you hear is a VCO, filtered by a VCF and modulated by an LFO. It just so happens that these components are on a scale that would have been considered borderline bonkers until recently.

Both the oscillator and low‑frequency oscillator generate sawtooth waveforms. In the case of the former, sawtooth is often considered to be the primary synthesizer waveform, packed, as it is, with harmonically rich tones ideal for low‑pass filtering. A single knob — Pitch — covers all useable frequencies in one smooth sweep. This knob, the ribbon and a good pair of ears should put simple tunes and bass lines within your grasp. I can't say whether it's possible to become Yehudi Menuhin on this thing, but if you're like me, your performances won't ever be called sterile or clinically perfect. For example, I was accused of hurting a small animal in the studio the other day when, in fact, I was playing the Star Trek theme rather beautifully.

For modulation purposes, the choice of a sawtooth for the LFO naturally favours pulsing notes and blippy sci‑fi effects. Initially I wondered if a sine or triangle wave might have been better. But with ribbon‑induced vibrato literally at your fingertips, sawtooth is probably the more versatile choice. The LFO's Rate knob is clear plastic and has an amber LED underneath to show modulation speed.

Having decided whether the LFO should modulate the VCO or VCF, you quickly enter a realm of wailing sirens, tortured felines and killer space-bees. Madly twiddling the Rate and Intensity knobs together becomes an almost joystick‑like experience. The LFO's range is impressive, from a languid 14 seconds to well into the audio spectrum (around 900Hz, although this can vary with temperature). Audio-rate modulation is the source of the Monotron's wildest excesses, serving up discordant cross‑modulation one minute and the sound of locusts sizzling in a frying pan the next.

Which brings me to the filter — and its two essential knobs: Cutoff and Peak (resonance). Remarkably, this is the very same low‑pass filter that graced Korg's much prized MS10 and MS20 synths. The tonality is unmistakable, especially when you crank up the resonance. The filter's dirt and instability always played a large part in the sound of a Korg MS20, and I can see many Monotrons flying out of the stores on the strength of this alone.

As I basked in endless filter sweeps, I realised that the ribbon also influences the cutoff frequency. Notes appeared to be brighter towards the top of the ribbon. A quick check of the signal diagram confirmed this to be the case, and while tracking is fixed internally, its effect is definitely worthwhile.

At the back, from left to right, are the headphone output, aux input, volume control and a screw to adjust the range of the ribbon controller.

The built‑in speaker does an admirable job of keeping the Monotron self‑contained. At maximum volume and with resonance set to 'evil', you can profoundly irritate fellow travellers on the train, or ward off shambling lurkers in the subway. But to really announce your presence to the world, you're going to want to let rip through something larger. Fortunately, there are a couple of mini‑jack sockets on the back: a headphone output (when used, it disconnects the internal speaker) and an auxiliary input.

This is where the fun goes into overdrive. Connect the mini‑jack output to your mixer (probably adding delay or reverb) and you start to really hear the Monotron's... authenticity. The filter cuts through like a knife — one of those slasher ones that always makes a mess. Pretty much the first thing you'll want to do is put something through it. You don't need to touch the ribbon to hear the filter's effect on your audio: just plug in and experiment with the filter and LFO knobs. Unusually, the external signal doesn't patch out the VCO, so you're free to throw that in too, whenever you like.

The filter sounds great when processing the Monotron's own oscillator, but it's a different beast entirely when unleashed upon unsuspecting audio. Use it to add analogue colour (or inflict real damage) on any material you like. Drum loops, other synths; I found the results especially impressive on keyboards and samples, but anything is fair game. As filters go, this one is never polite and sometimes teeters on the very brink of chaos.

Korg are a wily bunch who rarely miss a trick. I remember it being a no‑brainer to spend 20 quid on their fab little DS10 synthesizer (for the Nintendo DS) and I don't see the decision being any harder this time. Having adjusted to the idea of a synth that can be carried everywhere, I started feeling the urge to go and find a cave — or to head into the woods and pester a few birds. Others will consider its potential for theatrical sound effects or for busking, but, whatever your plans, I suspect it won't be long before the Monotron crosses over into tracks and live performances. The aux input, meanwhile, makes the Monotron into a desirable analogue processor, whether for enlivening other instruments or as an outboard effect in your DAW.

Complaints are almost irrelevant. Admittedly, it's not entirely noise‑free but the slight background hiss is containable and didn't cause me any grief. And sure, it would have been nice to have something slightly bigger, with a ribbon twice as long — so you'd have more scope for tunes. Come to think of it, I'd bid for a built‑in spring reverb and a noise generator too. Of course, if the Monotron does well — as it deserves to — a future MkII could include these features and more.

It could be that the Monotron's most significant contribution is not its own quirky and unique nature — after all, there's nothing remotely comparable around — but what it represents. It's 2010 and we're looking at a brand-new, fully analogue synthesizer from a major Japanese company. You can now obtain a wide range of discrete surface-mount components and build classic analogue circuits once more, but in a fraction of the space they once required. As computer‑based soft synths are increasingly leaving digital hardware behind in terms of capacity, features and fire-power, why slavishly model analogue when you can affordably build the real thing?

Anyway, regardless of its possible status as the first pebble in a new analogue avalanche, the Monotron is brilliant fun — either by itself or with friends: a miniature synthesizer with a unique personality.

Although it could be mistaken for a toy, the Korg Monotron is a real synthesizer with a real filter. What's not to like?