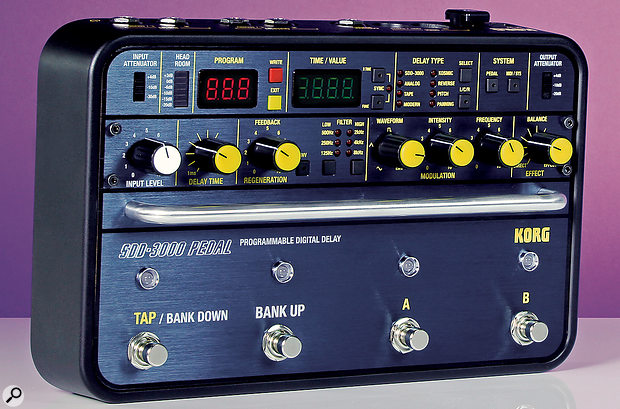 A modern stompbox take on a classic digital delay unit — what’s not to like?

People have lusted after ancient guitars and vintage analogue outboard gear for years, but in recent years people have also started getting misty eyed about early digital equipment such as vintage Lexicon reverbs, as well as certain delay units. One digital device to have triggered lustful thoughts is Korg’s rackmount SDD–3000 delay unit, which was launched way back in 1982. It hasn’t done its reputation any harm that U2’s The Edge is a regular user and has an enviable stash of the original rackmount units — or that acclaimed producers, including William Orbit, have extolled its virtues.

The Old & The New

Given the SDD–3000’s enduring popularity, it’s no surprise that Korg have decided to bring it back to production, just as they’ve revisited the past in their analogue synth line. But the new SDD–3000 is not a slavish reincarnation: yes, you get everything you need to give you that classic SDD–3000 sound, including a modern take on its preamp stage (often used as a clean boost with ‘character’), but you’re treated to a whole lot more besides. To achieve this, Korg have harnessed modern DSP technology to allow them to add features and improve the specifications. They’ve also put this delay unit into a robust pedal format, which should make it much simpler than the original hardware to incorporate into a live rig, and for guitarists in particular to control it.

Despite the form factor, it’s almost an insult to call the SDD–3000 a ‘delay pedal’ because it is so much more than that description suggests. In addition to being able to emulate just about any kind of delay, modern or retro, it can also produce most of the familiar modulation effects and even incorporates pitch shifting and reverb into some of its party pieces.

In addition to the original SDD–3000 voicing, today’s SDD–3000 offers a further seven delay types — Analogue (CCD), Tape, Modern (clean DDL), Kosmic (pitched reverb), Reverse, Pitch and Panning — and the delay time can be extended from 1ms to 4s. The SDD–3000, Analogue, Modern (DDL) and Tape modes are pretty self explanatory, but the others are worth explaining in more detail. Kosmic creates a shimmery ‘crystal’-type effect that seems to combine one octave of upwards pitch shifting with reverb, rather than delay. Reverse plays blocks of sound backwards to fake a reverse tape effect, while Pitch places a pitch shifter before the delay. Panning mode allows the creation and adjustment of stereo effects, and there’s even a ducking function that keeps the delay level low when you’re playing, but allows it to swell during pauses.

There are five selectable modulation waveforms, with random and envelope joining the expected waveshapes, and these morph from one shape to the next as you turn the knob. There’s MIDI for patch changing and patch dumping, and the unit supports mono or stereo operation. Three–way switches for input sensitivity and output attenuation allow for different I/O requirements, such as guitar, keyboard or effects loop connection, so both studio and live users are catered for.

One novel feature is that, in addition to stereo delays that bounce from left to right, you can also use the LCR button to give you delays that bounce left, right and centre. In this mode, independent feedback values can be set for the left, right and centre delays. It can store more programs than you’re ever likely to need (80), it displays the exact delay time just like the original, and you can even plug in an external expression pedal for more control. Separate three–position high– and low–cut filter switches are available for shaping the delay tonality, but despite all this the user interface remains very musician friendly.

By adding modulation to shorter delay times, with the possibility of also polarity inverting the delays, it’s possible to create flanging, chorus, vibrato, doubling, and pitch–modulation effects. For setting the delay time, you can dial it in directly (and independently for the left and right channels) or use the leftmost footswitch as a tap tempo input. You’re also able to set 11 different note values, ranging from whole notes to 32nd notes (adjusted when holding down the R Time and Fine buttons) so that you get the desired delay subdivision when tapping in a straight beat.

To keep the number of footswitches sensible, the memory is arranged as 40 banks of two patches, meaning two different delay effects are directly accessible when you’re playing. If you need any more than two delay settings per song, you either have to change banks using the first two footswitches or use a separate MIDI foot controller.

For bypass, you have the choice of active, which preserves any decay tails and also leaves the preamp in circuit, or (passive) hard, in which case a relay shuts off the delays as soon as you hit the switch. Should you choose to use the optional expression pedal, you’ll be able to adjust multiple effect parameters at the same time. The idea is that you set the rotary controls with the pedal at one end of its travel, set them again for the other extreme, then save the patch. Now the pedal morphs between one set of panel settings and the next so you can, for example, change delay and modulation parameters at the same time.

The inclusion of an expression pedal input adds to this unit’s versatility, as does the MIDI connectivity.The circuitry has a full 10Hz to 20kHz bandwidth, while the dynamic range of 94dB means that background noise won’t spoil the party. It’s also gratifying to note that the pedal runs from a standard centre–negative 9V power supply (included), so it should play nicely with other members of your pedalboard. On a practical note, the raised bar running across the front panel is very effective in keeping feet away from the controls.

The vast majority of what the SDD–3000 does is pretty self–evident from the front–panel controls, other than setting the note subdivisions, which I’ve already touched upon, and setting up ducking delays, which requires holding down the MIDI/Sys button and then adjusting the Intensity knob to set the degree of ducking. Having such an accurate readout of the delay time along with a Fine setting option means that you can set up very precise timings for those styles that depend on it, and I also approve of the input level metering.

The factory patches do a great job of showing off the range of sounds that can be created, but it’s also trivially simple to set up your own patches.

In terms of the sound itself, the SDD–3000 doesn’t appear to offer anything radically new, but it somehow manages to create a warm lushness that few other delay devices can challenge, and even with high feedback settings things don’t get too messy or chaotic. The delays complement the dry sound rather than fighting with it, producing what might be described as a liquid and musically involving result.

This decidedly mellifluous character (due to the analogue preamp circuitry?), which carries through to most of the other delay options too, is achieved without making the repeats sound soggy or dull (other than the mandatory softness of the analogue delay), though you can of course use the top and bottom cut filters to further shape the delay characteristics if you need to — adding low cut to a delay can be surprisingly effective in keeping things clean. Having separate left and right delay settings makes it possible to emulate a basic multi–tap delay, though there isn’t the option to emulate a true multi–head tape delay, which might have as many as four playback heads spaced at different intervals. 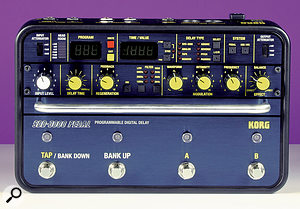 A clearer view of the front panel layout.I can’t quite put my finger on why the SDD–3000 setting sounds more musical than the modern, cleaner DDL setting — but somehow it does. It has warmth and smoothness but retains its clarity, and I find it easy to understand why so many people are fans of the sound. The same goes for the preamp: it doesn’t do anything obvious, but the sound just seems right.

Pitched delay can be adjusted anywhere from octaves to a subtle detune. As with many pitch shifters, the sound quality gets more ‘wavery’ the greater the pitch shift, and by the time you get to an octave up, it sounds like I imagine it would if somebody were to tickle an elf.

When it comes to analogue delay, the designers have managed to nail the ‘best of analogue’ tonality without also including the nasty aliasing and background noise that so many of those things produced at longer delay times. Having a choice of modulation waveforms makes it possible to stray beyond familiar territory where just a small amount of random modulation is great for adding a tape–like wander to the delays.

Plugging in an expression pedal gives you a great deal more ‘in flight’ control if you need it, and those MIDI options might come in handy if you have a larger rig that works under MIDI control.

During my tests, I fed the two outputs into two different guitar amps and didn’t experience any ground loop hum — though your mileage may vary depending on the nature of your own stereo setup.

Better Than The Original?

Summing up then, yes, the SDD–3000 may be a bit on the pricey side for a delay pedal, but if your playing style places a lot of reliance on delay, then I don’t think you’ll be disappointed: it sounds just fabulous. The sound quality, headroom and degree of control makes it just as useful alongside a DAW or mixing console as with a guitar, and for live use its versatility can also save a lot of board space, as you may not need those chorus, flanger and phaser pedals anymore. Recommended.

There’s nothing directly comparable: if you want the sound of the original SDD–3000, then you’ll have to get this or the original! Comparable in terms of quality are Eventide’s H9 and TimeFactor, which offer greater flexibility, TC Electronic’s Flashback X4 and Alter Ego X4, and the digital delay models made by Strymon.

An excellent and characterful delay pedal that does so much more than recreate the original. The pro price is easily justified by the quality.