KRK aim at the market for top-quality monitoring with these heavyweight new contenders. 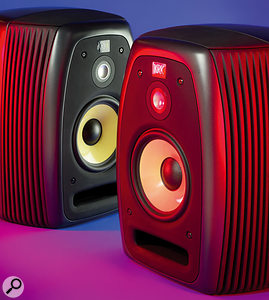 KRK are well-known for their Rokit and V series of monitors, which have proved popular in home and project studios. However, with the Exposé E8Bs, the company are clearly aiming at a rather more rarefied sector of the market, where the end user is more concerned with performance than with cost.

At over £3000 a pair, these active two-way speakers currently represent the very top of the KRK range. The design engineers have tried to build the most accurate studio monitor possible, by taking the existing physics of two-way ported speaker design and then paying extra attention to detail in the areas of tonal balance, distortion and dispersion.

Loudspeaker distortions can be caused by the design of the drivers, the way the cabinet is ported, or technical imperfections in the amplifiers driving them. By designing amplifiers with very low intermodulation and harmonic distortion, and by refining their cabinet and driver technology, KRK clearly think they've come up with something special. The curved cabinet shape reduces diffraction, which helps maintain good stereo imaging, as well as breaking up internal resonant modes, and the rounded shape is far stiffer than a rectangular box. The cabinet walls are also thicker than normal, being a minimum of one inch thick at any point, and because the shaping of the outside leads to the cabinet walls varying in thickness, the designers also reason that less resonance occurs within the panels themselves. Certainly this makes sense, and the boxes are extremely rigid, not to mention heavy. At the base of each cabinet is a non-slip, rubber-like material that isolates the speakers from their stands while keeping them physically secure, and magnetic shielding is provided so that the speakers can be used close to CRT monitors. Omnimount points are also built into the cabinets, which are very substantial affairs: though the cabinets may not look that large, at 19.3 x 14.6 x 14 inches (491 x 370 x 355mm), the weight of 75.6lbs or 34.31kg (each) is far from trivial!

Inside the cabinet is a two-way amplifier pack driven by an active crossover, with each amplifier rated at 120W (RMS). These are Class A/AB power amplifiers, so-called because at low signal levels the amplifiers operate in Class A, then when the power level exceeds around eight Watts, they move into Class AB operation, to improve efficiency and to prevent the build-up of heat. This strategy effectively removes the possibility of crossover distortion at lower output levels, where it is more likely to be audible. Heatsinks are integral with the rear of the cabinet, one built into each side and, as you might expect, there's protection against power surges, DC offsets due to amplifier failure and switch-on transients. 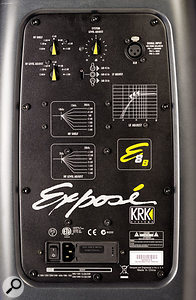 A comprehensive control set on the rear panel of the E8Bs allows adjustment of input level and high-frequency response. At the low end, the LF Adjust control can be used to change the monitors' bass response according to speaker placement.So the cabinets and amplifiers seem well thought out — but what of the drivers? A concave metal-dome tweeter handles the high end, but instead of the more usual titanium or pure aluminium diaphragm, this one uses an alloy of aluminium and beryllium known as AlBeMet. This combines lightness with exceptional stiffness, which allows high-frequency operation with less distortion, because the diaphragm is able to operate correctly as a simple piston over its operating frequency range. We're told that any resonances that do occur in the structure lie well above the human range of hearing. This diaphragm is driven by a large-diameter voice-coil, which, again, is light in weight.

The E8B's woofer cone takes a multi-layered approach, comprising two layers of KRK's now-familiar yellow Kevlar, which sandwiches a single layer of Rohacell hard foam. Rohacell is another extremely light material, providing additional stiffness and damping to the cone without significantly increasing its mass. Driving the voice coil is a powerful magnetic motor, which uses a copper pole cap and an aluminum shorting ring to maintain linearity. These motor techniques are by no means new but, applied properly, they can reduce distortions that would otherwise occur at high power levels, where the cone excursion is greatest. The overall frequency response of the system is quoted as 40Hz-30kHz +/-1dB, with a maximum SPL of 112dB (music) or 115dB (peak) at one metre.

All the necessary connectors and controls are on the rear panel. A System Level Adjust control regulates the level of the incoming audio over the range -30 dB to +6 dB, though the default setting of +6 dB is normally fine. HF response is adjustable via a Shelf switch, to increase or decrease the level of the frequencies above the shelving frequency, from -2dB to +1dB in seven half-decibel steps. There's also an HF level adjustment that changes the entire tweeter level, again in seven half-dB steps from -2dB to +1dB.

At the low end there's an LF Adjust control that allows the monitors to be used in different environments, specifically with regard to nearby boundaries such as walls, floors and ceilings. There are three switch positions, with the 'A' setting providing the greatest bass response. As a rule, placing the speakers closer to walls or corners requires you to choose a lower bass setting.

The audio input is on a balanced XLR, wired pin-2 hot, as is usual, and a Voltage Select switch provides 100V, 120V, 230V and 240V settings, which covers most international requirements — although, of course, the mains fuse value should be changed in accordance with the voltage selection, to provide the correct degree of protection.

If you'd like to audition alternatives to the Exposé E8B, you could look at models such as the ATC SCM20A, the ADAM S3A, the Klein & Hummel O300D, the PMC AML1 and the Dynaudio AIR series, or, on a tighter budget, something like the Dynaudio BM15A.

Aside from the physical challenge of lifting the speakers onto my monitor shelf, installation was easy, and KRK sensibly provide plastic driver protectors that can be removed from the front baffle after the heavy lifting has been done. I left all the tweaking controls in their flat position and the monitors seemed perfectly balanced in my studio, with a deep, powerful bass end that never seemed overbearing or out of control. While the overall tonal balance didn't seem radically different from the Mackie monitors I normally use, the low end was definitely cleaner, and fine detail, ambience and reverbs were revealed in greater clarity without the high end being harsh or overly forward. In audio terms, it was almost equivalent to putting on spectacles and finding everything sharper and better-defined, but without any of the colours having changed. The stereo imaging was also spot on, and sounds that had been processed to give the impression of surround from a two-speaker system really came alive. Best of all was that after I'd been using the speakers for a few minutes, I forgot all about them and just listened to the music!

I've used speakers before that allow you to 'look into' a mix, but most have been too toppy for my taste — something that I find makes monitors fatiguing to use. That's definitely not the case with the EB8s — they deliver exactly what I want to hear from a good studio monitor, and although they have the power to work in a fairly large studio they don't seem unduly upset at being used in smaller rooms. Great mixes sound great on the E8Bs, and bad mixes suck, which is just how it should be — you hear the music, not the monitors. Of course, all speakers, even the very best ones, can only deliver one interpretation of the truth, so some personal preference must come into the equation, but I'd be thrilled to be able to work with monitors of this calibre on a daily basis. These are not cheap but, given their performance, neither are they overpriced, and if you're in the market for monitors of this quality I'd strongly advise that you arrange to hear a pair of E8Bs before you make up your mind.

These monitors deserve to be taken very seriously. Up until now KRK have been associated with affordable and mid-priced speakers, but these put them in a different league altogether.

These monitors deserve to be taken very seriously. Up until now KRK have been associated with affordable and mid-priced speakers, but these put them in a different league altogether.