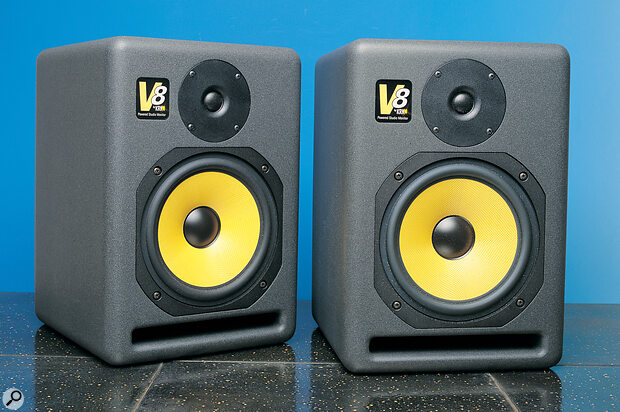 Paul White cranks up his laser gramophone and takes the new KRK V8s for a spin.

KRK have been in the studio monitor market for a number of years, but it's only recently that they've made a serious effort to address the mid/low‑price segment. This is precisely where their new, aggressively priced V8 monitors are aimed.

The KRK V8 is a two‑way, active nearfield monitor in a conventional ported cabinet with the electronic crossovers and power amps built into the back. There are many design benefits from 'going active', not least the ability to optimise the crossover design to compensate for bumps and dips in the frequency and phase response. Sonically, the bass end generally sounds more solid from a well‑designed active system. It's also usual to build in speaker protection and sub‑bass filtering — both of which are included here. 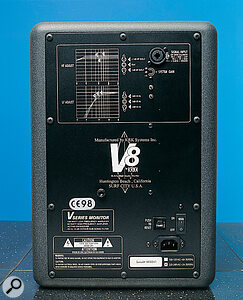 The V8s follow KRK's visually distinctive style — matt‑grey cabinets, rounded corners and yellow, woven Kevlar drivers. Power the monitors up (a switch on/off delay prevents thumping) and a small yellow arrowhead lights up on the V8 logo. Built from heavy MDF, the V8 cabinets have a slot‑shaped port at the bottom of the baffle. Each encloses 20 litres and measures a compact 11x16x12 inches. An eight‑inch bass/mid driver with a roll rubber surround crosses over to a soft‑domed, one‑inch tweeter at 1.66kHz — a somewhat lower frequency than on most systems of this size. The tweeter is driven by a 70W amplifier and the bass/mid by a 130W amplifier. Both drivers are magnetically shielded to make the V8s suitable for use in audio‑visual or computer monitor environments. Active speaker protection is included for both drivers with a reset button on the back of the cabinet. The sub‑bass filtering prevents excessive driver excursions at very low frequencies: here a 12dB/octave filter is used that's 3dB down at 31Hz.

Audio connection is via a Neutrik balanced combo connector that can accept either an XLR or a balanced/unbalanced jack. A gain trim is provided to adjust the input sensitivity to suit the output from a mixer or other signal source. To help compensate for room acoustics, there are two three‑way toggle switches to modify the frequency response of the system. The bass roll‑off can be set to 45Hz, 50Hz or 65Hz; the HF can be set to +/‑1dB, as well as flat. The overall frequency response is quoted as 47Hz to 23kHz, +/‑2dB.

Of course, what really counts is a speaker's performance. As it's important to have a reference when checking monitors, I evaluated the V8s against my passive ATC SCM20s which are pretty neutral (though having said that, it is difficult comparing active monitors with passive ones). As soon as I switched on, it was clear the KRKs had a much 'bigger' bass end than the ATCs, but while some active monitors seem to generate bass for its own sake, here it was very much under control — well‑extended, but not obviously exaggerated. The overall tonality is quite close to neutral, erring only marginally on the lively side. To really nit‑pick, the mid‑range also seemed just slightly thickened or 'chesty'. But considering their price, these are exceptionally good monitors that are a joy to use.

I've always had a lot of respect for KRK designs... their imaging is good, the sound is detailed without being abrasive, and, in the case of the V8s, the bass extension is so good that even those mixing dance music would probably find no need to switch to larger monitors.

The included information doesn't include a maximum SPL figure, but I had no problem in getting the V8s to go a lot louder than I would normally want to listen. Even with the 65Hz roll‑off setting, the bass is still deep, full and very physical. I guess tha t if you opt for one of the higher bass roll‑off settings, the overall headroom will increase further. In a typical small‑to‑medium project studio, you probably wouldn't want to use the deepest bass setting anyway, as it would almost certainly provoke room resonances.

I've always had a lot of respect for KRK designs because they provide a very workable solution to monitoring. Their imaging is good, the sound is detailed without being abrasive, and, in the case of the V8s, the bass extension is so good that even those mixing dance music would probably find no need to switch to larger monitors. Any deviations from absolute neutrality are so small that you would soon learn to work with them. In any case, there's no such thing as a perfect monitor, no matter how much money you have to throw at them. Fortunately, you don't need to throw that much money at the V8s, so if you're in the market for an active monitor in this price range, make sure you get to hear them.

Though this section of the market is also addressed by the likes of Mackie, Event, Harbeth, Dynaudio, Spirit and Quested, the V8s stand up very well and represent extremely good value.