The mid-priced studio monitor market is competitive. So what sets KRK's new offerings apart from the crowd? 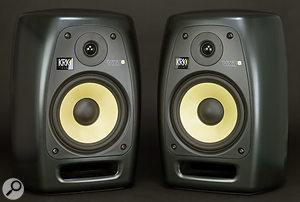 KRK's VXT series is pitched in direct competition with similarly sized and priced speakers from companies such as Mackie, Adam, M-Audio Genelec and Dynaudio. This range of two-way active monitors comprises three models: the VXT4 (which we reviewed back in SOS August 2007), the VXT6 and the VXT8. These two larger models have different tweeters and more sophisticated features than the smaller VXT4 and, other than their size, have much in common with each other.

KRK tell us to 'Imagine an NS10, with all of its mid-range accuracy, but with immense low-end extension and accurate, but non-fatiguing highs — that's the VXT8.' To me that sounds a bit like saying 'Imagine a Ford Fiesta but with the front half of a BMW and the rear end of a Porsche!' (Yes, I know that would give it two engines... don't bother to write in!) To be honest, I find it easier to assess these speakers by not thinking about the NS10 at all — because although the NS10 does have certain mid-range qualities, I can't really hear its influence in the end result here.

At first glance, the rounded enclosure shape is reminiscent of KRK's rather more expensive Exposé design, with its rigid format and flowing form that minimise mechanical resonances and internal reflections, and is also claimed to produce a wider listening sweet spot. Slotted cabinet tuning ports are employed to keep down port turbulence.

Unlike most other KRK models, which use MDF as a cabinet material, the elaborately shaped casework of the VXT8, which measures around 17 x 12.5 x 12 inches (43.8 x 31.8 x 30 cm) and weighs 41 pounds per speaker, is made from highly damped ABS structural foam with a black satin finish. A metal rear-panel houses the connectors and doubles as a heat sink. There's the familiar array of switches here for setting up the low end to suit the environment and making additional HF adjustments. These are located beneath a tamper-proof cover, but you're able to flip the switches using a small screwdriver poked through the side of the cover, without actually removing it, if you need to. Also integral to the cabinet design is a set of Omnimount fixing points.

Looking after the high frequencies for both models is a soft-domed (silk) tweeter, which works in tandem with a newly-designed bass driver featuring the familiar yellow woven-Kevlar cone that has become one of KRK's distinguishing features. This new driver was created to reduce mass while increasing stiffness, and it uses vented coil formers to help remove heat, thereby reducing the effects of power compression (loss of efficiency as the driver heats up).

The VXT8 has an eight-inch woofer and a one-inch tweeter, with the LF amplifier rated at 120W and the HF amp at 60W. A frequency response of 37Hz to 22kHz (+/-1.5dB) is specified, but the documentation omits details of the crossover frequencies or characteristics. Active low-pass and high-pass crossovers drive the power amplifiers, which feature subsonic filtering, to remove excessively low frequencies, and protection against AC power surges and overheating. Additionally there's a limiter (which, sensibly, you can bypass if you prefer not to use it, via the Clip Indicator/Limiter switch on the rear panel). As the limiter offers a useful degree of driver protection in case of excessive levels, this is best left engaged unless you can be sure you aren't pushing your monitors beyond their design limits. The input gain may be adjusted from -30dB to +6dB by means of a rear-panel trim pot, and a green LED shows how hard the limiter is working. With a maximum SPL of 111dB music and 114dB peak at one metre, you probably wouldn't want to be driving the speakers into limiting anyway. 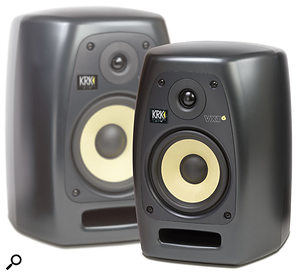 The smaller VXT6 is similar to the VXT8, in many respects, and provides a surprisingly natural bass end given the size of the woofer.To allow the HF end to be adjusted to taste, there's a three-position toggle switch that can be left flat or set to provide +1dB or -1dB shelving above 2kHz, while the LF can be set for whole-space, half-space or quarter-space operation (the LF switch brings in filters that affect the lower 3dB roll-off point with settings at 40Hz, 48Hz and 62Hz.) The panel legend suggests whole space as the default setting, but in a typical home studio where the monitors are likely to be used fairly close to the walls, the half-space setting might give a less exaggerated low end; it certainly did in my room.

The signal input can be on either a balanced XLR or quarter-inch TRS jack, courtesy of a Combo socket, and mains comes in on the usual IEC connector, with a rear-panel power switch. When powered up, the KRK logo on the front panel illuminates. To save power, an audio mute circuit is available to shut off the amplifier power supply if no signal is detected for over 20 minutes. This can be deactivated for situations where you're dealing with low-level sound, but is a practical energy saver. There's also a ground-lift switch in case of ground-loop hum.

Technically, the VXT6 is very similar to the VXT8, other than being smaller in size, with its six-inch woofer, and having predictably less bass extension (the frequency response is 49Hz to 22kHz) and a little less maximum SPL, at 108dB music or 111dB peak. It has all the same rear-panel features as the VXT8, but here the amplifier power is just half as much (30W for the tweeter and 60W for the bass/mid driver) and the LF filter frequencies are 52Hz, 60Hz and 75Hz. The cabinet size is around 14.5 x 10.5 x 10 inches, or 36.8 x 26.3 x 24.6cm, and it has a more manageable weight of 27 pounds. It employs the same tweeter as the VXT8 and also comes with Omnimount fixing points.

Once I had the VXT8s set up on my desk mounts (Primacoustic Recoil Stabilizers), I played some familiar test material and felt that the low end was just a touch overblown in the default full-space mode. I switched them to the half-space setting and found that the results were almost exactly right for my room and speaker placement. On the whole, I felt that these were very nicely balanced speakers, with plenty of detail and no squawky harshness or boomy bass. There's loads of bass extension but it all seems so effortless — there's no sense of hype, as is often the case from speakers where the cabinet has been highly tuned at around 80Hz to make kick drums sound more impressive. 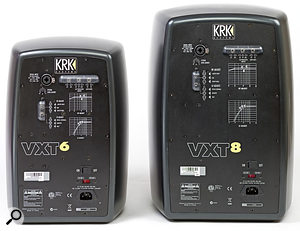 The rear of both models feature switches for HF and LF adjustment, along with a helpful chart to show the impact of any changes you make.Having mixed for a few minutes on the VXT8s, I very quickly stopped thinking about them, which is always a good sign. If you keep having to ask yourself how your monitors might be interpreting your mix, they may not be as accurate as their manufacturers claim. Because of the generous bass extension, adding a sub should be quite unnecessary in the typical project studio room, although of course you could do exactly that in a larger installation, or as part of a surround system.

Switching to the smaller VXT6s didn't bring quite so dramatic a change as I'd expected. The family sound of the speakers is extremely close, and this time I left the low end setting in its default whole-space mode. There's still enough low end here for a typical-sized project studio, and although the cabinet does sound a little more highly tuned, there's certainly no impression of 'one-note bass' or low-end congestion, so it would appear that the designers have got their sums right. The maximum SPL is only a few dBs less than for the VXT8s, and a very brief 'turn it up' test confirmed that the speakers sounded clean up to SPLs that were way louder than was comfortable to work with. Both models have a wide sweet spot, with good stereo imaging, and the bass end seems to stay reasonably consistent as you move around the listening area. Because of the close family sound that I mentioned earlier, it would also be possible to use VXT6s as rear surrounds in a system with VXT8s at the front.

When I first unpacked these speakers and read the info, I was a little worried that the synthetic enclosures might colour the sound in the way that some 'plastic' PA cabinets seem to, but it turned out that cabinet coloration was almost non-existent, at least on a subjective level. Sonically, these speakers tick all the right boxes for me, in that the bass end is believable, the mid-range clear and the top end nicely detailed without being harsh or splashy. I thoroughly enjoyed mixing on them, and they also offer really good value at the current price: just right for the project studio owner who wants something that will perform to a professional standard without costing a fortune. These are definitely monitors to put on your 'must try' list.

The market is quite competitive for mid-priced monitors such as these, and it's always a good idea to audition a few. Models for comparison include the M-Audio EX66s, the Mackie HR824 MkIIs and similarly priced models from manufacturers such as Adam and Dynaudio.

These are really good workhorse monitors, priced to appeal to the more discerning private studio owner who still has to count the pennies.