Version 8 sees another boatload of new processors added to the FL Studio family. And if that's still not enough, you can now create your own... 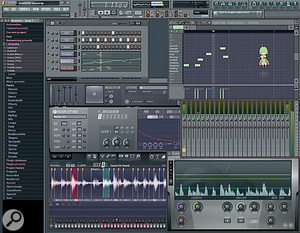 With significant updates released annually, Image Line's FL Studio has become a regular visitor to these pages over the last few years. It's now up to version 8, and benefits from a number of additions that have been made to an already rather long list of features.

To briefly recap, FL Studio provides easy–to–use pattern- and track–based MIDI sequencing, audio recording and editing, and support for instrument and effects plug–ins (a good number of which are included), for PCs running Windows 2000, XP and Vista, in both 32– and 64–bit flavours.

The program is available in several different versions, of increasing complexity. FL Studio Express provides a basic step sequencer only, and has many other features disabled. Fruity Edition adds a more flexible piano–roll editor and the ability to use FL Studio itself as a plug–in within other host applications. Producer Edition adds full audio recording and editing features, and mix automation, while the XXL Edition reviewed here adds extra plug–ins, and video support. (Note that none of these versions supports score editing.)

All versions are available to buy as downloads, and all but the Express version are available as boxed products. Unusually, Image Line offer "free updates for life" to anyone who buys FL Studio on–line, which seems like a pretty good deal. (Users of the boxed version can add the lifetime upgrade service for just $29, according to the Image Line web site.) The SOS web site has reviews of several previous FL Studio versions archived, while a comprehensive list of features and specifications is available from Image Line themselves at www.flstudio.com. Since space here is limited, I'll be concentrating on new additions made for version 8. So...

Numerous small improvements and refinements have been made to FL Studio since version 7. A detailed list of these is available on–line at www.flstudio.com/documents/history.html. Briefly, several new plug–ins have been added to the bundle, and some smaller enhancements have been made to the core program. Perhaps the most notable of the new plug–ins is FL Synthmaker, which is now part of the Producer and XXL Editions.

Synthmaker is a modular audio programming application, broadly comparable to SynthEdit or Reaktor, which has a life of its own outside of FL Studio and a home page at www.synthmaker.co.uk. A lengthy review of Synthmaker appeared in the April 2007 issue of SOS (www.soundonsound.com/sos/apr07/articles/synthmaker.htm), in which the software was praised for its flexibility and user–friendly interface. 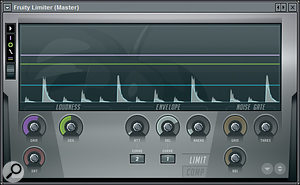 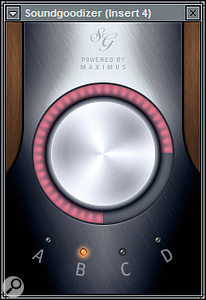 New dynamics tools: Fruity Limiter and Soundgoodizer.The version of Synthmaker provided with FL Studio 8 is very similar but not identical to the normal retail version. Probably the most significant difference is that the FL Studio version does not allow patches to be exported as VST plug–ins. This may not matter to dyed–in–the–wool FL Studio users, since Synthmaker patches can be accessed directly from within the program in the same way as any other effects or instruments.

Synthmaker provides a graphical environment in which low–level signal–processing 'primitives' can be combined to create 'modules', which can themselves be patched together to produce useful things like synthesizers and effects processors. The possibilities are, if not literally endless, really limited only by your ideas and your patience in implementing them.

Getting properly to grips with Synthmaker will require a fair commitment of time and effort. Extensive PDF documentation is available from the Synthmaker web site, and this would be the place to start, but of course you don't have to learn all about its inner workings to be able to make use of the software. Pre–built patches can be loaded and used just like any other plug–in, and these alone make Synthmaker a worthwhile addition to FL Studio. Bear in mind, though, that if you are interested in learning your way more thoroughly around Synthmaker, and if the idea of exporting VST plug–ins appeals to you, the Personal Edition of Synthmaker is available directly from Outsim for just £65 — less than the cost of the Producer or XXL editions of FL Studio.

Also new in the top two versions of FL Studio is Slicex, a loop–slicing instrument plug–in that detects transients in a loaded audio file and automatically chops it into segments, which are then assigned to MIDI notes for playback. Conceptually, it's very much like Izotope's Phatmatik Pro, which was reviewed in SOS September 2002 (www.soundonsound.com/sos/sep02/articles/phatmatik.asp).

Two different audio files can be loaded into a single instance of Slicex, and stored in 'decks' A and B. Each slice can have its playback shaped by an ADSR envelope generator, can be processed by a multi–mode resonant filter, and can have various modulators applied. Modulation targets include volume, pan, filter cutoff and resonance, and playback speed and start position. Modulation sources include an envelope generator, an LFO, note velocity, an integrated X/Y controller and a random number generator. Different slices (from either 'deck') can have the same MIDI note assigned, allowing sounds to be layered. Slicex also has a powerful integrated wave editor, which shares many features in common with the Edison editor available elsewhere in FL Studio.

Slicex has a range of possible applications. At its simplest, it's a tool that allows sampled loops to be sliced and re–triggered, so that their original phrases can be recreated at different tempos without any time–stretching artifacts. Once a file has been sliced, of course, its slices can be re–triggered in any order, so that the original material can be remixed and rearranged in any number of different permutations. Applying different effects to different slices allows for further departures from the original material, which can quickly be transformed and twisted beyond recognition.

While it might not be an original idea, Slicex provides a comprehensive set of tools and options for the job in hand, and its basic functionality is easy to get to grips with. Its more complex features allow for many hours of experimental tweaking. Some of its more advanced features are so complex, in fact, that you have to wonder how useful they will actually be to the average user. To cite the most extreme example, Slicex's wave editor (like Edison) can be automated with scripts written in the Pascal programming language. The manual explains that "a true Pascal compiler" is provided "that allows you to write code to perform complex DSP on your samples". Wonderful news if you're fluent in Pascal and the mathematics of digital signal processing, or if you have a tremendous amount of free time on your hands. 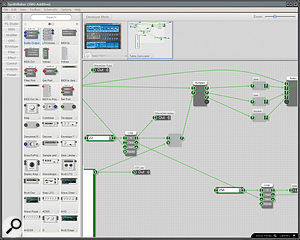 A version of Outsim's Synthmaker, a modular environment for the creation of complex effects, synths and processors, comes free with FL Studio 8.Fruity Limiter is a single–band compressor and limiter designed for use on both single tracks and whole mixes. The plug–in is configured with compressor and limiter stages in series. Clicking the Limit and Comp buttons switches the plug–in's interface between controls for each stage, which in each case are very similar. The Loudness section has Gain, Ceiling and Saturation controls (for the limiter) or Gain, Threshold, Ratio, Saturation and Knee controls (for the compressor). The Envelope section has controls for attack and release times, with different slope types available for each, and the limiter's look–ahead time can also be adjusted. The Noise Gate section has Gain, Threshold and Release controls.

Along the top of the window runs the analysis display, a rather shiny scrolling waveform graph that provides visual feedback to clarify exactly what effect the plug–in is having. You can view input and output peaks, and see the compression envelope superimposed along with the current Gain, Ceiling and Threshold levels. You can also adjust the speed of waveform scrolling, or pause it. 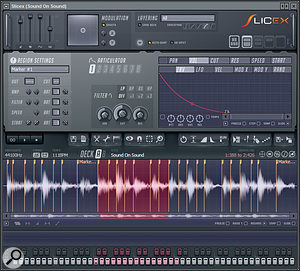 The new Slicex plug–in makes working with loops much easier.Fruity Limiter certainly allows for plenty of tweaking and fine–tuning. Fortunately, a fair selection of presets is included, which provide some useful starting points for different applications. Overall, the sounds are very good, with the Saturation control providing a pleasant warmth. At extreme settings the effect can be a bit overpowering, but it's easily tamed.

The Soundgoodizer plug–in appears to be partly a satire on the superstitions surrounding the processes of mastering, and partly a demo of Image Line's Maximus multi–band mastering processor, which is not included with any version of FL Studio but can be purchased separately. It's described as a stereo 'maximizer–enhancer' plug–in, and has a single large Amount knob for adjusting the effect's intensity. Four buttons are used to switch between four different settings, each providing its own variant of 'instant loudness'.

Another new addition, the Wave Candy plug–in, is described as a "flexible audio analysis and visualisation tool". It combines an oscilloscope, a spectrum analyser and a peak meter. Its user interface is very pretty, resizable and redraws very smoothly. It is, as its name suggests, an attractive shiny on–screen ornament, but may also have some practical applications.

Stranger, and less useful, is the Fruity Dance plug–in, described as an "anime generator". When opened, it displays a Japanese–style cartoon character, who dances on screen in time to the music. Different MIDI notes trigger different dance steps. Obviously. Its main purpose is presumably to make me feel old and confused, and it does that pretty effectively.

Although the new plug–ins are the main story in this update, a number of small improvements have been made to the core FL Studio program. A new feature called the Score Logger provides a three–minute buffer into which all incoming note data is written, regardless of whether recording is activated. The contents of the buffer can be dumped to a piano–roll editor window at any time, so that interesting phrases stumbled upon while warming up or improvising can be recalled and put to good use.

A 'multi–link controllers' function allows external MIDI controller assignments to be made and stored very easily: you simply tweak a number of on–screen controls, tweak the same number of hardware controls on an attached device, and the hardware assignments are made in the same order as the software controls were tweaked. A simple idea, but a good one.

I don't know whether the new features added for FL Studio 8 will be sufficiently compelling, on their own, to attract new users to the program, but they all add some extra value to what was already a pretty full package. To my mind, one of the most interesting parts of the bundle is Synthmaker, and I'm sure FL Studio fans will be delighted to have a closely integrated version provided within their favourite host application. Existing registered users of FL Studio who bought online will no doubt be delighted by their free–upgrade windfall, and Windows users who had previously considered buying or upgrading a version of FL Studio may now feel that they have extra incentives to do so.

A new collection of gadgets for the already gadget–laden FL Studio package. Perhaps not an essential upgrade, but one that should please the existing user base.