Conquering The Charts By Paul Tingen 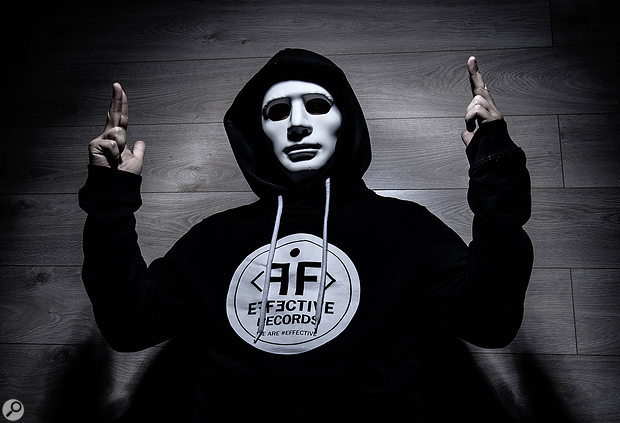 How did a teenager from Kazakhstan, armed only with an ageing laptop and a copy of FL Studio, conquer the charts?

One of the strangest and most unlikely hits of recent times has been 'Roses'. The song reached the top of the Shazam chart, and then, early in 2020, went to number one in several countries, including the UK. The hit version is unusual for several reasons, the most obvious being that it has a dramatically pitched‑up voice that makes it sound a little like a novelty hit. It also has an unusual background, because it was made by two completely unrelated artists.

The original version was released in 2016 by Guyanese-American rapper Saint Jhn, and enjoyed moderate success. The version that took the world by storm is a remix by 19-year old Imanbek, who is from the small town of Aksu, in the Pavlodar region of Kazakhstan. It's unusual for an artist from Central Asia to be at or near the top of the Shazam and other streaming charts, let alone the official charts of Western European countries. The track has also caused a lot of confusion, with the new version of the song continuing, in many cases, to be credited to Saint Jhn, despite the fact that Imanbek's version is dramatically different.

Credit Where It's Due

Saint Jhn's original of 'Roses' is dark, brooding, medium-tempo trap, with a bpm of 102, and a 'Happiness rating' on music metadata site Tunebat.com of 28 out of 100. It also has a pretty violent video. By contrast, Imanbek's version is an uptempo, sunny dance track, with a bpm of 122, and a Tunebat 'Happiness rating' of 90. In other words, they're almost entirely different tracks.

Yet in many cases Saint Jhn got the fame and glory, with journalists writing things like "Saint Jhn really has no limits when it comes to his artistry. Going on eight months straight, the record quickly secured his name in the dance music world." Meanwhile, the teenager who actually turned 'Roses' into a dance music hit often went unacknowledged.

This was even the case in the Official Charts in the UK, which lists Saint Jhn as the sole artist, and on its website carries glowing articles with headlines like, "Saint Jhn holds on to Number 1 for a second week with 'Roses'." A representative of the Official Charts explained that this is because the company "combines all versions of the parent track into one total figure and one chart position. So the Imanbek remix will be included in its current Number 1 total, and that remix is indeed the version that is currently mostly propelling the track's success in the UK, and is the version you'll hear played on radio."

With all this cleared up, over to Kazakhstan for Imanbek's perspective. The conversation takes place over Skype, and because Imanbek doesn't speak English, translation is provided by Kirill Lupinos of Effective Records, the first label to officially release Imanbek's version of 'Roses'. It turns out that the young man is in his fourth year of study at the Pavlodar Railway Institute of Engineering, and works as a signalman in the local railway station. He explains, however, that there's a musical streak running through his family. 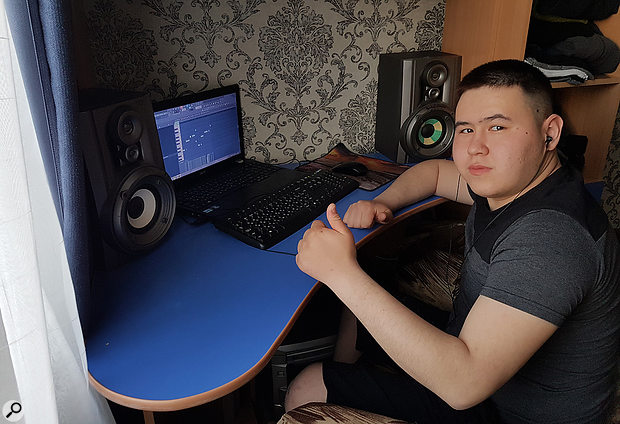 The man behind the mask: Imanbek at his humble home studio.

"My great granddad was a national artist of the USSR, and a big figure in Kazakhstan. My dad also is a big music fan, and a musician on an amateur level. He gave me a guitar when I was eight. So music was always in my family. Two and a half years ago I became interested in making music on a computer, and I started using FL Studio. I learned about making music on from YouTube videos, watching tutorials about side-chaining and how to use effects and so on."

At this point, Imanbek says, he was making music simply as a hobby, and often spent his time making "illegal" remixes of mostly locally-made tracks that he found online. One day in the spring of 2019 a track by Saint Jhn caught his attention on vk.com, the Russian equivalent of Facebook.

"I liked the track, and decided to do a remix version. It took me two hours. I started with the original track, loaded it in FL Studio, and edited it to get a certain structure. I then added a kick, and pitched it up by a semitone, then a tone, and pitched it up again, semitone by semitone. I was just experimenting. I then added a bass line, and clap and a hi-hat, a crash and a few other effects. I used a few effects, like [Cableguys] Kickstart and FL Studio's native EQ and reverb, but that was it. I added one plug–in for mastering, but want to keep secret what it was."

And so Imanbek's staggeringly simple, but effective, remix of Saint Jhn's 'Roses' was born, dramatically sped up and with the key raised from Cm to Fm. Even more staggering is the simplicity of the equipment Imanbek used, which consisted of a 10-year old Acer laptop with Windows 7, FL Studio 12, and nothing else. Unless one counts the laptop's internal soundcard, and a cheap pair of earbuds, Imanbek says he's not seriously considering upgrading his system, and when asked whether he therefore agrees that it's about the ideas and not the gear, simply responds with a simple "Yes." At this point during the interview, Lupinos offers to send him a good set of headphones to "celebrate" the interview. Imanbek smiles.

Rise To The Top

After he completed his remix, Imanbek uploaded it on vk.nl, and forgot about it. It was May 2019. Thousands of beatmakers around the planet will have found themselves in the same position as Imanbek: make a cool-sounding track and upload it to online oblivion, a couple of dozen likes from friends and family aside. So why and how did a remix of 'Roses', made by an obscure teenage signalman from Kazakhstan, rise to worldwide prominence?

"In the beginning, nothing really happened," recalls Imanbek. "There was no buzz around it. But then it organically started to grow, and in the Summer it exploded on YouTube. Why? Well, I think the main thing that drives the track is that it is unusual, and it's really positive, and the pitched-up voice is infectious and makes you want to dance. I think the popularity of the track is because it's a unique, genuine thing, and the pitched-up voice creates a vibe."

Imanbek: "I think the popularity of the track is because it's a unique, genuine thing, and the pitched-up voice creates a vibe.

The subsequent success of 'Roses' justifies Imanbek's faith that his remix is particularly cool, but its growth wasn't entirely viral. Once the track started happening online, it received another leg-up from Effective Records, and later on, additional promotion from several other companies. This next stage happened as a result of Kirill Lupinos noticing the online buzz around Imanbek's remix...

"I reached out to Imanbek in August and we decided to work together, and he signed to our label," explains Lupinos. "I then reached out to Saint Jhn and his manager, and we cleared the use of his song with him. On September 13th we released the track officially. Contrary to some reports, we never had any problems with Saint Jhn or his manager, and the song was released in partnership with the label he's signed to, Hitco. We then did quite a bit of promotion.

"Effective is the biggest label in Russia, and we specialise in radio hits, and we got the song on the radio in Eastern Europe, and it went to number one in Russia and every Eastern European country we have label deals with. We then teamed up with other partners in different territories around the world, like Wolfgang Boss of B1/Sony, and in the UK, Ministry of Sound. The song broke in nearly all countries, and we're going to release another Saint Jhn single mixed by Imanbek in May."

It's an impressive track record, and the song trending on TikTok also played a major part in its success. Lupinos has already hinted at what Imanbek is going to do next, and he's recently released an EDM track via KSHMR's Dharma label called 'Dope' (which uses a KSHMR vocal sample).

For the rest, Imanbek says, "I don't really have any specific plans at the moment, but I want to continue making music, and try many different musical directions, whether dubstep, or urban, or pop, or remixes. I see myself as multi-genre. I have many different projects in the pipeline, including collaborations with several famous artists."

No prizes for guessing Imanbek's happiness rating at the moment: 11 out of 10.