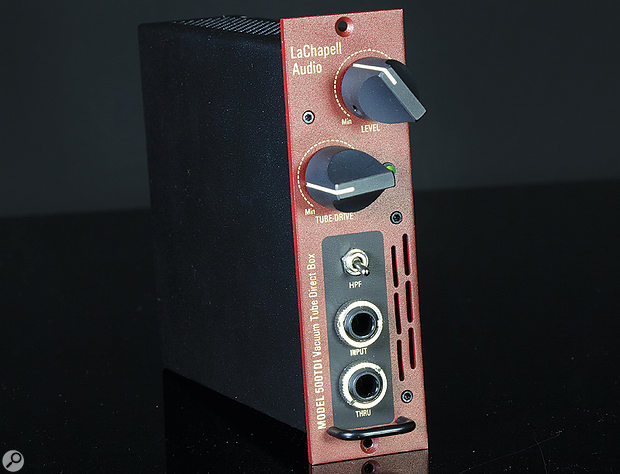 LaChapell Audio, who were acquired in mid-2017 by Digital Audio Labs (who are no strangers to the recording studio market), grew from a collaboration between founder and studio engineer Scott LaChapell and his late father, a former senior design engineer at the USA’s Lawrence Livermore National Laboratory. The company manufacture a small but highly regarded range of tube-based microphone preamplifiers and 500-series modules. LaChapell Audio’s experience with tubes has enabled the company to develop its proprietary TrueTube technology, that enables the tubes in its 500-series products to run at a B+ HT voltage of 250V, alongside a 12V heater voltage — a feat that isn’t easy to pull off given the constraints of the VPR Alliance’s current draw specification for this modular format.

In designing the 500TDI, LaChapell Audio have utilised the somewhat obscure 12DW7 tube. Unlike other twin triode tubes that are made up of a pair of identical triodes inside the same glass envelope, the 12DW7 contains a pair of dissimilar triodes (a 12AX7/ECC83 and a 12AU7/ECC82-type triode, hence its alternative ECC832 designation). I’ve not come across any other current instrument amplifiers that feature this tube, though it does crop up occasionally as an after-market substitute for a 12AX7 as a way of tailoring gain in a circuit.

The 500TDI’s front panel is a class act. Its dark colouring, with yellow legends on a maroon background, is offset by the black of the control knobs and the island area that carries the High Pass Filter switch and the quarter-inch jacks of the high-impedance Input and Thru output. Once installed in a 500-series chassis, a green LED lets you know that power is present and that the 250V HT supply is up and running. Internal construction is exemplary. All components are discrete and of very high quality, with the unit’s most prominent internal features being an Emco voltage converter, a Cinemag output transformer and a vertically oriented Electro-Harmonix 12DW7.

Given its relatively low component count, the 500TDI’s signal path is inherently not that complex. From the input, the signal passes through a FET-based unity-gain buffer that sits in the circuit in the position where you’d normally find the first triode stage in a tube amp. The FET drives the 12DW7 tube’s 12AX7 triode via the Level control, and the signal then passes via the unit’s HPF and Tube Drive to the second 12AU7 triode, which in turn drives the Cinemag CMOQ-2L line output transformer.

The LaChapell 500TDI couldn’t be simpler to operate if it tried. The Input jack has a nominal input impedance of 1.5MΩ and is designed primarily for instruments with active electronics. The thru jack doubles as a lower-impedance input for passive instruments and may also offer active instruments a different tonality. Once you’ve plugged the 500TDI into a mixer channel, mic preamp, or audio interface, and you’ve finished marvelling at the complete lack of background noise, its operation is entirely intuitive as you balance the volume control of your guitar, bass or keyboard, the Level of the signal driving the first tube stage and the amount of Tube Drive into the second stage. Interestingly, the action of the HPF is unusual in that its -3dB point varies with the position of the Level control, from 90Hz at minimum to 65Hz at maximum, thus providing another subtle gain-related sound-shaping option.

With active instrument electronics or a preamp in the external signal chain driving it, you can drive the 500TDI into a most musical distortion that can insert a satisfyingly crunchy edge into your louder notes — an effect that, to my ears, is particularly effective on bass guitar. If you think of the Level control as being a guitar or bass amp’s channel gain and the Tube Drive as its master volume then you’ll find that you can persuade the 500TDI to deliver a wide range of sounds, from clean gain with high headroom with Tube Drive at 9 o’clock and Level at 3 o’clock, through the added harmonics and compression that appear as you reverse those settings, to the sound of tube-based distortion that you’ll get with the Tube Drive maxed out and the Level pushed up — provided that you hit the input with enough signal from your instrument and any external preamps or pedals.

To me, the attraction of the 500TDI lies in both the silence that underpins its superb sonic performance, and in the subtle and precise control that it offers over harmonic content, tube compression and distortion as you balance your instrument’s output with the unit’s Level and Tube Drive controls. Vintage tube mavens like me are going to have loads of fun swapping the stock valve for old NOS equivalents in order to squeeze the last drops of performance out of the 500TDI.

The unit’s only negative issue is its price, but, from where I’m standing, the sonic gain far outweighs the financial pain. If you’ve got a 500-series rack, you really do need to audition the LaChapell Audio 500TDI. Me? I’m already saving up for mine.