Offering everything from pristine cleanliness to tube-driven colour, this preamp can hold its head high in the company of more expensive designs.

Launched in April 2006, LaChapell Audio's Model 992 was a high-end, hand-assembled, transformer-balanced, dual-mono, multi-tube microphone and instrument preamplifier — the first in a product family that has continued to evolve ever since. Evolution started quickly and, by November 2006, the 992 had morphed into the (still current) 992 EG (Extended Gain). In addition, the 992's circuitry had inspired the 583S, a double-slot, single–tube, single-ended 500-series version of the 992 with a solid-state output stage. 2014 saw the arrival of the 983S, a dual–mono, 1U rackmount incarnation of the 583S, and the latter slimmed down to become the single-slot 583S MK2, which featured a Cinemag input transformer and Jensen output transformer instead of the 983S's all-Jensen setup. The latest additions to the 992's family tree are the all-new, updated 983S MK2 and, reviewed here, its mono, half-rack width sibling: the 983M Vacuum Tube Preamp, to give it its full title.

Cosmetically, the 983M is instantly recognisable as a LaChapell Audio product courtesy of its matte–burgundy faceplate and twin matte–silver knobs. A black-finished area highlights a four-segment VU meter, the front-panel high–impedance (instrument) input and the unit's six function switches, each with an individual LED indicator. Finally, an illuminated power switch controls the input from the external universal voltage ±24V DC power supply, which enters the 983M via a rear-mounted locking 4-pin XLR connector. Balanced XLR connectors on the other end of the rear panel provide the microphone-level input and line-level output. Should you wish to mount two 983Ms in a rack, an optional rack kit is available at extra cost

Although the quality of the fit and finish of the 983M's enclosure is exemplary, its internal circuitry probably even surpasses that level of workmanship. The power supply board (fed from the external PSU) is beautifully laid-out and is walled off from the rest of the unit to eliminate interference. The layout on the audio board (which also carries the input and output transformers and the single 12AX7 tube) is similarly superb and, as with the power supply board, is populated by a mixture of both full-size and surface-mount components.

In addition to the expected -20dB pad, 48V phantom power and polarity reverse two-way switches, you'll also find two three-position, centre-off switches that control the high-pass (50 and 150 Hz) and low-pass (5 and 10 kHz) filters, whose relatively gentle slopes will help remove unwanted low and high frequencies. The final switch mutes the output of the 983M (something I personally I find more immediate and much more convenient compared with using a mouse and a computer screen when recording to a DAW).

The lower left silver knob, called Tube Drive, controls the level of the post-transformer input signal being sent to the vacuum tube. Higher levels drive the tube harder, resulting in more harmonic distortion (tube saturation) in its output. Connecting a quarter-inch jack to the front panel Hi-Z input bypasses the input transformer, and routes that input directly to the Tube Drive. 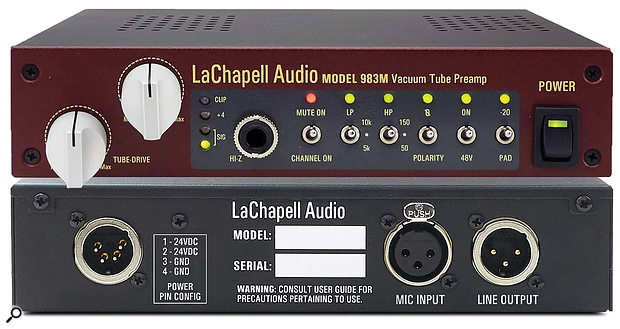 By carefully balancing the two silver knobs' settings you can achieve different degrees of tube distortion for the same output level.

The upper right knob, labelled Level, sets the level being fed into the Jensen JT-11-DM output transformer. Since that transformer produces less than 0.001 percent total harmonic distortion (THD, at 1kHz, +4dBu input), this Level control is the 983M's source of clean gain.

The VU meter is somewhat unusual in that the bottom two green LEDs (the first of which is set to illuminate as low as -50dBu) show only the level of the input signal. Once the second LED illuminates, the effect of increasing the Tube Drive has to be monitored entirely aurally as the third (amber) LED isn't triggered until the 983M's output level (set by the Level control) reaches +4dBu. Above that, no other metering is available until the fourth (red) LED springs into action at +23dBu — a level that should prove more than sufficient for the needs of any following piece of audio hardware.

The 983M is all about harnessing and manipulating its inherent potential for tube-based harmonic distortion.

In operation, the 983M is a superbly practical device, whose front-panel layout allows you to check its operational status with a quick glance. Adding to its real-world operating capability, LaChapell have equipped the 983M with their new trademarked 'True48' dynamic phantom power supply design, which is intended to maintain a constant 48V despite any change in load — for example, during sustained periods of high–level transients. An increase in the load on a conventional phantom power supply, the extent of which is dependent on the demands of the connected condenser microphone or other device requiring power, can cause voltage dips below 48V. By eliminating such dips, LaChapell's True48 design can give phantom-powered devices greater headroom and faster transient recovery.

As with all LaChapell products I've encountered to date, getting the best from the 983M is all about harnessing and manipulating its inherent potential for tube-based harmonic distortion. This is easily and intuitively achieved by exploiting the interactive relationship between its Tube Drive and Level controls — this allows you to move your sound anywhere from pristine cleanliness to deep distortion at any output volume level up to +23dBu.

The 983M's -20dB pad adds even more versatility since, as in all LaChapell's mic preamps, it essentially acts to eliminate the gain contributed by the unit's CineMag CMM1-10PCA input transformer. Although designed to provide the attenuation required for higher-level sources, when engaged on microphone-level signals this pad allows you to effectively trade transformer gain for vacuum tube gain, which will result in a different saturation/distortion profile as drive to the tube increases.

For example, with a -30dB input, setting the Tube Drive at 10 o'clock and the Level at 12 o'clock produces an output level of +4dBu. Engaging the -20dB pad means that the Tube Drive has to be set to 3 o'clock in order to get back to +4dBu, with the increased level being driven into the tube producing a significant increase in the level of distortion in the output. Since the audible result of this technique depends entirely upon the tube being driven, this also opens up the option of experimenting with different brands of 12AX7 tubes.

The audio results delivered by the 983M are extremely impressive — and, in my opinion, they certainly justify the preamp's premium price tag. The low noise floor, superb transient response, wide bandwidth (9Hz to 40kHz) and up to 72.5dB of microphone gain give the 983M a transparency that allows you to appreciate and exploit the nuances of the source, your microphone and its positioning, and then to add tube saturation to your heart's content. LaChapell Audio's 983M is a mic/instrument preamp that really needs to be heard to be appreciated, but I really liked it — and, if you're into adding tube coloration to your sources, you really should have a listen too.

The 983M sits in a sparsely populated price bracket, in which its closest equivalent is probably the Universal Audio Solo 610. Slightly higher in price are the Black Box Analog Design MM-1 and the SPL Gainstation 1. To find other alternatives, you'll probably have to move up still higher in price to achieve comparable performance.

A great-sounding tube-based microphone/instrument preamp that can be transparent and clean when required, and that can be quickly and intuitively persuaded to deliver levels of harmonic distortion that can range from the sublime to the ridiculous.