If you're looking for mics that'll handle almost any recording task without breaking the bank, Lewitt's newest offerings could be just the thing.

Sometimes you need a mic with a flat response, but at other times a boost in the high end can be helpful — and Lewitt's LCT 140 Air is designed to cater for both situations. With a fixed cardioid polar pattern, the mic employs a back-electret capsule that is 17mm in diameter. Though back-electret mics don't require a separate supply to charge the capsule, both the LCT 140 Air and the LCT 040 Match, also reviewed here, still require 48V (±4V) phantom power to drive the on-board electronics. 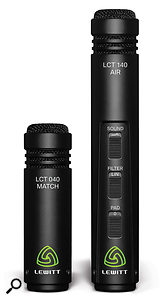 The LCT 140 Air has a number of selectable responses, chosen using three recessed slide switches on the side of the body. The one nearest the capsule changes the mic's voicing from flat to 'Air' mode, which brings in a presence lift around 10kHz. The other two switches are more familiar: one introduces an 80Hz, second–order low-cut filter, the other a 12dB pad.

The mic is very nicely constructed, with a lightweight aluminium body and a tough wire–mesh grille (both finished in satin black), and a prominent green Lewitt logo near the base of the body. Overall length is 140mm, the diameter is 24mm and the weight is just 66g. The output is on gold-plated XLR pins. Though there's no hard case provided, you do get a stand adaptor, a foam windshield and a vinyl storage pouch. All this comes in a foam-lined cardboard box that should last a good while if looked after.

By way of specifications, the mic has a sensitivity of 14.6mV/Pa and a noise figure of 20dB A–weighted. The maximum SPL (above which the distortion exceeds 0.5 percent) is 135dB, so there's no reason not to use this mic over a drum kit. Suggested uses include strings, acoustic guitar and choral groups, but in reality it should be able to handle almost any instrument you're likely to come across in a typical recording session. Oddly, the spec sheet doesn't include frequency-response figures or a response graph, though I'm pretty sure this mic has nothing to hide.

If you need an affordable pair of tell-it-like-it-is mics that are useful in a number of applications, these certainly deserve a look.

Recommended for drum and acoustic guitar recording, the LCT 040 Match kit we received comprises a matched stereo pair of microphones with stand clips, foam windshields and a vinyl storage pouch, all packaged in a foam-lined cardboard box (the mics are also available singly). Finished in a similar way to the LCT 140 Air, and also featuring a cardioid–pattern back-electret 17mm capsule, the LCT 040 has a very similar technical specs to its sister mic, other than a slightly higher sensitivity of 18.8mV/Pa, and it dispenses with the pad, voicing and filter switches. The lack of switches means the 040's body is considerably shorter at just 83mm long, making it easier to set up in awkward places. The brief instructions for both mics are very non-technical and seem to be aimed at the recording musician, with some useful tips on recording included. The price is musician-friendly too, especially for the LCT 040 Match, but how do these mics stand up in more serious studio applications?

Taking the LCT 040 Match first, a test on acoustic guitar confirmed that the mic delivers pretty much what you hear without any apparent coloration or added character, suggesting that the response is nominally flat. With my test guitar, which isn't the brightest-sounding instrument, I needed to EQ out the low mids a little to reduce boxiness, and also to add some shelving lift above 5kHz to give me a bit more zing. The sound from the mic took EQ well and it didn't take long to get results that I was happy with. Similarly, tests on percussion and tuned percussion again attested to the 'no-frills' nature of the microphone's sound, and when two were put up as a stereo pair, the matching appeared to be close and the stereo image stable. So, if you need an affordable pair of tell-it-like-it-is mics that are useful in a number of applications, these certainly deserve a look.

Switching to the LCT 140 Air, first set to its flat position, the results from all the above sound sources sounded similar to what I was hearing from the LCT 040 Match, which is rather what I expected from the spec sheet. Bringing in the high-lift voicing added a useful high–frequency zing to the guitar sound but not in an excessive or over-obvious way, and it seemed to be acting far enough up the spectrum that it didn't add any harshness. This time I needed very little EQ to get an acceptable sound, and most of what was needed was used to address shortcomings in the guitar/room combination rather than those of the microphone.

During a Session Notes project (which you can read about in this issue), I had to record a cello that would form part of a small string section, albeit recorded separately. The Lewitt 140 Air gave me just what I needed with its EQ slide switch set to flat, and with no real need for further EQ in the mix. I tried a few mic positions, some of which gave me plenty of articulation but insufficient weight and others that emphasised the body resonances too much. In the end I settled for aiming the mic towards the bridge from around 350mm away, and ended up with a good balance of weight and detail with a tonal balance that came very close to how we actually heard the instrument acoustically.

Both mics did a great job on my home–made three-string cigar–box resonator slide guitar (don't ask!), but the Air setting on the LCT 140 again opened up the sound in a very seductive way, seemingly adding more space around the sound as well as giving the detail a subtle lift. Using shelving EQ lift it was possible to get the LCT 040 Match to sound somewhat similar, but I couldn't get exactly the same effect. In a direct comparison the LCT 140 Air's voicing always added a sense of air and space that EQ'ing the 040 didn't quite capture.

While the LCT 040 Match mics don't offer anything novel or unusual, they are well-built, versatile studio mics at an affordable price. The LCT 140 Air has the advantage of pad, filter and voicing switches, and though it costs more than the LCT 040 Match, it is still very affordable given its performance.

At the affordable end of the small–diaphragm mic market, there are options from most of the obvious names including Rode, sE, MXL, Samson, Sontronics and Audio–Technica to name but a few. Rode's M5s are probably the most direct competitor to the LCT 040 Match in terms of application and price.

These are well-engineered microphones from a reputable company, and offered at a price that should be very appealing to home- and project-studio operators.