There are plenty of reasons to feed MIDI data into your Eurorack, whether it’s matching grooves with a drum machine or noodling with a favourite keyboard. The latest MIDI to CV interface comes from a company I hadn’t encountered before, Liivatera. Their Mono-MIDI module offers the traditional CV and Gate outputs, plus three (fixed) assignments: velocity, aftertouch and mod wheel, all dispensed at 0-5V. The main CV output incorporates pitch-bend, its range ± two semitones. None of its jack connections grip very firmly, which doesn’t immediately inspire confidence. 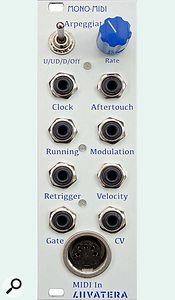 Size: 8HP. Current: +12V = 65mA, -12V = 60mA, +5V 1mA.Unusually, a basic arpeggiator is present too, sporting three directions and a 32-note buffer to ensure that notes aren’t lost, even if you’re a mutant jazz fiend partial to flaunty chords. When the arpeggiator isn’t being used, its Rate knob selects the available time divisions for the MIDI clock output. On opening the box, my first impressions were of some slightly awkward design decisions causing me to pause and check through the manual before fitting. Operation depends on a couple of jumper blocks and a 16-way switch for MIDI channel selection, none of which are accessible once the module is fitted into a rack case. A large four-way jumper determines whether the unit operates in low- or high-note priority, if MIDI Omni mode is active (ie. data from all channels is accepted), plus whether the channel should be set by the rotary switch or plucked from the first note received on power-up. A simple MIDI learn button would have been so much easier for that! The jumper block also sets Poly mode on or off, with the former responsible for activating the note buffer. In the latter mode, the module only cares about the last note received.

The next decision before the module goes in involves your legato mode preferences for the generated gates. Enable legato and new gates are not generated if there’s at least one note already held, as you’d expect. However, I later discovered that this affects the arpeggiator too. Therefore, as soon as you hold down a chord for arpeggiation, the CVs are generated but no gates.

If you’re lucky enough to have an envelope module such as Doepfer’s Quad EG, this won’t be an inconvenience — you simply make use of the Mono-MIDI’s Retrigger jack. All notes are triggered at this output, regardless of legato settings, however not too many envelopes match the Doepfer in this respect. You could, though, use the retrigger output as an alternative to gate whenever the urge to arpeggiate arises. Actually, this might not be a huge issue because the arpeggiator is extremely simple and perhaps not a vital part of the Mono-MIDI experience anyway. It offers only up, down and up/down motion and a range of speeds. Should you feel it’s not necessary, leaving the switch in its down position at startup leaves it inactive.

Finally, MIDI clock is dispensed at a selection of clock divisions (1, 2, 4, 6, 8, 12) obtained from the Arpeggiator Rate knob. In parallel there’s a Running status voltage produced: it goes high (5V) when a MIDI start or continue is detected and low upon stop. That’s darn handy for giving your Eurorack sequencers the full remote control treatment.

The Mono-MIDI is a reasonable size and is neat and functional, even if it lacks some of the frills and assignability of its competitors. If you feel a spot of arpeggiation might brighten up your MIDI-CV world, it’s worth a look.