Eurorack has steadily expanded into so many areas of functionality that it’s sometimes possible to overlook or underestimate modules that were once judged essential building blocks. I’m afraid I was guilty of this when a VCO from Liivatera arrived: I slipped it into my system, expecting the usual stuff. Fortunately, a few days later I remembered it was in there and took a proper look. 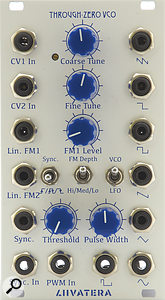 Size: 14HP. Current: +12V = 65mA, -12V = 60mA.The TZ-VCO is 100 percent analogue, and unusual in several respects. First and foremost, the TZ stands for ‘through zero’, meaning that it is intended for linear FM, which is not easy to achieve in the analogue realm. Secondly, it has a rather interesting sync implementation complete with a variable threshold control. With no fewer than seven waveform outputs and a switch to slow it down to LFO rates, there’s clearly more to this blue-knobbed beauty than a cursory glance might suggest.

The module sports a pair of regular pitch inputs (exponential) and two FM inputs (linear), one of which has an attenuator. There’s also a three-way switch governing FM depth, and with this you can flip from gentle vibrato to — at the maximum — glistening and sparkly FM tones. Adjusting FM depth provides hands-on tonal changes and a range of harmonically rich sounds beyond the scope of most analogue VCOs.

The TZ’s top end is particularly good. It tracks way past the limits of my hearing and the through-zero behaviour, reversing phase as the oscillator slows to a stop, is vital to ensure modulation relationships are maintained even at low transposition. When you’re not exploring the delights of analogue FM, the multiple waveform outputs deliver three square waves (a straight square, a variable square and a sub oscillator), plus sine, triangle and two sawtooths, one of which is pitched an octave above the rest. The variable-pulse waveform becomes super-thin at the knob’s two extremes but will only disappear on application of external CV to the pulse width. Naturally enough, in LFO mode it’s a great bonus to have all these waveforms available at once.

Liivatera have also prepared a treat for sync lovers. A three-way switch sets sync behaviour so that it operates either on the rising, rising and falling, or falling edges of an incoming signal. The oscillator is based on a triangle core and its sync is designed to reverse rather than hard reset. With the switch in the middle position, cross-mod or ring modulator-type sounds can be generated — often harsh, metallic or gritty.

The Threshold control is used to fine-tune the level at which sync takes place and, given there’s also a CV input for this, you can perform cool tricks such allowing an LFO to gradually transition between sync’ed and non-sync’ed behaviour. Having a variable threshold also means that pretty much any source waveform can yield worthwhile results, while the option to choose the rising or falling edge can lead to tonal changes ranging from subtle to surprising, depending on the source.

This oscillator design has already featured in the 5u modules available from www.krisp1.com and perhaps my only criticism of the smaller format is that it can feel quite crowded and the switches difficult to reach. Admittedly, my tests tended to involve most of the waveform outputs and multiple modulation connections, but when you have the option to combine FM and sync, it’s hard not to indulge. I think it was a great decision to include two FM inputs and, if space were no object, I’d have loved a second attenuator too — and octave switches (they’re so often neglected in the world of Eurorack). However, that’s probably being greedy because this is a fun and powerful VCO with many sonic flavours and applications.