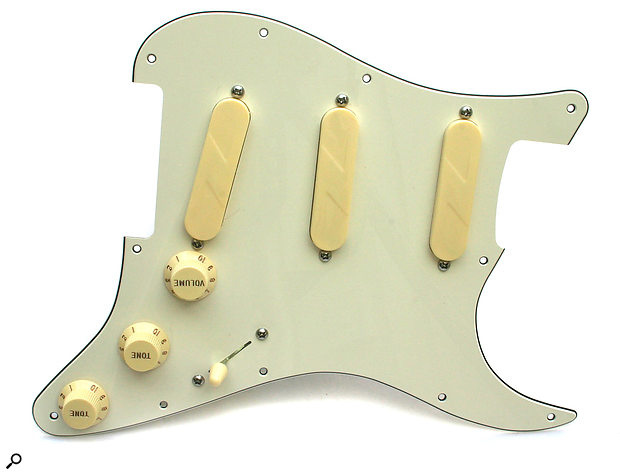 Lawing Musical Products have been building their own take on noiseless replacement pickups for Stratocasters for some years now, assembling their Z-Series and Legacy Series pickups in their own custom shop based in Newark, US. Most noiseless Strat pickups use either a stacked coil or two narrow blade pickups side by side, which might tackle the noise but can be difficult to voice in a way that matches the single-coil pickups they replace. That’s not to say it’s impossible — Australian company Kinman make a range of stacked-coil noiseless replacement pickups which sound very authentic, but they use some pretty complex assembly methods.

Scott Lawing decided to go about solving the problem in a different way. Instead of stacking the coils, he used a separate coil for each string, each one surrounding a flattened pole-piece. The coils and magnet polarities are arranged in a three-plus-three, series-wired arrangement, to work as a humbucker. The six coil assemblies are angled and arranged side by side in a way that doesn’t cause level- or tonal-change problems when strings are bent into the zone between the G and D strings, providing the pickups aren’t set too far away from the strings. For the hotter pickups in the range, there’s the option to wire the two sets of coils in parallel, for a brighter output.

The reasoning behind this design approach is very deep and it’s most definitely not a case of smoke and mirrors — Scott Lawing sent me a copy of his technical notes, which target the real reasons that pickups sound the way they do, with a great deal of importance being attached to the way eddy currents are controlled in the pole-pieces. Rather than use a bar magnet as a pole piece, as in a typical Fender pickup, each metal pole piece sits on top of its own magnet.

Recently Lawing Musical Products added the Zexcoil Z-Core range, which is offered at a lower price than their previous custom-shop ranges. This is made possible by manufacturing in the same US factory that winds all their coils, and they say more models will be added to this more affordable line when practical. We’re told that the aim is to deliver a classic AlNiCo 5 tone, while offering a range of output levels. The pickups are offered as a set, either on their own or already wired, with the controls mounted on a cardboard plate, ready to transfer to your own pick-guard. (The quality of the pots, switch and capacitor is first-rate.) As the pickups are understandably quite expensive to manufacture, the company currently sell direct to keep the end-user cost down, but they will ship worldwide. Note that left-handed Z-Core pickups are currently only available from the Custom Shop, and orders may take up to three weeks to process.

The voicing of the pickups is clearly vital and, according to Scott, that has much to do with the electromagnetic properties of the pole piece around which the coil is wound. Once this has been established, different output versions can be created using the same pole-piece design by changing the number of turns of wire wrapped around it and by changing the strength of the magnet. Scott describes this as their Tone Tuning Technology, and he’s made a lot of detailed measurements to ensure his pickups behave the way he wants them to in terms of their resonant frequency and Q.

The Z-Core range covers five voicing options, comprising Vintage Underwound, Vintage, Vintage Hot, Modern and Overwound. Cosmetically, the pickups don’t emulate traditional Strat pickups as the pole pieces are hidden completely behind a cream plastic cover (which may offend purists but not me: they look really neat). They weigh a little more than standard pickups, and seem to be a few mm deeper, but they fit a standard body with no need for modification.

I was sent a pre-wired pickguard to review, and it took me only a few minutes to swap out my existing pickguard (fitted with a Fender Tex Mex pickup set) for the Z-Core Vintage set. As delivered, the Z-Core pickups were rather a long way from the strings but it was easy enough to raise them until the output level was close enough to what I was getting from my Fender pickups. Checking with the manufacturers confirmed that the Z-Core Vintage pickups work best when set fairly close to the strings (between 2.381 and 3.175 mm) and, unlike some single-coil pickups, you can get them very close without creating atonal overtones.

A quick tune-up and I was ready to check out the clean sounds, which I found to be bright with plenty of Fender-like snap to the note attack. (Of course, Tex Mex pickups are not vintage voiced, so I couldn’t expect an exact tonal match.) My first impression was that the sound was in some way a little more hard-edged than I was used to, rather like the sound you get when switching from nickel-wound to pure steel-wound strings. I discovered that this was due mainly to the slightly non-standard way the pick-guard assembly is wired. The bridge pickup has a dedicated tone knob, while the middle tone knob is wired to both neck and middle and has a no-load position when fully open, so that the output isn’t loaded by two sets of tone controls in the bridge-plus-middle position. Backing it off by a small amount brings in the pot resistance and tames the highs. The pots are the standard 250kΩ used with conventional pickups, and there’s no treble bleed wiring around the volume control.

There were no noticeable level or tonal changes when bending the G string high up on the neck and the ‘in between’ pickup combinations sounded as they should with just the right degree of ‘Strat-ish’ hollowness. Patching in a high-gain overdrive pedal revealed just how effective these pickups are at rejecting hum. Even standing close to the amp there was no noticeable hum — just a bit of circuit noise from the pedal itself. Overall then the pickups do just what they should — they recreate an authentically bright, single-coil sound without the single-soil’s inherent hum susceptibility. They’re definitely up there with the best of the noiseless options; it’s clear that a lot of thought and research has gone into the design.

While the cost of Lawing’s custom-shop pickups might make you think twice about switching, these Z-Core pickups compete on price with single-coils — while delivering the same benefits as their custom-shop cousins. Tonally, they give you the bright, open sound you’d expect of a single-coil pickup, their hum rejection is impressive and there’s a good menu of voicings from which to choose. All of which makes them a very practical proposition for recording, or when playing in venues where electrical interference manifests itself as a hum problem.

$225 per set of three Z-Core pickups. Wired sets with controls and switch from $320.

$225 per set of three Z-Core pickups. Wired sets with controls and switch from $320.