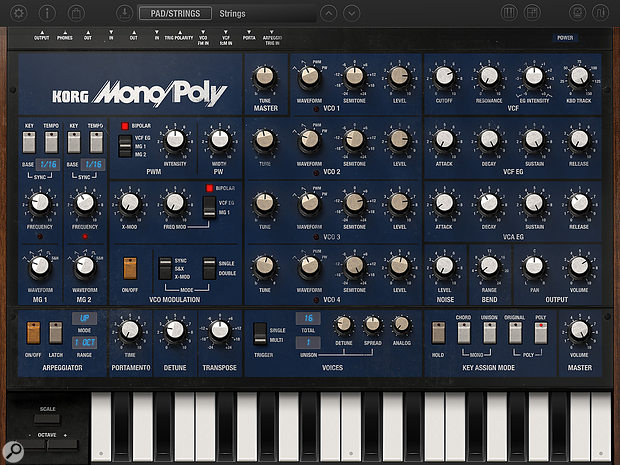 In 2004, Korg embraced their analogue heritage by releasing MS20 and Polysix soft synths in their first Legacy Collection. In 2007, these were joined by the Mono/Poly to form the AE (Analogue Edition) and, with soft versions of the M1 and Wavestation as well as hardware recreations of the MS20 among their current offerings, the company remain unembarrassed when it comes to mining their considerable legacy. Their latest soft synth is an iOS version of the Mono/Poly, which appears to be so similar to previous versions that it can swap patches with them. Of course, its voicing isn’t limited to that of the original synth, and what we have here is a truly polyphonic soft synth based upon the four-oscillators-per-note architecture of the Mono/Poly, but with additional voicing modes, velocity and aftertouch sensitivity, synchronisation of the LFOs and arpeggiator (which offers a random mode that the original lacked), plus vastly expanded modulation capabilities courtesy of an eight-slot modulation matrix.

In addition to the basic synthesizer voicing, the effects that Korg designed for their Legacy synths are also recreated here. The 18 algorithms — comprising dynamics, EQ, modulation effects (including an approximation of the wonderful Polysix ensemble), an exciter, a decimator, delays and reverbs — are well specified and offer a degree of flexibility that you might expect from dedicated plug-ins. Consequently, the results of inserting appropriate effects into the iMono/Poly’s two slots and programming them sympathetically can be stunning. Furthermore, many of the effects’ parameters can be modified in real time using MIDI controllers including velocity and aftertouch, as well as a small selection of MIDI CCs, which opens up all manner of performance possibilities.

The other significant additions are two Kaoss pads, one dedicated to modulation duties and the other to triggering notes and chords. The first of these allows you to emulate the effects of the pitch-bend and modulation wheels, or to control the filter’s cutoff frequency and resonance, or to assign any two of a huge range of destinations to the X and Y axes and then control them by sweeping your finger over the pad. The second allows you to choose one of numerous scales and then control the pitch of the note or the pitch and inversion of the chord produced by touching the pad. They can be great fun, whether used to modify the sounds you’re playing on a connected keyboard, or as sound generators for players who prefer not to play in the conventional manner.

When I first encountered it 10 years ago, I felt that the Legacy Mono/Poly was the least accurate of Korg’s soft synths, and this remains true for iMono/Poly, though sometimes in a good way. Yes, I know that it’s heresy but, because the soft synth’s filter is much tamer than the original’s, it can sometimes sound warmer and less aggressive, which can be ideal for things such as pads and orchestral sounds. If you want to create analogue nastiness, the original wins all the prizes — its filter can be downright belligerent and its X-Mod and FM effects sections still do an excellent job of sounding tortured.

Comparisons aside, you can obtain a huge range of sounds from iMono/Poly and, while there are 128 patches provided with it (and another 128 are available as an in-app purchase) I must admit that I wasn’t hugely enamoured of many of them because I found that the synth was capable of much — and I mean MUCH — greater depth than they offered. If, like me, you want to delve deeper, there are 20 template patches that I found to be good starting points for developing your own sounds.

The iMono/Poly is limited to a maximum of 32-note polyphony rather than the 128 notes of the Legacy version, but I didn’t find this to be a problem, even when playing polyphonically in Unison mode. So, were there any unpleasant surprises? Well, yes... two. The first was the MIDI implementation; there’s no MIDI ‘learn’ for the knobs and switches, and no MIDI Clock sync, the latter of which will be a significant limitation for many potential users. Furthermore, the synth engine recognises a maximum of four MIDI CCs as modulation sources at any given time. You use the setup menu to choose which will be recognised, whereupon they are designated Virtual Patch Control Change 1 – 4, and you can then direct them to the parameters of your choice within the modulation matrix. If you were expecting to be able to automate a large number of parameters and watch the knobs sweeping around while you sat back and sipped your vodka martini, you’re going to be disappointed, but if you treat the VPCCs as performance controls rather than automation facilities, you won’t go far wrong.

Secondly, while iMono/Poly responds to external MIDI, Core MIDI and Bluetooth MIDI, supports both Audiobus 3 and Inter-App Audio, and can be used as a Montpellier gadget (albeit with a somewhat different layout) within Korg Gadget, there’s no AU option. Some potential users are already complaining about this, so it will be interesting to see whether Korg respond.

I’ve never been a fan of the ‘studio in an iPad’ approach to music making, nor a strong advocate of using computers or tablets on stage. Nevertheless, having placed my iPad running iMono/Poly on the laptop tray of an 88-note master controller and having treated it as, in effect, the touch-screen of a large, virtual analogue synth, I was impressed; it sounded every bit as big as the keyboard on which it was sitting. Sure, it has a couple of limitations, but you can buy a top-of-the-range iPad, a controller of some description and the soft synth for less than the price of a beaten-up, 40-year-old Mono/Poly with no memories, no effects, no Kaoss pads and no modulation matrix, but replete with numerous mis-triggering keys and scratchy pots. A fuller test may or may not have thrown up some additional issues but, even if it did, iMono/Poly sounds great and represents excellent value for money.