As studio headphones go, the Lindy HF-40s are quite inexpensive, yet they have a very respectable technical specification. Of course the most important thing is how natural they sound, and that’s not something that’s easy to measure — empirical evaluation remains essential! Unlike many ’phones that sit on the outer ear, the HF-40s are circumaural, which means that they sit over the ear. They have a closed back, a feature that has the benefit of reducing spill and external noise when tracking, but sometimes at the expense of low-frequency accuracy. 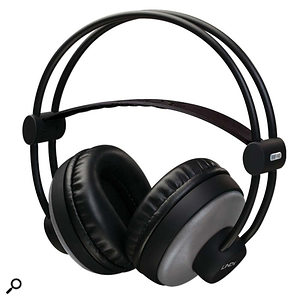 The transducers are 4Ω, 40mm full-range drivers with neodymium magnets, while the ear pads are described as soft, breathable protein leather (a kind of synthetic leather commonly used in headphones). An elasticated headband ensures a secure fit on all head sizes and, surprisingly for a lower-cost model, the included 1.2m cable (with gold-plated plug) is removable, and comes with a screw-on 3.5 to 6.3 mm stereo adaptor. A soft carry bag is also included and a free two-year warranty is offered as standard.

The frequency response is quoted as 10Hz to 22KHz, but frustratingly no dB tolerance figure is listed, so these figures don’t tell you much! The nominal total harmonic distortion (THD) is specified as better than 0.3 percent at 1KHz (1mW input), and the maximum input power handling is 500mW. Given that these headphones can generate 100dB (±3dB) with a 1mW input, that seems more than enough, by a wide margin.

When testing the HF-40s, I compared the performance with my own AKG K271s — while the latter are more costly, they are also a close-backed design that sit over the ear rather than on it. The first thing I noticed was that the AKGs felt more comfortable, as the HF-40s seemed to dig in just slightly below my ears. Of course, headphone fit is an individual thing: your own mileage will no doubt vary according to the size and shape of your head. The fit is very snug, though, and there was no need to fiddle with any headband adjustments.

Tonally, the Lindy HF-40s come over as tight-sounding without the overblown bass end some closed-back models impart. I did, however, find the top end to be somewhat abrasive. While that may actually help with intelligibility for performer monitoring during tracking, I’d be concerned about using them for mix decisions — the AKGs sounded noticeably smoother, the imaging had more depth and they were less fatiguing without sacrificing detail. It’s not a fair copmarison, of course, as the Lindy HF-40s are so affordable that you could buy two or three pairs for the price of one set of AKG K271s! The Lindys can play loudly without complaint, and they are effective in cutting down on spill, so if you already possess a decent set of headphones for mixing, you could do far worse than consider a pair or two of these for artist monitoring. Paul White