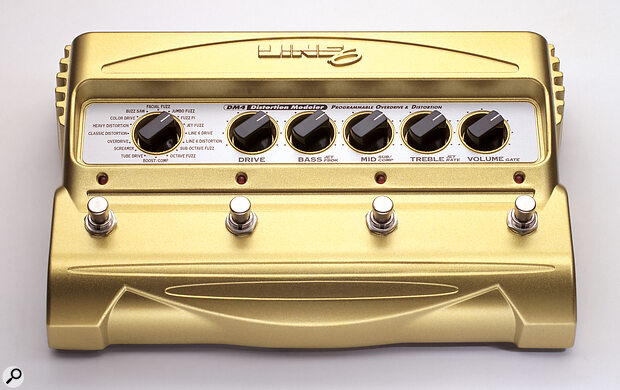 Paul White evaluates a unit designed to recreate the unique sound of many of the classic vintage distortion pedals.

Following in the footsteps of the Line 6 DL4 Delay and MM4 Modulation boxes (reviewed in SOS March 2000) comes the DM4, a heavy‑duty floor unit in gleaming gold, which is capable of digitally modelling 16 different types of distortion pedal. Like the other boxes in the series, the effects are selected and controlled from the front‑panel knobs, and four footswitches provide easy storage and recall of four user patches. Because many of the original pedals had only two or three controls, Line 6 have provided additional tone control whenever any of the DM4's front‑panel knobs are otherwise unassigned. The DM4 can be run from a wall‑wart PSU, or from batteries.

Most of the distortion boxes emulated here are solid‑state devices dating from the mid‑'60s to the present day. Only the Tube Driver emulates a valve preamp, and can thus produce a more subtle overdrive. Because vintage distortion pedals are often noisy, Line 6 have added a noise gate that may be switched in or out for all but the most DSP‑hungry model — the Jet Phaser. With none of the footswitches engaged, the unit is bypassed, with a relay providing a direct connection from the input to the output to avoid any audio thump. Note that no speaker simulator is included, but I tried it with a Pod, a Johnson J Station and a small valve amp, and it worked fine in all cases. A nice performance feature on the DM4 is that it allows you to morph between two different settings of the same model using an attached footpedal — this can be used to vary the sound in a number of expressive ways.

It's surprising how different the various distortion boxes can sound, but I can attest, having used some of the originals, that the emulations come very close. The range of pedals modelled runs right the way from warm and woolly to sharp and abrasive, so most options are covered. Most of the basic overdrive emulations were quite usable, though I couldn't get enough overdrive out of the Maestro‑inspired Buzz Saw to recreate that well‑worn 'Satisfaction' riff using my Strat — the downside of remaining authentic to the gain range of the original.

Once you get away from the basic overdrives, things get wierder. Jet Fuzz, for example, combines overdrive with flanging to produce that very dated whooshing‑jet effect. Weirder still are the two octave‑fuzz effects, one of which produces a sub‑octave and the other of which adds a tone an octave above the original prior to fuzzing the result — this Tychobrahe Octavia‑based model is particularly realistic in the way it chokes the sound after the signal level drops below a certain point.

Whatever your taste, there ought to be something here for you — though they haven't emulated every fuzz box ever made, the models chosen cover the available tonal range pretty well and the few oddball inclusions add to the interest. Obviously, if you're after a particular sound, you have to remember to use the right amp or amp model with the DM4 — for example, for the Hendrix sound, your best bet would be a Marshall stack. With the DM4 costing around the same as two or three separate analogue overdrive boxes, and having the benefit of being programmable, this is a pretty cost‑effective way to achieve a variety of overdrive flavours.

Dishing The Dirt: The DM4 Models

The Line 6 DM4 provides uncannily realistic emulations of a number of well‑known overdrive boxes in a well‑engineered package.