A spin‑off from the Line 6 M‑series multi‑effects floor units, the M5 is a single pedal that can run any one of 100 of the company's M‑series effect types, and can store up to 24 user effects as presets. A steel case incorporates a chromed roll bar to protect the six control knobs. The Model Select knob, which incorporates a push‑switch, is used to select delay, modulation, distortion, filter or reverb categories, and also allows you to select a model from within the chosen category. Parameters are displayed on the screen, and adjusted via the five remaining knobs. As with the other M‑series units, the display backlight changes colour depending on the effect category that you've loaded. Pressing and holding the Model Select knob saves your current setting, and pressing and holding the Tap knob brings up a guitar tuner. A setup routine lets you choose between true and electronic bypass, with the latter allowing reverb and delay tails to expire naturally. 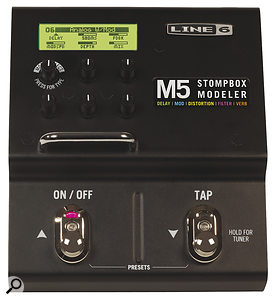 Pairs of input and output jacks provide the option of mono or stereo operation, plus there's MIDI In and Out to handle preset changes, MIDI expression pedals, tap tempo and SysEx preset data. A further jack accepts an optional expression pedal for controlling volume, wah and so on. Two foot switches control the bypass and tap‑tempo functions, or both can be held together to access the preset mode. The M5 comes with a universal power adaptor (9V at 500mA); there's no provision for battery operation.

The effects are the same as those offered by the other M‑Series boxes, full details of which can be found on Line 6's web site. Many are emulations of classic pedals, so as well as all the usual delays, chorus, flanging, phasing, overdrive, distortion, rotary speakers, reverb and so on, you also get several variations on each, plus some effective synth‑like filtering effects. The delay and mod treatments are first‑class, with analogue, tape and digital delay flavours available. There are also some great reverbs too, including springs, plates, natural spaces and a few abstract 'New Age' treatments. The overdrive emulations sound convincing for more extreme overdrive effects, though less so for those subtle, on‑the‑edge sounds, and I found the pitch-shifting a bit grainy. However, given that it costs no more than many single-function effects pedals, the M5 is a brilliant 'Swiss Army Knife' product, both for studio recording and for live performance, and it's worth buying for the reverb, mod and delay effects alone.

The M5 offers nothing the other M‑series boxes can't deliver, but having a single pedal that can be loaded with any M‑series effect is extremely useful, and well worth the asking price.  Paul White