Pod Farm, which replaces Line 6's earlier Gearbox software, is a VST, RTAS and AU plug‑in for Mac and PC that offers Line 6's amp and effect modelling for guitarists, bassists and even vocalists. There are two versions: regular and 'Platinum'. The latter comes with 250 models covering amps, cabs, studio effects, stomp-box effects and a handful of studio preamps. It's essentially the software version of a fully expanded Pod X3. The basic version features fewer models, but otherwise offers the same functionality. Authorisation is completed on‑line using the very friendly Line 6 Monkey utility software, which also looks after updates and purchased add‑ons for you. This is the first Line 6 software that can be used without owning one of their hardware products: authorisation is linked either to a specific piece of Line 6 hardware or an iLok dongle. 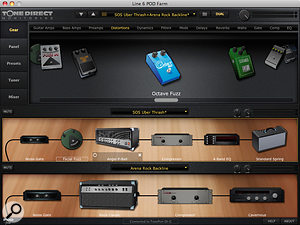 Pod Farm includes a good range of effects. You can select up to two to go before the preamp, and build more complex chains in the effects loop.

The user interface is based on a carousel browser, with graphic representations of the amps, cabs and effects — more about how that works later. Your choice of stomp effect is placed to the left of the amp and insert loop effects to the right. Activating dual mode allows you to create two separate setups, which can be balanced and mixed, or used as two separate record sources. Pod Farm also includes a large guitar tuner, and another browser to access the wide range of presets. Both input and output gain controls are available on the Gear page, along with metering and panning for the two chains in dual mode. There are also mute buttons so that you can set up each signal path individually.

The basic version has 18 classic guitar amp models, including the most obvious US and UK choices. Platinum includes 78, as well as 24 cabinets, 28 bass amps, 22 bass cabs, 97 effects and six mic preamps. Although the model list is shorter in the standard version, you still get five dedicated bass amps, 20 effects and all six preamps in addition to the guitar amps. You can add model packs to the Basic version, or use ones you already own, but only if you have a Line 6 audio interface (you can't do it with iLok), because this is where the extra plug‑ins are registered. Of course, if you buy the Platinum version you already have all the available add‑ons. Both versions can be used as a plug-in or in stand‑alone mode, where Line 6's Pod X3 paradigm allows two parallel chains of amps and effects to be set up and then mixed.

Using Pod Farm is simplicity itself. Buttons on the left of the screen offer a choice of Gear, Panel, Presets, Tuner or Mixer, and when Gear is selected, the categories of amp and effects types are displayed along the top of the window. Clicking on any of them brings that section into view in the carousel for selection, but if you find the blur of countless amps and pedals whizzing by too distracting, you can make your choice from the pull‑down menu. Once the icon relating to your choice is in the centre of the screen, you just drag it down into the assembly area. The limitations on what effects can be used at the same time seem to be similar to those on the Pod X3, so you can't, for example, put two stomp boxes in series before the amp, although you can have multiple devices in a chain after a preamp.

Double‑clicking an icon opens its control panel, as does selecting the Panel tab, and here you can twiddle the knobs in the traditional way. When an icon is selected, a transparent box appears below it, with a bypass button and a close button to remove the item from the signal path. In Panel view, amp models can be routed to a different speaker cabinet, and clicking on the Cab button shows not only the cabinet type, but also the mic type and how far back in the room the cabinet is. Dragging it further back increases the 'Air' room‑reflection modelling that's built into the program. While some other manufacturers may not include bass models in their guitar modelling software, Pod Farm offers some great‑sounding bass rigs, and I was also pleasantly surprised by the usefulness of the studio preamp models, most of which offer a distinctive coloration and tonal range.

Like Gearbox, Pod Farm supports ToneDirect Monitoring when running in stand‑alone mode with Line 6 hardware. This offers a very low‑latency signal path that's routed directly to your interface's monitor outputs, while the source signal is simultaneously fed to your DAW software, where it can be recorded with or without the Pod Farm processing in place. Recording the dry guitar signal lets you change the sound after recording, using Pod Farm as a plug‑in, and in a DAW with larger than ideal latency, or where a large buffer size has been chosen to aid stability, ToneDirect Monitoring provides a good means of tracking without the DAW's latency compromising your performance.

The Record Send Source menu in the Mixer page lists each of the dry or processed options for sending to your DAW. In dual mode, two mono sources can be processed separately: for example, one guitar and one vocal mic, each going via appropriate amp/preamp and effects models. You can also opt to record a dry mono version via one output and a processed version via the second output, so it's all pretty flexible. Level faders are available for both Source channels, and there's an 18dB boost button for use with audio interfaces that need to see a high level to reach digital full scale. 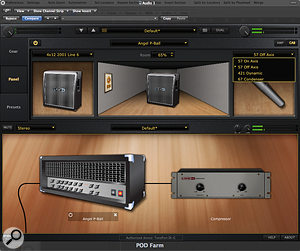 The cabinet can be dragged around the room to give more precise control over the sound, by altering the amount and type of room reflections versus direct sound.

Farm it may be, but there's nothing agricultural about the sound. Despite the huge range of amp types in the Platinum version, most players will quickly gravitate to the few that suit them best: I invariably end up looking for the best blues sounds that are just slightly dirty, because these tend to be the most difficult sounds to get right — but Pod Farm tackles them really well. If Uber Filth is your thing, there are plenty of more aggressive combinations to get you shredding, and no shortage of inspiration amongst the presets. There are some nice, jangly clean amps in there too — and they don't sound clinical or sterile: they ring nicely and respond well to dropping a compressor in front of them. Of the effects, I particularly like the tape delay, rotary speaker and spring reverb, but the designers have really gone to town on filter pedals, and even some pseudo synth effects. There's also no shortage of fuzz and distortion devices, each of which has its own character. A noise gate is always available, so its a good idea to employ this when creating heavy overdrive sounds. The one thing you don't get is a pitch shifter, for creating a slightly detuned sound — which is a pity — and a tube-mic model would have been nice too.

Pod Farm is one of the least costly amp‑modelling programs around: the Platinum version costs £200$300 but the standard version is only £77$100 and online I found some Line 6 hardware that was cheaper than that and gave you a free download. Owners of some Line 6 hardware are entitled to a free download too. So while you might be tempted to dismiss Pod Farm as being not entirely serious, it really does compare with the best that its competitors have to offer. You get some really solid bass amp models and a handful of studio preamps that provide useful alternative tonal colours too. Some people might argue that the sounds aren't entirely 'authentic', but they certainly get pretty close and, more to the point, they're musically satisfying and responsive, conveying a sense of power and depth. The sound may not be the same as when you're standing in front of a big stack, but it's not far off what you hear played back after you've stuck a mic in front of one! Paul White