Do these hand‑made, single‑driver speakers sound as good as they look?

Checking a mix‑in‑progress on a 'grot box' speaker of one kind or another has been standard practice since, at least, the early '70s, and probably much earlier. The idea, of course, is to check that the mix works acceptably on the small speakers typical of portable or car radios, on TVs and, these days, on laptops and iPod docks. Often a single 'mix‑reference' speaker is used, rather than a pair, to check mono‑compatibility, too.

The Auratone 5C 'Super Sound Cube' — often referred to, somewhat unfairly, as the 'Horrortone' — was one of the most popular examples (see 'History Lesson' box). Its single 'full‑range' speaker design offered some advantages over the more elaborate Yamaha NS10, primarily in being smaller and cheaper, and in avoiding the crossover, driver integration and comb‑filtering issues associated with all two‑way designs. The inevitably mid‑forward sound presentation, combined with a tight, sealed‑box time‑domain response, ensured that the Auratone was very good at revealing the kinds of balance (and timing) imperfections that can be easily masked by high‑end and genuinely full‑range monitors.

I should say at this point that the widely used 'grot box' term — while an entirely appropriate description of the 'vinyl wood' wrapping on the original 5Cs — is somewhat misleading. The usefulness of this type of monitor comes from the beneficially constrained frequency response, 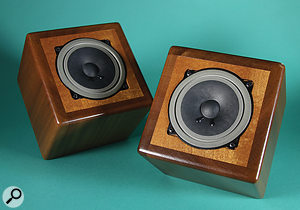 rather than any kind of 'lo‑fi' reproduction, and the better examples of the genre actually have very low distortion, which is partly why they are so revealing.

The Auratone has long been out of production, of course, but the industry's need for a reliable 'grot box' speaker never went away, and today there are many alternatives vying to fulfil that role. One of the latest to join the fray is the Littlepapercones mix‑reference monitor, launched in August last year. This elegant, compact, passive monitor is designed and built entirely in the UK. The speakers are assembled at the company's headquarters in Twickenham, Middlesex, while the Sapele wood cabinets — which can fairly, I think, be described as beautiful — are made in the north of England with wood from 100‑percent FSC (Forestry Stewardship Council) sustainable forests. Sapele wood is similar to mahogany, with an attractive grain and high density, and is often used in the bodies of acoustic guitars and other musical instruments.

This passive monitor is about 15 percent larger in all dimensions than the old Auratone 5C, with the depth being roughly the same as the depth (and width) of the originals. So the new monitor measures 190 x 190 x 165 mm (HWD) and weighs 2.6kg. There is no front grille: the driver is exposed and slightly proud of the cabinet, with its chassis sitting on a rubber O‑ring gasket in a shallow baffle rebate.

I was supplied with a pair of Littlepapercones for the review, but these are just two individual units rather than a 'stereo matched pair' as such. The wood grain patterns on the two units were similar, but not perfectly mirrored in the way that most veneered hi‑fi speakers are, not that anyone is likely to be bothered: the cabinets are charmingly more 'furniture' than 'functional', regardless. The speakers ship in polystyrene‑sheet wrappings in sturdy cardboard boxes, but appear to come without any documentation, and there is only minimal information on the company web site. The published frequency response gives a rather vague 70Hz to 18kHz (without tolerances), and the nominal impedance is 8Ω, but no further specifications are given — not even the sensitivity.

However, the sensitivity is clearly adequate, as a nominal 60W of amplifier power could easily produce uncomfortable volume from a pair of Littlepapercones at 1.5 metres. There are, apparently, no immediate plans to offer a powered version of the Littlepapercone monitor, but the manufacturer has not ruled the idea out completely for the future.

The driver features a traditional paper cone (hence the name!) suspended from an inverted roll surround. It's a little larger than the original 5C's speaker, at 5.25‑inches, and this, combined with the slightly expanded cabinet, delivers a reasonably powerful upper‑bass quality, as well as the ability to deliver surprisingly high SPLs if needed. The strong and very well‑damped cabinet is almost completely full of mineral wool to control internal reflections, and heavy‑duty wiring connects the driver directly to the rear‑panel terminals. Unusually, these gold‑plated and colour‑coded screw terminals don't accept standard 4mm 'banana' plugs, and are clearly intended only for bare wires. However, the cable holes are actually large enough to accept 4mm plugs if you don't mind screwing the outer collar down on them (potentially causing damage to the plugs). 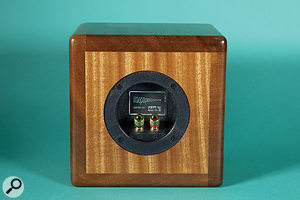 Gold‑plated screw‑on terminals provide connectivity to your amp. power rating isn't given, and the maker's web site states only that: "Most [sic] any amp, from your little sister/daughter's leftover hi‑fi to a Bryston, will work.” Consequently, I considered briefly hooking these monitors up to my usual reference power amp — a mighty Bryston 4B — but considered the combination rather too unrepresentative of most users' installations! So instead I wired them up to a more modest and appropriate Rotel RB970‑BX power amplifier (conservatively rated at 60W per channel into 8Ω), and the combination worked very well indeed. I also ran a single speaker on the same amp in bridged mode, and found it responded to the additional power well, with crisper transients and bass control, as you would expect.

The sound quality is entirely as you would expect, too. It's very strong in the mid-range, with smoothly attenuated highs and lows. Importantly, though, mid‑range coloration and distortion seem to be very low indeed, and the cabinets proved entirely free of resonances, which means that the Littlepapercones sound very natural and crystal clear. With such a forward mid-range, mix imbalances and inappropriate EQ choices in this critical part of the spectrum are revealed fairly ruthlessly — which is a good thing. When a mix sounds well balanced on these monitors you can be reasonably confident that it will travel well.

As a stereo pair, imaging was spacious and stable, with a solid phantom centre and good depth. Switching to a single speaker in a mono‑check application, I found front‑to‑back perspectives of mixes were portrayed well — not something that all 'grot boxes' seem able to deliver — with low‑level details and reverbs all revealed in a usefully analytical way. Obviously, there is no low bass to speak of, but the upper harmonics of bass instruments are delineated very clearly, and the timing and tonal relationship between kick drum and bass guitar are easily distinguished thanks to a complete freedom from port resonance smearing.

These attractive little monitors are sold individually (because so many customers only require one as a mono‑check reference), direct from the UK manufacturer at £150 (including VAT) plus shipping (totalling £162 in the UK for a single speaker). This may seem a little on the expensive side for a small passive speaker when compared to some of the established alternatives — and, of course, the cost of a suitable amplifier may need to be factored into the total price for some potential purchasers. However, for those with a redundant amplifier kicking about after upgrading to active main monitors, and given the stylish good‑looks and the precise, informative sound quality, I'm sure many will be seduced by the undoubted allure of these Littlepapercones.

The list is expansive, starting with the original and still much‑loved Auratone 5C, examples of which appear from time to time on the secondhand market. Newer alternative designs (most of which have built‑in power amps) include the Avantone Pro MixCubes, Behringer Behritone C5A and C50A, Canford Audio's Diecast Speaker, the Fostex 6301, KS Digital C5 coaxial‑monitor, Triple P Pyramid, Yamaha MS101 MkIII, and the excellent but discontinued Sony SMS 1P.

Originating from the Auratone Corporation in California, the 5C 'Super Sound Cube' monitor couldn't have been designed any simpler. This passive speaker employed a single, round, five‑inch (127mm) driver with a relatively chunky 0.7kg magnet assembly mounted in a sealed, low‑resonance 'Acousticwood' cabinet. While very good for its day, the driver wasn't quite as clean and transparent as some modern‑day equivalents, but it was still a very useful analytical tool.

This diminutive 'monitor' measured 165 x 165 x 146 mm (HWD), and was finished in a rather tacky walnut wood‑grain vinyl covering, which the marketing blurb described as "styled for modern studio/office décor”! A black foam grille offered the driver some dust protection, but it usually fell off and got lost! Auratone offered several variations on the same theme, including the 5W Super Sound Wedge, the 5PC Super Pro Cube, and the 5RC Super Road Cube (see brochure image), but it was the original 5C that became the 'industry standard'. 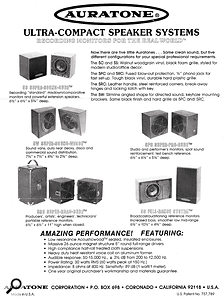 A brochure for the original Auratone range of speakers.

The 5C was claimed to deliver an 'audible response' of 50Hz to 15kHz, qualified by a rather more meaningful specification of 200Hz to 12.5kHz with the slightly curious tolerance range of ±3.5dB. The power rating was 30W RMS and 60W peak, with a nominal impedance of 8Ω and a sensitivity of 89dB/W/m.

A classy variation on the classic Auratone concept, built with a high‑quality cabinet and carefully selected driver.

£162 per speaker, including VAT and shipping within the UK.

From DX to MODX with Manny Fernandez | Podcast
1 week 19 hours ago.