For some years now, Mackie have manufactured two ranges of analogue mixers. The more affordable was the VLZ series, the first three generations of which received plenty of praise. For example, when reviewing the 1604 VLZ3 for SOS, Hugh Robjohns remarked that they "have always been amongst the best of any budget console and, for that matter, nipping at the heels of many high‑end consoles”. The consoles in Mackie's flagship Onyx range, meanwhile, were more expensive and employed a different preamp design — still based on the same XDR circuit, but including parts custom-made to Mackie's specification. I've always felt that the Onyxes sounded just that little bit less 'cold' at the low end than that VLZ mixers: a hint 'fatter', shall we say, but not in a hyped way. Despite the 'colour', the distortion figures for the Onyx preamps are extremely low, with the frequency response extending up to 50kHz, so whatever magic they impart must be pretty subtle.

This new fourth generation of VLZ mixer comes in configurations that offer anything from four to 32 channels. In fact, in most respects the VLZ4 mixers can be looked at as updated versions of their VLZ3 predecessors, as they offer very similar feature sets. 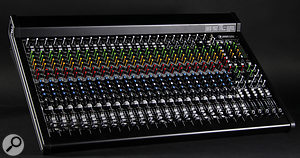 I chose to review the 24‑channel model, simply because it is the smallest model to contain the full feature set of the VLZ4 range. Like others in the range, the 2404 VLZ4 is of folded‑steel construction, with moulded end panels, direct universal voltage mains power (there are no wall warts!) and a conventional wedge‑shape format. All the connectors other than the BNC light socket are on the rear panel, along with global phantom‑power switching and a separate mono output, in addition to the main left and right outs. Even the headphone jack is on the back. The main and mono outs are duplicated on jacks and XLRs, with the other connectors being jacks except for the mic input XLRs (which include the talkback input) and stereo tape in and out (RCA phonos). A built‑in 4x2 USB interface permits four‑track recording from a combination of the two bus pairs, the mains or aux 5/6 directly to a computer, with stereo audio playback via the mixer channels 23/24. This interface is capable of 24‑bit recording at up to 48kHz, which is fine for most sources — and that 24‑bit figure is welcome in a live‑meets‑recording desk like this.

Despite its comprehensive feature set, the mixer remains pretty compact, due in part to the use of 60mm faders rather than the 100mm type normally used on large consoles. The three‑band EQ with the sweepable mid-range is found on mic/line channels 1‑20, while that on the stereo line‑only channels (21/22 and 23/24) has a fixed‑frequency mid control. All of the mic/line inputs, the auxiliary sends, the bus outputs and the main stereo outputs are fitted with TRS jack insert points. There's no EQ bypass, but other than that, all the essential features are present: pads and 100Hz, third‑order low‑cut filters on the input stage, full routing to the buses and mains, a control-room output, both mute and solo buttons and dual‑LED signal‑present and overload indicators on each channel.

The compressors can be found on channels 17‑20 and

The groups, master and control room section of the 2404 VLZ4, complete with USB interface and FX channel controls. on the four subgroups, and offer simple 'clockwise is more' operation, similar in concept to the compressors fitted to many Yamaha mixers and Focusrite's Octopre MkII Dynamic, for example. The two effects processors offer a range of 24 of what Mackie describe as 'gig‑ready' effects, and both include a tap‑tempo delay function. Switches in each channel strip select whether the last two sends feed these on‑board effects or the respective physical aux outputs. Effects are selected by number using a rotary encoder; new effects load as soon as you stop turning the dial. When a tap-tempo delay is selected, a yellow LED flashes at the delay rate, and pressing the encoder at the new rate you need sets the tempo.

In addition to auxes three and four being switchable as a pair to pre‑ or post‑fader (aux one and two are fixed pre‑fader), each send has its own master level control with AFL. There are aux returns for auxes one to four, and all four groups have separate left, right and solo routing buttons for feeding into the main mix for subgrouping purposes. Just two 12-segment LED ladder meters serve the whole mixer for monitoring output levels and PFL levels (marked at 0VU for optimal gain settings when using PFL) with the master output controlled by a single stereo fader. Such economies have helped keep the master section's size down to the width of five channels. Talkback, which requires an external microphone, can be routed to auxes one through four or to the main output. However, both buttons are latching, which opens up the possibility of being heard saying something disparaging about the drummer.

There's little point in me trying to recreate the user manual here: what's more important is the way that this mixer actually performs in terms of noise, sound quality, EQ and effects, as well as checking that nothing vital is missing from the feature set.

First off, then, those Onyx preamps sound very clean and natural to my ears, with plenty of gain available: while they do seem to impart a little pleasing character, this is just as subtle as I'd remembered. On the channels with compressors, the mic gain affects the amount of compression available, with too low a level giving the compressor insufficient to work with. Using the solo button to put the channel's level up on the meter can help set mic gain correctly (you can switch the meters between Solo and PFL in the master section). Once you've done so, the compressors sound surprisingly transparent, taming the peaks without significantly changing the subjective sound unless you've really wound things up. Transparent compression is usually what you need in a live-sound situation, so that's an application in which these should serve well.

I've no complaints about

The mono channels (left) all feature swept mid frequency EQs, which the stereo ones (right) lack. Some, including this one also feature a useful one-knob comrpessor.the EQ, either. It's positive and workmanlike, with a generous enough mid‑range sweep (100Hz to 8kHz) to tackle the pesky lower mids that can lead to congestion and boxiness. For the stereo channels, the mid frequencies are set to 2.5kHz and 400Hz. Both the high and low sections are shelving equalisers based on conventional curves that produce a predictable and, importantly, musical result, with corner frequencies at 12kHz and 100Hz for all channels.

While the reverbs on offer might not cause any loss of sleep at Lexicon or Bricasti, they do cover a wide range, and are perfectly adequate for live performance, particularly the versatile plate‑like options. All the effect program names are screened onto the front of the 'bridge' section of the mixer. The first 14 effects are reverbs and include one gated reverb emulation, with times ranging from shorter than you're ever likely to want to cathedral‑like excess. The remaining effects are delays of varying tonalities, with and without feedback. These do include slap and ADT‑style short repeats, but the majority have the tap‑tempo feature enabled. Chorus is also added to one of the reverbs and one of the delays. Program 24 combines delay with reverb, a setting in which the reverb itself is fixed but the delay time can be adjusted using the tap tempo.

Both effects have separate controls for sending the effected signal to the main mix and to auxes one and two, enabling the performers to have 'a bit of wet' in their monitors. An overall master FX level control is also provided for each effect section, along with individual effect mute buttons and mute status LEDs. When the mixer is powered up, the last choice of effects programs loads automatically though the tap‑tempo rate comes back up with its default setting. Likewise if you change to a different program and then back again, the tap tempo reverts to its default for the selected program.

Operationally speaking, the mixer is quite conventional, and anyone with any experience of multi‑bus mixers should have no trouble using it. Sensible colour coding is used to differentiate the functions of the various knobs, and although there are no dedicated mute LEDs, the channel overload LED locks on solidly when the channel mute is active. In fact, other than the latching talkback buttons (ideally, I'd prefer momentary ones for this application) and the location of the Talk To Main button right above the main fader, there's little to take issue with. As with all Mackie mixers, there's an adequate amount of headroom, and though no mixer is entirely silent, the background circuit hiss is low enough to be of no practical concern whatsoever. Similarly, with the PFL levels set according to the nominal Level Set mark on the meters, breakthrough and crosstalk with faders at minimum is just audible at full headphone gain, but below the background hiss level.

All of the I/O — even the headphone output — is hosted on the rear panel, in a typically neat Mackie layout. If you're in the habit of pushing the input levels so that the overload LEDs flash on a regular basis, the level of breakthrough is a little higher but, again, this is nothing that should affect real‑world performance.

The USB interface side of things worked fine with my Mac, with no need for any drivers, setups or other arcane procedures: the Mac saw the device as soon as it was plugged in, asked if I wanted to use it and the job was done. Test recordings made in Logic Pro X and subsequent playback showed it to work very reliably. The USB routing also makes it possible to use two computer‑based plug‑in chains within the mixer if you wish to, although you would, of course, have to make sure that round-trip latency isn't a problem.

With the 2404 VLZ4, Mackie have continued in the tradition of combining a practical feature set, tough construction and solid sound quality at a sensible price. The design may be more evolution than revolution, but that's usually what you're looking for in a live-sound mixer! Having 20 mic inputs makes this model large enough to handle typical band work, while the simple USB recording facility makes it practical to record vocals and instruments to separate tracks or to capture rehearsals. For my own live‑sound projects I'm now pretty much sold on the Mackie DL1604, as the iPad controllability means I can dispense with multicores and outboard graphic EQs, but if you're more comfortable with a traditional analogue mixer — or need the additional input channels — the 2404 VLZ4 should fit the bill nicely.

The obvious lower-cost alternatives come from the likes of Samson, Behringer, Phonic and Alto, with brands such as Yamaha, Soundcraft and Allen & Heath meeting the needs of those with a slightly bigger budget.

This user-friendly mixer offers all the essentials at a sensible price, and would be a good choice for both recording and live‑sound applications.