The Ohm64 is the latest in a recent rash of grid‑based control surfaces. Does it stand out from the crowd? 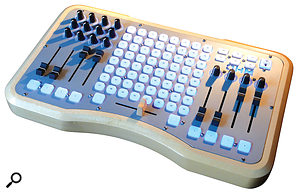 Grid-based control surfaces, it would appear, are rather like London buses: there's nothing for ages, and then four come along at once. We've had the Monome 64 (reviewed in the September 2008 issue of SOS), the minimal, boutique, hand-crafted wooden button grid with its community-led collection of software tools and applications; Akai's APC40 (reviewed in the September 2009 issue of SOS), a dedicated controller featuring faders and knobs as well as a button matrix, and designed for tight integration with Ableton's Live software; and Novation's new Launchpad (reviewed in the December 2009 issue), a slim, buttons-only controller again designed for use with Ableton Live. If that wasn't enough grid action already, let me introduce you to the Livid Instruments Ohm64, another device featuring a central button grid flanked by additional controls.

Livid Instruments were formed in 2003, and the Ohm64 actually has a heritage reaching back to early experimental instruments custom-built from 2000 onwards, so this isn't just a 'me-too' item designed to cash in on the current fashion for grids. Livid have a background in the VJ scene — they also sell VJ and video-processing software — and the previous generation of Ohm64 (known now as the Ohm Classic) was a grid controller aimed firmly at the VJ performance market. The Ohm64 upgrades the Ohm Classic with features designed to appeal to both the video and the music market, such as physical MIDI ports. This makes perfect sense: many artists would argue that the boundary between music and visual performance is becoming increasingly blurred, so a hybrid controller seems like a natural evolutionary step.

The Ohm64 bears a lot of similarities to the Monome: it's a wooden-cased, hand-assembled USB device with a grid of illuminated silicone buttons. Unlike the APC40 and Launchpad, both of which feature tri-colour LEDs, the Ohm64's illumination is a monochromatic blue. Unlike the Monome, the Ohm64 has numeric labels on most of its buttons, so it compromises minimalism in the name of practicality.

Compared to the Monome, the Ohm64 is surprisingly large. It's wide enough to be rackmountable, and six Monome 64s would fit onto the same desk space. This is partly because the button grid is relatively large in scale, and partly because of the room needed for the Ohm64's additional controls. Each side of the button grid is a control area roughly styled after a mixing desk, and one mental model of the Ohm64 might be as an eight-channel mixing control surface that has been cut down the middle to have a button grid inserted. Each left-hand 'channel' has a fader, three knobs and one button; the right-hand channels are the same, except that they have only a single knob each, to leave room for some global controls. Underneath the button grid are a DJ-style crossfader and two additional buttons.

Despite using terms like 'mixer' and 'channel', there is no requirement to treat the Ohm64's knobs and faders as conventional mixing controls: as a MIDI device it is completely generic, and applications can be mapped to the controls in any way you wish, respecting or ignoring the numeric labels on the buttons.

The rear panel of the Ohm64 carries a USB socket and a pair of MIDI DIN sockets (one In, one Out), which is rare for controllers these days. (None of the other grid controllers I've mentioned have physical MIDI ports.) The device is USB powered and class-compliant: it operates as a standard MIDI device in OS X and Windows without additional drivers. 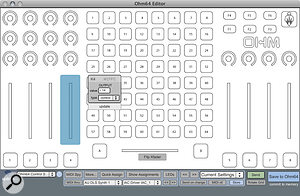 Ohm64Editor, the dedicated application for configuring the Ohm64 and altering its MIDI behaviour.

Due to its size and layout, the Ohm64 is clearly designed to be positioned centrally for studio or stage use. Ergonomically, the controls fall neatly under one's hands, one fader per finger, with everything else within easy reach. The faders have a smooth, quality feel to them. Sadly — but unsurprisingly at this price point — the faders are not motorised, and the knobs are potentiometers rather than infinite encoders, the ring illumination around the knobs being static, but if you are happy with your software's ability to latch to controller movements, this shouldn't be a problem.

The Ohm64 operates as a generic MIDI controller, sending MIDI note events for button presses and controller events for fader and knob movements. It receives MIDI to turn on and off the button LEDs.

As a MIDI input device, the Ohm64 can be used directly with any MIDI software that allows notes and controllers to be mapped or 'learned' — and there's a MIDI-style 'local control' mode, where button presses illuminate the LEDs directly, without software support. The device can also be employed purely as a hardware MIDI controller, using its own physical MIDI Out port, although for technical reasons it still needs to be connected to a running MIDI application on a computer via its USB port.

Software applications see the Ohm64 as a twin-port MIDI device (where each port comprises a MIDI In and a MIDI Out): one port addresses the Ohm64's own controls, and the other is patched through to the Ohm64's physical MIDI sockets, allowing it to be used as a generic 1x1 MIDI interface. 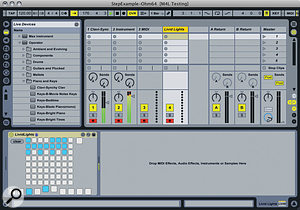 LividStep, the Max For Live step sequencer for the Ohm64, showing the button and LED display panel.

The Ohm64 isn't shipped with a CD containing bundled software, but lots is available for download from Livid's web site. Most important is Ohm64Editor, an editor that gives access to all of the Ohm64's settings, and enables them to be stored in the device's Flash RAM. The editor allows the MIDI note and controller bindings of the faders, knobs and buttons to be changed, and supports presets for changing the entire state of the device. There are utility screens for altering MIDI modes, and demo features, such as an ASCII character display function for the button grid.

Every Ohm64 comes with a licence key for CellDNA, Livid's own commercial VJ performance software. CellDNA has special support for the Ohm64, so the unit's controls are pre-mapped to video-processing parameters and its LEDs light up to indicate active video clips.

Livid's web site offers a selection of additional free downloads, all implemented as MaxMSP patchers and available freely in source form. OhmSound, for example, is a simple FM synthesizer, with the Ohm64's button grid operating as a keyboard and its panel of knobs mapped to synthesis parameters. LividSampler is a basic sample‑triggering program.

Every grid controller needs a step sequencer, and the Ohm64 is no exception: LividStep is a multitrack sequencer implemented in Max For Live, so it runs as a control interface inside Ableton Live, allowing interactive editing and sequencing within up to eight MIDI tracks. It makes good use of the Ohm64's control layout: the grid buttons represent the quantised notes in each of the tracks, while the knobs and faders map to instrument parameters and mixing controls, so the functions of sound editing and sequencing are combined into a single interface. Documentation is sparse, but there are tutorial videos on-line which present the sequencer's major features. Of course, you need both Ableton Live and Max For Live in order to use it, so it's only really of academic interest if you don't already own both packages.

Finally, the Ohm64 capitalises on the large body of applications already written for the Monome, via an emulator called MonomeBridge, which translates the Monome's OSC network protocol into the Ohm64's MIDI System Exclusive messages. In practice, this works well enough, although sharp-eyed observers might notice that LED refreshing is slightly slower than with a real Monome, possible due to performance overheads in the emulator or the USB MIDI link. Realistically, though, this is unlikely to pose problems unless you are very fussy about visual display.

Choice of control surface is a very personal thing: even though the device itself may not make any sound, it has to feel as comfortable and intuitive as an actual musical instrument. Particular devices will work for some people and not others, purely due to personal taste.

The Ohm64 is relatively large, and is laid out in a manner that only really works if it's treated as your main controller. Used in that way, it functions very well: it's built and finished to a high standard, and the controls are arranged clearly and ergonomically. If you already have a grid controller and a fader box or two, the chief argument in favour of the Ohm64 is its integrated design, minimal cabling, and rear‑panel MIDI connectors.

If you're a video artist, you get a free licence for CellDNA and are potentially good to go. As a musician, you can assign the Ohm64's controls to generate whatever MIDI data you want and link it into existing software, or fire up the Monome emulator and use any of the free Monome music applications. Of all the Livid applications, the LividStep sequencer is the most engaging, but only of real interest to Max for Live users.

I like the Ohm64 a lot, and if its faders were motorised I'd buy one in a shot, but as the owner of a Monome, a Motor Mix, a Novation Remote, an Emu Launchpad and a Peavey PC1600, I really need to kick my controller‑buying habit. However, if the Ohm64's design and feature set appeal to you, you should definitely give it some consideration.

Because of its size and layout, the Ohm64 wants to be centre stage, but if it fits into your working process it's well worth checking out.