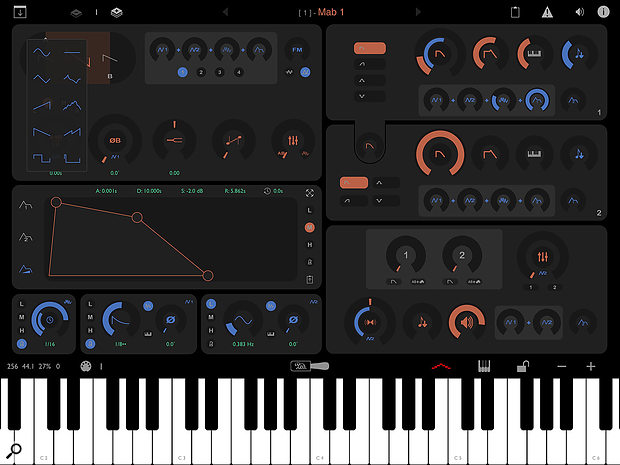 Layr’s synth engine — known as a Layer — can be stacked multiple times to form an Instrument.

Living Memory Software’s previous iOS music app was Ostinator, a very effective ‘looper pedal in an app’. Ostinator was a pretty modest concept and perhaps didn’t quite prepare us for the team’s latest app — Layr — which is something considerably more ambitious. Layr doesn’t have the ‘cool’ of being an emulation of a specific classic synth of old, nor does it come from a stable with an established track record in software synths. It does, however, arrive fully-formed and packing a considerable punch. If you are a fan of iOS synths that allow you to get your programming hands dirty, then Layr is going to be of considerable interest.

At its core, Layr is built upon a solid, but fairly conventional, twin–oscillator synth engine. A single instance of this — termed a Layer in Layr speak — is capable in its own right, but the novelty is that you can stack multiple Layers if you wish to form an Instrument. And, within a single Layr project — termed a Performance — you can also have multiple Instruments, each built on one or more Layers. Each Instrument can be set to respond to a different MIDI channel, so Layr is properly multi-timbral. And, by the time you stack two or more Layers into an instrument, the sounds can get very rich and engaging. The basic synth engine might be relatively straightforward but, a few Layers in, the sound it generates can get pretty big. 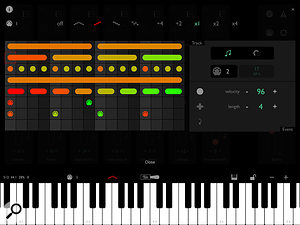 Layr’s arpeggiator is a very clever design and hugely creative.There are some great touches to the design. The UI itself is modern and very slick. The MIDI options are flexible so, for example, you can define a MIDI note range for each Layer within an Instrument, meaning sounds can actually be built on different Layer combinations over the full MIDI note range. There is also a comprehensive MIDI Learn system. However, perhaps the other real highlight of the design is the arpeggiator function. This accepts incoming MIDI note data from a single source, but includes eight lanes, each with 16 steps, that can be set to transmit to different MIDI channels (Instruments) within Layr, send various control data, and also be set to operate at different step lengths. If this sounds like it might be fun, then it is, and you can create all sorts of interesting arpeggiator patterns — including polyrhythmic ones — with this feature. It is, frankly, brilliant.

The app ships with an impressive collection of preset sounds, and also includes delay, reverb and EQ effects. It has Audiobus and IAA support and is universal, running on iPhone 5S/iPad Air or newer. Yes, it would be great to see Ableton Link and AU support added but, even though it is priced towards the top of the iOS music app tree, Layr is excellent value. Despite the depth available, given the relatively straightforward synth engine that serves as its basic sound building block, it is also one that novice programmers could get into. Layr is a great design with some novel features and, most importantly, it sounds great. Well worth exploring.