Lunastone pedals are designed in Denmark by Steen Grøntved, who is both an engineer and a guitar player. Most of his design efforts start out as attempts to come up with something that works for him, and his design aim with the True Overdrive 1 was to emulate the way valve circuitry behaves. 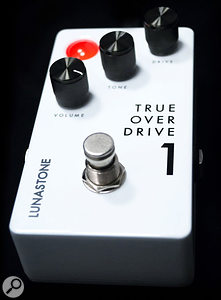 Many overdrive pedals generate most of their distortion around a single gain stage that has diodes either in the feedback loop or across the output of an op-amp, but valve amplifiers comprise several stages, with each contributing to the distortion and dynamic performance of the whole. In his design, Steen Grøntved has eschewed diodes and instead used cascaded gain stages to replicate the behaviour of valves, using a combination of Bipolar, JFET, MOSFET and op-amp circuitry, so that the sound cleans up very naturally as you back off the guitar volume control or play quieter. His various other overdrive pedals take the same approach, but are voiced differently — this particular pedal, for example, is also available in a True Overdrive 2 version, which is voiced for more low end.

The pedal is housed in a compact, die-cast box, with side-mounted metal jacks and an end-mounted 9V (centre-negative) power inlet, though battery power is also catered for. The footswitch operates as a true bypass. Control-wise, the True Overdrive 1 is very conventional, with Drive and Volume controls augmented by a Tone control. The last of these brightens the sound clockwise of its centre position, and trims the highs when anti-clockwise of centre. The diagonal arrangement of the controls with the tone in the centre was, apparently, something Steen came up with to allow him to nudge the outer two controls with his foot during performance.

In use, the pedal can run from almost clean up to classic rock levels of overdrive and, as intended, reacts well to controlling the amount of overdrive by adjusting the guitar’s output level. The sound retains the tonal integrity of the instrument and doesn’t get excessively messy when more drive is added — I’d describe the overall tonal character as ‘throaty’, leaning towards a Billy Gibbons-style grunt — and all this is achieved without adding excessive circuit noise. (Some useful audio demos are available on the company’s web site, which you’ll find at the bottom of this review.) When used with a guitar amp, the final result depends on how close the amp itself is to ‘breaking up’, as well as the output volume from the pedal; it’s this combination of pedal drive and a little amp drive that often produces the best results. Interestingly, I also tried the True Overdrive 1 to feed a clean-ish amp model plug-in running in Logic Pro and achieved very natural-sounding results in this way.

Ultimately there’s no one ‘correct’ guitar overdrive sound, so every drive pedal has to be judged on how well it suits your style. But if you’re looking for something that sounds and feels more like a pushed valve amplifier than the majority of overdrive pedals, it’s worth taking a closer look at the True Overdrive 1.