Morphagene is Make Noise’s attempt to take creative tape splicing and microsound exploration into the 21st century. Instead of actual tape, a 4GB MicroSD card is provided, which can store up to 32 reels. The audio recorded on to these reels is stereo, 48kHz and 32-bit — in other words, high quality. Indeed, it was sometimes slightly confusing trying to differentiate between incoming audio and playback, since the only balance control is the single SOS (Sound On Sound) knob. 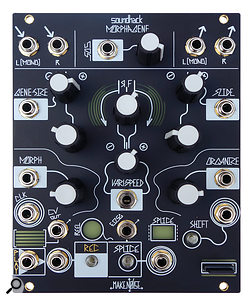 Size: 20HP. Current: +12V = 165mA, -12V = 20mA.While you aren’t forced to work in stereo, it makes a lot of sense to do so — or alternatively, to treat the virtual tape as two mono sources for separate processing later. First you’ll need to capture some audio, and for this you’ll need the manual and some practice memorising the various button combinations. To add a few degrees to the initial learning curve, the order of pressing buttons also affects the resulting functionality.

Strangely, there is no input level control. Therefore, an auto-levelling process is required, for which the button combination is Record and Shift. Be aware that pressing these buttons in the reverse order is the command to wipe the current splice.

To monitor the incoming audio exclusively, the SOS knob must be turned fully anti-clockwise. This is worth stressing because you can just as easily capture the module’s own playback, or any mix you care to make of source and playback. Starting out with no guidelines as to what might yield interesting results, I quickly realised that moving outside the modular and sampling anything and everything was the most sensible proposition.

A reel’s maximum recording time is 87 seconds, which can be divided into up to 100 splices — discrete chunks of looping audio. Having made an initial recording into the first splice, you’re free to overdub or create new splices until you hit the 87 second limit. At the most basic level, you could create a series of splices to be swapped around either manually or under CV control, inserting new ones at any time to work on smaller sections of material. And unlike real tape, it’s a doddle to seamlessly remove these later, effectively joining the tape up again. Fun though this all is, to appreciate the unique charms of the Morphagene it’s important to get to grips with Genes, Morphs and Slides.

The Gene (size) parameter initially feels to be working backwards, ie. in order to hear the current splice play all the way through, the knob needs to be fully anti-clockwise. As you turn, the looping Gene (analogous to grain, particle or granule of other granular processors) gets smaller and smaller. Related to this, the Slide parameter determines the playback start point within the Gene. Finally, Morph sets the degree of overlap for Genes, beginning with the playback of a single Gene with a slight gap around it. On reaching the first overlap, you begin to hear some of the distinctive granular phrasings that stutter and repeat. With a clock connected, you could sync the playing of these weird and funky stutters to the rest of your system.

If you keep turning, more Genes are introduced and upon reaching approximately the two o’clock point, four Genes overlap. Depending on the source material and Gene size, these overlaps can generate a remarkable variety of jittering, buzzing effects, sustained tones and noise. In the final part of the Morph knob’s travel, Genes are given random pitch and pan changes so even if you began with a mono recording, cool stereo effects spill forth.

On top of all this morphing action, playback speed and direction is set using the central vari-speed control. Both forwards and reverse playback are supported with transpositions of 12 semitones upwards and 26 in the opposite direction. At the knob’s central position, sample playback grinds to a halt. Furthermore, when using incoming clock, the Morph control now switches between two types of playback: Gene shift and timestretch. Essentially, Gene shift gives you clocked progression through Gene-sized chunks while timestretch turns vari-speed into a pure pitch control. The latter is ideal when you’ve isolated part of a sound that you wish to play or sequence. In such cases tracking doesn’t match the usual 1V/Oct standard, but it’s fun all the same and relatively easy to tune by ear with a step sequencer.

Colour is well-used throughout, making it easy to identify individual reels and splices. Whichever playback direction you choose, the appearance of green in the corresponding window means you have reached the original playback speed and pitch. Blue means you are an octave above and peach represents an octave below. At the same time, the opposing window’s colours describe the morphing and overlaps. For example, when the overlap is exactly half a Gene length the window turns orange.

Incidentally, if you’re thinking that 87 seconds doesn’t seem very long compared to, say, the granular shuffling of modules such as Bastl’s Grandpa, this isn’t actually a weakness. Indeed, it means the data can remain in RAM, providing fast and precise manipulation. If given longer samples to deal with, the controls would have a reduced accuracy when it comes to dialling in Slide, Morph and Gene values.

As mentioned, you can capture live playback direct from the module, including manipulations made manually or via CV. If you overdub into the current splice with the pitch transposed, the transposition will accumulate with successive loops. It’s even possible to navigate to other splices during recording and capture their audio, confident that you only record into the splice where you started. With techniques such as this, any audio source can quickly be transformed into trippy, weird ambience and unrecognisable alien tonality.

Alongside the extensive CV control, the module also provides an envelope follower output, plus a trigger output upon reaching the end of Gene or splice. With the former you can drive other modules using the Morphagene’s output level and, with the latter, you can synchronise other gear within your system to Gene playback.

In the Morphagene, Make Noise have fully reworked the earlier Phonogene module, making it hi-fi stereo and multi-reel. Since the audio is now written to card, this presents options for trimming, processing and generally messing with it in an audio editor — or importing existing material to be chopped up and reassembled in performance. I’ve enthused before about the joys of lo-fi granular synthesis, but this pristine take on it is something else entirely. Taken as a source of unusual textures and high-quality atmospherics, the Morphagene takes some beating. Of course, you rarely know what you’ll find at the outset, but if you relish the prospect of coaxing a chorus of Tuvan throat singers from a stray snippet of Rachmaninov, or humanely mincing a pod of capering dolphins, this module is for you!

Admittedly it’s not cheap. But I have a sneaking suspicion that it will be money well spent for sound designers, virtual tape splicers, Foley artists and sonic explorers everywhere. My only reservation lies with the auto-levelling process, which eliminates one of the controls I like to have when sampling/recording. Probably because I’m set in my ways, I tended to draft in other modules with attenuverters prior to the input stage as a workaround. Regardless of this, the Morphagene is one of the most impressive modules I’ve encountered in a very long time.