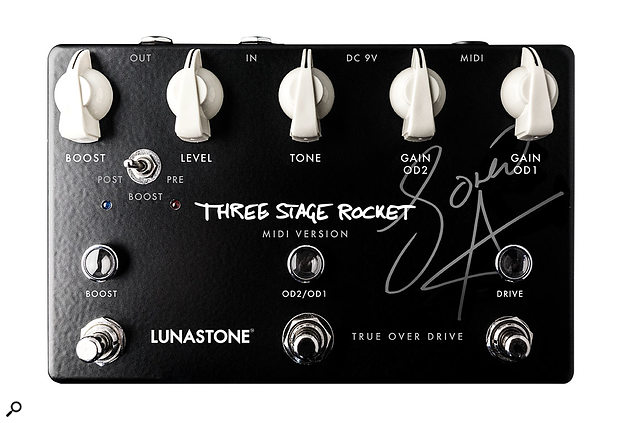 Guitar pedals range from the very basic ‘turn a knob’ variety to those with deep MIDI implementations and layers of hidden parameters. Lunastone’s Three Stage Rocket MIDI Version aims to strike a balance between those extremes — it marries a straightforward interface with an equally straightforward MIDI control system. Essentially, this larger-than-usual pedal houses three drive options, which are based around an overdrive section and an adjustable gain booster that can be switched pre or post the overdrive. Power comes from an external Boss-style DC PSU (not included) or a 9V battery.

There are three footswitches with large status LEDs, one toggle switch, and five ‘chicken-head’ pointer knobs. A closer look reveals that the three stages include a single overdrive stage that can be switched between two drive settings: there are separate gain controls to adjust the OD1 and OD2 drive, but only one set of tone and overall level controls. Boost has its own level control and the Pre/Post boost switch has status LEDs for both options. The middle footswitch selects OD2 while the right-hand switch selects OD1, and selecting either one deactivates the other. Boost has its own footswitch, though, so it can still be used when the overdrives are bypassed.

The drive section is based on Lunastone’s Big Fella circuit and uses cascaded gain stages, rather than clipping diodes, the aim being to create a more amp-like overdrive. This all sounds straightforward enough, so how does MIDI fit into all this? Well, rather than use MIDI for exotic parameter control, it is used to provide external control over the switch functions, including the Pre/Post switch. Rather than address each switch individually, MIDI Program Changes are used to call up a snapshot of the switch settings. To set this up, you turn the switches on or off as required, then send a MIDI Program Change message to the pedal while holding down one of the footswitches. An LED blinks if all is OK — at which point you’re done. You can set up different Program Changes for any permutation of switch settings, making it easy to integrate the pedal into a MIDI-controlled pedalboard setup.

It’s possible to change the default MIDI channel (1) by holding down two footswitches, then sending a Program Change on the desired channel; The pedal will then reset itself to that MIDI channel. Holding down all three switches initiates a factory reset.

It might seem that having only one volume control for the drive section invites problems, but the designer seems to have thought of that — OD1 is arranged so that more gain needs to be dialled in to achieve the same amount of dirt as from OD2, and as a result the level is fairly consistent as you switch between modest and higher gain settings. The Boost can also be used as a gain control to match up levels, of course, which is especially useful with MIDI switching, as you can have it apply to one drive setting but not the other.

Sonically, the pedal has an overdriven amp tone that’s more Pete Townshend than high-gain hard rock. It holds together really well on chords, and for single-note lines adds a nice, bluesy edge. There’s enough drive available here to get you into classic rock territory, especially if you add in some boost, and I had great results with both single-coil and humbucking pickups.

On the MIDI front the pedal does just as claimed, and when you change programs you’ll hear small relays doing their thing, meaning nothing unpleasant gets into the signal path. In conclusion, then, this is an elegant and practical pedal that could take the place of two or three different pedals, which goes a long way towards justifying the size! Finally, I should note that there’s also a non-MIDI version and while this is obviously slightly less versatile, it offers precisely the same sounds.