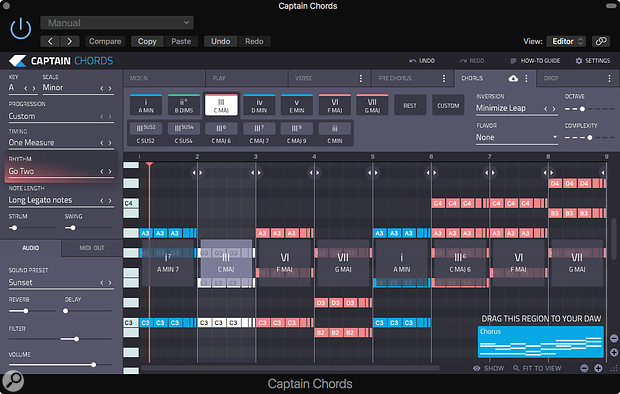 A new suite of plug‑ins aims to take the compositional donkey work out of pop and EDM songwriting.

Whether for good or for evil, software‑based compositional aids are becoming an established fact of life, and Mixed In Key’s Captain Plug‑ins suite is attracting a lot of attention. It’s a collection of plug‑ins that can work together to help you develop musical ideas in electronic, dance and pop genres.

For this review, I worked with the Mac OS version 2.0, which currently comprises four plug‑ins: Captain Chords, Captain Deep, Captain Melody and Captain Play. As the names suggest, Captain Chords will assist you with developing chord sequences for your song, while Deep adds a bass line and Melody, well, adds a suitable melody. Captain Play provides an additional tool for triggering a palette of key/scale‑specific chords with a single finger using either a MIDI keyboard or just your computer keyboard, and might be particularly useful to those working on a very compact (perhaps laptop‑only?) system.

At the time of writing, the Windows version includes only Captains Chords, Deep and Play, but Melody will follow as a free update when it’s ready. All purchasers will also get two further plug‑ins currently in development called Captain Hook and Captain Beat as further free additions when they’re available.

Purchase, installation and authorisation are all painless, but potential users should be aware of two technical elements of the current specification. First, in order to use the various plug‑ins to create new chord sequences and so on, your host computer has to be online, as processing is done in the cloud. Second, Mixed In Key make it very clear that, at present, only Logic Pro (which is where I did my own testing), FL Studio and Ableton Live are officially supported. The VST versions may work with other hosts, but such combinations are not currently official.

Captain Chords is the heart of the system. In essence, it lets you select a key/scale combination, and then offers you a palette of chords that fit the chosen key/scale. You can then use various tools to develop chord sequences for the different sections of your song. 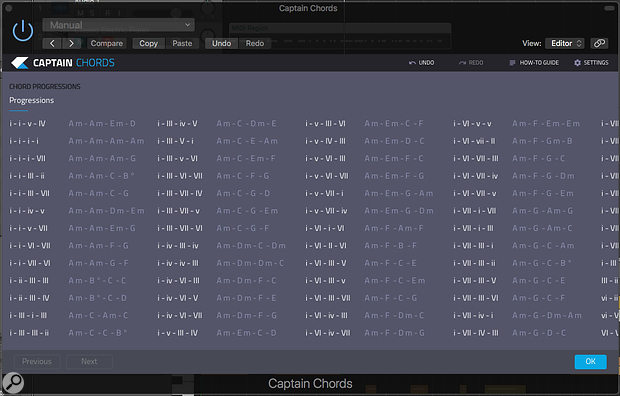 Captain Chords includes an extensive collection of four‑chord sequences to get you started.

Under the plug‑in’s title strip are six tabs: MIDI In, Play, Verse, Pre‑Chorus, Chorus and Drop. The last four of these allow you to create four different chord sequences (which can be in different keys if you like); the controls running down the left edge of the user interface can all be configured individually for each of the four song section tabs, and apply to the whole sequence within the selected tab.

The collection of chord options appropriate for the current key/scale combination is displayed as seven basic triad chords in the top row, plus a selection of harmonic variations in the bottom row. To build a chord sequence, you simply select the chord you require and then hit the ‘+’ symbol in the piano‑roll section of the display. Captain Chords can also do chord recognition from your MIDI keyboard as a means of adding chords to the sequence.

Other controls within the leftmost panel include access to an extensive collection of pop‑friendly, four‑chord preset progressions to explore. The Timing, Rhythm and Note Length options, all of which also feature a good collection of presets, then help you liven up the performance of the sequence from the ‘one sustained chord per bar’ default. Strum and Swing can also add some nice performance details. Do note, however, that all these settings apply across the whole song section, not just the currently selected chord within the sequence. 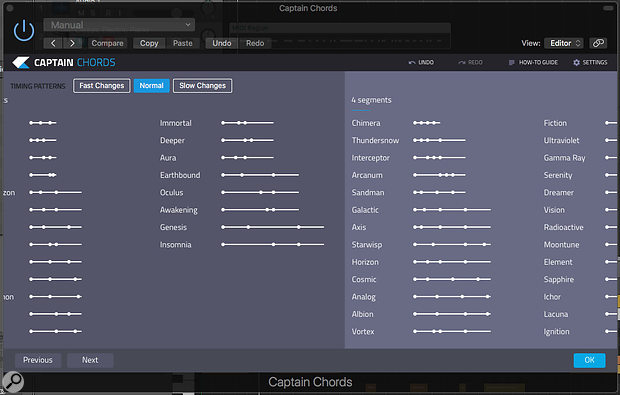 The Rhythms and (as shown here) Timing presets make it easy to customise your basic chord sequence.

There are some individual chord adjustments available, though. For example, you can split a chord that extends over a whole bar, to add additional chord changes, and adjust various settings for the Inversion, Octave, Flavor and Complexity of an individual chord within your sequence. These all help you add some individuality to the sequence. What you can’t do, at least at the moment, is any hands‑on MIDI editing within the piano‑roll‑style display. This is apparently a feature that’s in development.

It’s a doddle for anyone to go from zero to (almost) chord sequence hero in next to no time with Captain Chords. However, if you really want to get some dynamics and expression into the finished performance, the lack of manual editing means you need to use the MIDI drag‑and‑drop feature to transfer the sequence to a MIDI or instrument track in your DAW. Even adding some simple MIDI velocity variation then takes most progressions to another level. This also opens up a much wider world of sonic possibilities: Captain Chords’ internal sounds include a decent selection of EDM/pop‑friendly plucks, leads, keys and pads (plus a few others) that are great for auditioning your chord sequences, but most users will, I suspect, have better, more powerful, sound options amongst their virtual instrument collection.

The Captain Chords MIDI In tab simply allows you to play Captain Chords’ internal sounds from a MIDI keyboard or MIDI clip. The Play tab allows you to trigger full chords with a single finger, either from a MIDI keyboard or from your computer keyboard. For the latter, the rather neat graphical display makes it easy to see how the chords from your currently selected key/scale combination are mapped onto the computer’s keys. Options to access different chord voicings and octaves are included, and you can then improvise a chord sequence performance without need for a MIDI keyboard (or the skills required to play the full chords).

The space bar allows you to record this chord performance, and the plug‑in then offers you a MIDI clip to drag and drop to your host. For users who simply want to use the music theory built into Captain Chords, rather than its chord‑sequencing features, this is a useful addition. And, if that’s you, the Captain Play plug‑in provides this same ‘performance’ functionality in a separate plug‑in.

Once you have got something going with Captain Chords, Captains Deep and Melody can provide similar compositional assistance for your bass and melody lines, respectively. They need to be instantiated on separate tracks, and when opened, prompt you to link them with the existing instance of Captain Chords. Deep offers the same six‑tab options arranged above the piano‑roll area, and the four song section tabs follow the equivalent chord sequences configured in Captain Chords; if you make changes in Captain Chords, Deep’s bass line is automatically updated to reflect that. 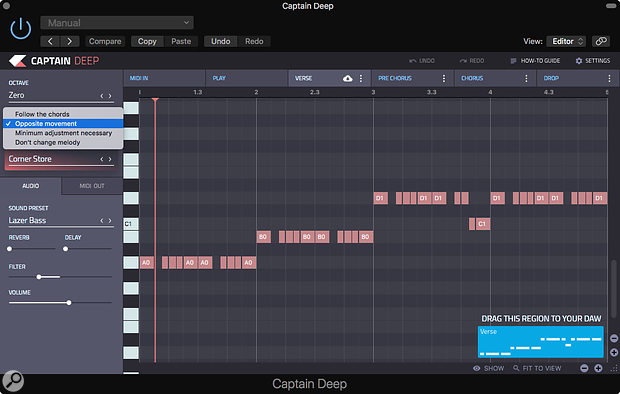 Captain Deep will add a bass line to your song that automatically follows the chord sequence within Captain Chords.

Deep’s leftmost panel again includes various options for configuring how the plug‑in will construct its suggested bass line based upon the Captain Chords chord sequence. It also has its own range of built‑in (and very solid) bass sounds. The options under the Rhythm tab are extensive and match those found within Captain Chords, so you can use identical rhythms in both, or get the bass doing something a little different. However, I found the options under Shape — which controls the notes used to construct the bass line — somewhat limited. All four options produce perfectly usable results but, whatever you do, the bass line is fairly static, sticking to a single note for each chord within the sequence. If you want something with a little more variety, you’ll need to drag the bass line onto a track and do some manual MIDI editing.

Captain Melody works in similar fashion, but offers much more variety for creating melodic lines than Deep does for bass lines. The same extensive Rhythm choices are present, but are joined by additional options for Tension, which defines the plug‑in’s note selection, and Pattern, which provides lots of different presets for the up/down ‘motion’ of the melody. These settings interact to give the user more scope to create some interesting melodic ideas. Whether it’s for instrumental melodies, or to act as a guide to a singer, it’s possible to get Captain Melody to conjure some perfectly usable melodic lines. Again, though, more experienced users will probably want to use them as starting points for manual MIDI editing. 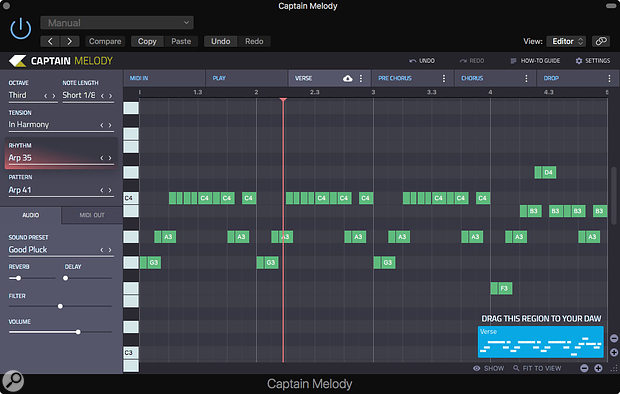 Captain Melody provides a range of options for creating melodic parts that fit your chord sequence.

So how well does all this assisted composition work in practice? At one level, very well indeed. Captain Chords offers a good range of chord types, keeps you harmonically ‘correct’ in your chord selections, has plenty of rhythmic options and is very easy to use. The way Deep and Melody slave to Chords, while also offering their own rhythmic and pitch choices, is very clever. I found it very easy (some might say too easy!) to generate viable pop‑ and dance‑friendly chord, bass and melody ideas. Given that’s the design brief, the Captain Plug‑ins most certainly do their job as advertised.

On the other hand, while a complete musical novice could easily use these plug‑ins to create a perfectly acceptable dance, EDM or pop track in no time at all, the danger might be that these compositions would soon begin to feel a little samey. Dragging the plug‑ins’ MIDI output into a track in your DAW and implementing some manual editing helps both to make the playing and composition a little more ‘human’, and to expand the sound palette, whether by using more interesting synth sounds or virtual ‘real’ instruments such as pianos, strings or guitars. Instrument choice in particular can do a lot to transform a Captain Plug‑ins composition from one genre to a completely different one.

While those with conventional musical backgrounds could certainly use the suite to rapidly generate a new idea or three, I suspect the package will particularly appeal to those coming at music production from a less traditional pathway. This might, for example, include DJs or vocalists who want to create credible musical beds for their own compositions, but don’t play a conventional instrument. That said, busy media composers will also find something to relieve the occasional bit of deadline stress here and commercial songwriters might simply enjoy (and be able to fully exploit) what’s on offer as an additional source of inspiration.

The need to be online when creating chord, bass or melody lines might deter some, but it does allow Mixed In Key to introduce improvements behind the scenes and also helps protect the software from piracy (which, in turn, keeps the price down). Equally, the limited number of DAW/sequencer hosts officially supported will mean that some people can’t take advantage of these plug‑ins, though Mixed In Key are working on expanding this list.

Given the modest asking price, the Captain Plug‑ins suite certainly represents good value for money, with additional plug‑ins being offered as free extras when released. At this price, it is accessible to almost anyone. There is, however, a 30‑day, money‑back, trial period available for a ‘no risk’ run‑out. Provided you are prepared to use the results as a starting point for your song and not as the finished product, I can easily see it benefiting producers without conventional musical skills, less experienced songwriters, and those who sometimes need to work up new ideas very quickly.

At the time of writing, the obvious alternative is Plug‑in Boutique’s Scaler. This uses a different approach, but also offers compositional assistance for building new chord sequences. It too is modestly priced and, at present, supports a wider range of hosts.

As a means for starting new pop, dance or EDM-style song ideas, the Captain plug-ins work as advertised. They might not be for everyone, but will certainly appeal to those looking for user-friendly songwriting support.