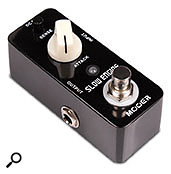 For the guitar player, stringing together separate pedals has parallels with modular synthesis. As with those experimental keyboard players, I’m always trying to coax different sounds out of my instrument, but I’ve never been overly impressed by do‑everything multi‑effects boxes. When playing live I like to rock out as much as the next guy, but in the studio I have a penchant for cinematic, ambient music that requires texture and delicacy. One of my favourite ways to create pad sounds is to add a slow attack to a shimmer reverb, and then maybe add a modulation effect such as chorus or a rotary speaker emuation. But while many multi‑effects units offer a slow‑attack module, finding a discrete pedal to do the job is not so easy — particularly since Boss discontinued their Slow Gear SG‑1 pedal. Clearly the effect is still popular, though, as used SG‑1 pedals are fetching in excess of £350$450. Of course, being an expat Yorkshireman, I wasn’t prepared to pay that much!

After a bit of searching, I came across a couple of options offering ostensibly the same effect. In the end, I plumped for the Mooer Slow Engine because of its compact format and metal casing. Being a compact pedal, it needs an external 9V DC power supply (there’s no battery compartment) but other than that it’s a very simple device to operate. There’s one small Sense control, used to set the trigger sensitivity, and a larger knob that adjusts fade‑in time. An LED tells you when the pedal is active — and that’s it.

Overall, the Slow Engine proved to have a low noise floor and a good range of attack time, from fast to a plausible bowed string or slow brass attack. But there are a couple of tricks to using the pedal effectively, as the input signal needs to fall below the trigger threshold if you want the next note to fade in. If you play a fast flurry of notes, the chances are that only the first note in the phrase will get the fade‑in treatment. Relaxing your fretting finger after playing a note to damp it helps preserve articulation, and setting the Sense control to fine‑tune the trigger level is important too.

Feed the output into a shimmer reverb and you have an instant ‘string machine’ sound; removing the attack transient from a guitar completely transforms its sound, creating the illusion of bowing. Adding a slow attack also gives bass guitar a hint of fretlessness (yes, I just made that word up...) while pianos can be transformed into bowed cello‑like sounds. In fact, any keyboard instrument which lacks its own envelope controls could make creative use of this pedal, and I wouldn’t be surprised to see this stompbox integrated not only into guitar pedalboards but also into some modular synth setups. It’s also worth pointing out that the typical street price appears to be significantly lower than the ‘official’ price we were given, so do check online.