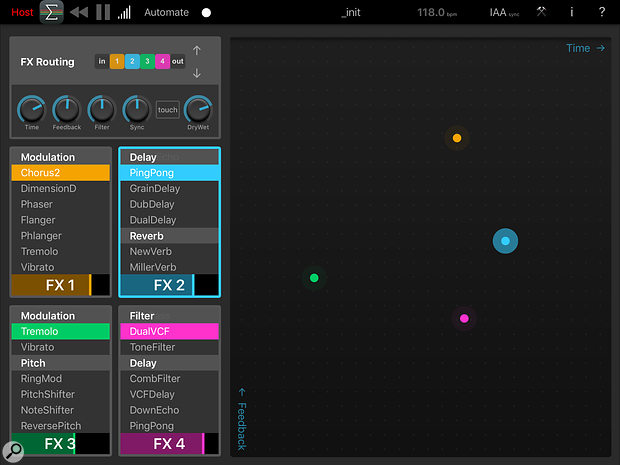 Those keen to make music on the move now have a huge selection of iOS music apps to choose from. That said, as on the desktop, some categories of the software environment are better stocked than others and, when it comes to effects, iOS is particularly well served. That doesn’t seem to stop developers offering us even more choice though. O-G-SUS (Oliver Greschke) is already well known amongst iOS musicians for the excellent Elastic Drums app, but his latest offering is an effects app: Elastic FX. 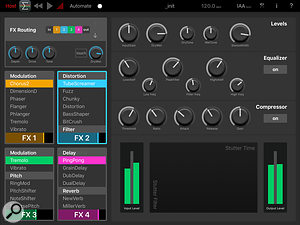 As well as the four user-configurable effects slots, there is also a master section with EQ, compression and a cool stutter effect with an X-Y controller.The app provides a multi-effects unit with four slots that can be filled from a selection of some 40 options, plus a master effects section. Effects categories cover familiar ground with modulation, distortion, pitch, filter, delay, reverb and a smattering of ‘others’, while the master section includes a neat three-band EQ, compression and a rather nice stutter effect. Real-time control of the effects is available through a well-implemented X-Y pad that supports tempo-sync’ed automation and MIDI Learn. As you can stack four individual effects, and the app offers various routing options through those four slots, it is possible to get pretty creative in terms of processing, even though the controls offered by each effect are fairly streamlined. The overall level of each effect can also be adjusted.

Perforator — a programable gate effect with plenty of creative potential.The app currently offers support of the IAA standard and Audiobus 3. Perhaps the only downside in the current specification is the lack of AU support. This might deter some potential purchasers but, with AU almost inevitably becoming the de-facto standard under iOS for getting apps to play nicely together, I suspect this is something that is only a matter of time in coming for any iOS music app that wishes to preserve its longevity. That this dominance is perhaps taking a little longer to establish itself than some (myself included) expected, is perhaps due to Apple’s regular moving of the iOS AU technical spec goalposts and the insanely narrow margins available for developers via the App Store. Watch this space.

For the moment though, both IAA and Audiobus 3 formats remain very popular and, in testing Elastic FX within Audiobus 3 and in AUM, it seemed to work very smoothly. What’s particularly impressive is that the design opts to do something essentially quite complex (chaining multiple effects together) but keeps the control set manageable within the iOS format. I think that’s a very sensible approach as, for a lot of musicians, their mobile music production system needs to be lean and mean as well as portable. In use, Elastic FX can do bread and butter effects with ease but, for those who like to take their audio processing to more creative places, it also has plenty to offer. Given the pedigree of Elastic Drums, long-standing iOS musicians won’t take much persuading to take a punt on Elastic FX. And, if AU support is eventually forthcoming, this would be even more of a no-brainer than it already is.