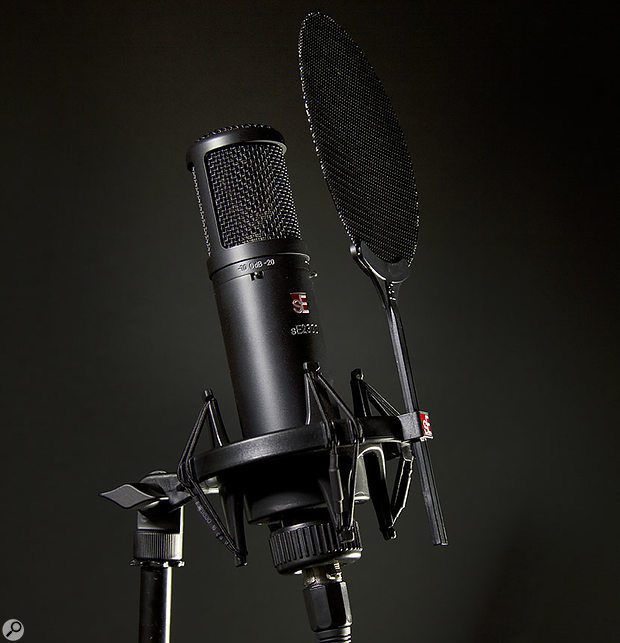 This update on a popular sE design offers improved specs at a familiar price.

sE’s sE2200a cardioid‑pattern capacitor mic has long been one of their most popular models, and this new sE2300 is essentially a multi‑pattern version of that microphone — as indeed was the sE2200a MkII that we reviewed back in May 2012. From what I can see, the sE2300 seems to be an update of that model, offering lower noise and greater sensitivity but a generally similar sonic signature and feature set. It is also specified as being 13g heavier and able to handle around 10dB more SPL.

Coupling a FET preamp with a shielded audio transformer, the side‑address sE2300 is intended as a studio all‑rounder with applications ranging from vocals to drums. It includes a switchable 10/20 dB pad and an 80/160 Hz low‑cut filter and, like the sE2200a MkII, has three switchable polar patterns: cardioid, omni and figure‑of‑eight. It ships in a foam‑lined cardboard box along with an sE Isolation Pack comprising a shockmount, metal mesh pop filter and thread adaptor — but no bag or storage pouch. Standard 48V phantom power is required for operation. With an overall weight of 611g, the mic measures 215mm in length and is 51mm in diameter — exactly the same as the sE2200a MkII. The standard of finish is stylish and tidy with a smooth black coating and inset sE logo.

At the heart of the microphone is a dual‑diaphragm, one‑inch, centre‑terminated capsule made in sE’s own factory in Shanghai. The mic covers the frequency range 20Hz to 20kHz (‑3dB) and like most mics of this type, has some lift in the presence region. However, most of the HF lift occurs around 10 to 12 kHz, giving roughly 4 to 5 dB of lift in cardioid and omni modes, which avoids giving excessive boost to the potentially harsh upper mids. In figure‑of‑eight mode the presence hump is focussed around 5kHz, peaking at around +4dB, though the general sound matching between the three patterns is pretty consistent. The sE2300 manages a sensitivity of 24mV/Pa (‑32.5dBV) and in conjunction with the pad can accommodate SPLs up to 146dB. Its A‑weighted noise figure is a healthy 9dBA.

On paper then the sE2300 is a well‑specified studio microphone — what really matters though is how it sounds in use. After trying all my usual tests, including acoustic guitar, electric guitar, percussion and vocals, I have to conclude that little seems to have changed on the tonal front since the 2200a MkII. It delivers a clean, solid vocal sound that is more airy than harsh and it also works well on acoustic guitar, requiring little in the way of EQ. I’d describe it as a subjectively natural, open sound but with some gentle flattery that includes a hint of warmth.

As the spec suggests, the mic has a low noise floor and it can accommodate very loud sounds without being compromised, as long as you bring in the appropriate pad setting when the going gets tough. If you already have an sE2200a MkII, then you shouldn’t feel you need to get rid of it to upgrade to this new model as the differences are fairly subtle, but on the other hand, the new sE2300 does have an improved spec, and its street price doesn’t seem to have changed much since the sE2200a MkII was launched in 2012, making it a good choice for anybody who’s in the market for an affordable multi‑pattern mic.

In this price range, look at mics from MXL, Aston and Sontronics, as well as Audix’s CX212B. If your budget will stretch a little further then include the Audio‑Technica AT4050.

A subtle update of the sE2200A MkII offering solid performance at a musician-friendly price.