Coldcut, comprising Matt Black and Jonathan More, are amongst the most high‑profile artists to have lent their credentials to Loopmasters' Artist Series sample libraries. Long‑time producers of sample‑based music, as well as founders of the Ninja Tune record label, these guys have certainly been around the block a few times, so when they start offering up snippets of their own sample collection for general consumption, you can't help but sit up and take notice. 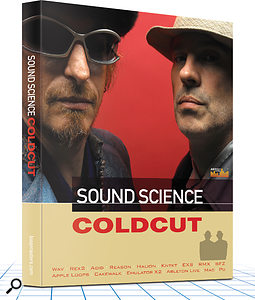 Fans of their work will doubtless be aware of the pair's jackdaw tendencies, so it's no surprise to find an initially bewildering constellation of stylistic influences, broadly pivoting around break‑based house. For example, while their beats take in a fair few rolling funky drum breaks and electronic kit sounds (including one of the meatiest synth kicks I've ever heard!), there are occasional forays into pure found‑sound beat‑creation and extreme sample mangling that take you by surprise. Basses, by the same token, are mostly shared between vintage‑sounding bass‑guitar popping and various electronic rippers, while still leaving a little room for the odd upright bass or fuzz frenzy. The remaining Music Loops and Vocals/SFX Loops folders continue on the same theme, allowing bubbles of techno, dub and doo‑wop to surface briefly from the stew of lazy‑sounding funk, razor‑sharp synth zwiddles, and jangling digits.

Lots of things are slightly off‑kilter in an appealing way, and although there are loads of traditional drum grooves, many also limp entertainingly, while somehow keeping their cool. Things like harp, timpani, and spaghetti‑western guitar come together in combinations that seem at once incongruous and inspired, and this is where Coldcut's forté lies, as I see it, because it's only when you start putting their sounds together that you realise that they're all somehow miraculously pursuing some kind of common cause: it's almost uncanny how well you can mix and match these loops and always end up with something that has merit.

All in all, then, there's a feast of fun for fans and non‑fans alike here, and despite the 390MB size the library delivers decent value for money, not least because the samples are provided at 16‑bit resolution. (24‑bit? You're having a laugh...) Mike Senior.

What Do Mastering Engineers Actually Do?
1 day 5 hours ago.