In many ways, the Onyx 820i is exactly what you'd expect from a Firewire Mackie mixer, except for one thing: it's Pro Tools compatible. 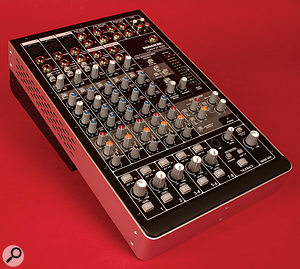 Mackie's Onyx Firewire mixer line has just gained a smaller sibling in the form of the 820i. However, the mixer itself is by no means the entire news here, as Mackie have taken the unprecedented step of writing their own software driver to allow their Onyx i-series range to work with Pro Tools M‑Powered software (which you must purchase separately). The i-series is also compatible with all the previously supported DAWs on both Mac and PC platforms.

Apparently, this was a unilateral move on Mackie's part, so rather than being given the necessary driver code by Digidesign, they're written their own. It's too early to say how Digidesign feel about this. Although it may result in the loss of some M‑Box sales, on the other hand it must surely help sell more copies of Pro Tools M‑Powered, which will, in turn, see even more young engineers being brought up with a familiarity with Pro Tools that they can carry over into their professional careers.

The first thing that struck me when getting the Onyx out of the box was how rugged and substantial it seemed for such a small mixer. It also features an internal power supply rather than the annoying adaptors that come with most small mixers these days.

The Onyx 820i follows the format of its larger cousins in offering both mono mic/line channels and stereo line‑only channels, along with one channel that can either function as a mono mic channel or a stereo line channel (3/4 in this case). Channels 1 and 2 are the dedicated mono channels and also benefit from insert points. Channels 5/6 and 7/8 are stereo line only, but they can also be used as though they were mono by only connecting to the left channel.

All the channels have variable input-gain trims and, unusually for a mixer of this size, all three channels with mic inputs have individual 48 Volt phantom power buttons, which is important if you want to use a mix of capacitor mics and ribbon mics, the latter not being appreciative of phantom power. These same channels also have low‑cut filter buttons, and channels 1 and 2 also have a switched high‑Z option on the line input, for the direct connection of guitars. Channel 3 has a +4/‑10dB sensitivity switch. Two LEDs are fitted to each channel to show ‑20dB and overload signal levels.

There are no surprises in the EQ section, which follows the established Onyx formula. The dedicated mono channels have a three‑band arrangement with a sweepable mid (100Hz to 8kHz), channel 3/4 has two fixed-frequency mids (400Hz and 2.5kHz) and the stereo line channels have a straightforward three‑band EQ with the mid frequency fixed at 2.5KHz. In all cases, the high‑ and low‑shelving EQs are set at 80Hz and 12kHz and the gain range on all the EQ sections is +/‑15dB. 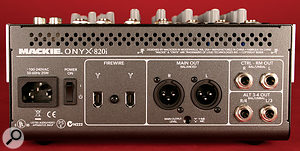 The rear of the Onyx 820i is home to the unit's two Firewire sockets, XLR duplicates of the main outputs and the Control Room and Alt outputs.Each channel also features two aux sends, either of which can be switched to pre‑fader or post‑fader on a global basis, via a pair of switches in the master section. All the channels have a pan control, which functions as a balance control for the stereo channels, and all the channel faders are on rotary controls rather than on sliders.

Mute and solo buttons are fitted to every channel, and the mute buttons can actually route the signal directly to an additional pair of output buses, enabling the Onyx to double up as a four-bus mixer if required. This route‑or‑mute option is an old Mackie trick designed to get the maximum usage out of a fixed number of buttons, and is a very welcome and practical addition.

At the rear of the unit are jacks for the Alt outputs, along with the Control Room out sockets, the Firewire connectors and the two XLR main outputs.

On a mixer this small, the master section is almost as large as the channel section. It includes two jacks for the aux sends, four for the two stereo aux returns and two more for the master outputs (which are also available as XLRs on the rear panel). These are all TRS sockets, wired for balanced or unbalanced operation. Additionally, two pairs of RCA Phonos (unbalanced) handle the Tape In and Out connections for two‑track recording and playback using any suitable external device. Separate level controls are provided for the main and headphone outputs, the phones connection being a stereo TRS socket.

Along with all this, the 820i also includes some fairly sophisticated routing options, allowing you to monitor different sources and set up foldback mixes. There's also a talkback mic with routing to the phones or Aux 1/2. This mic has its own level control and non‑latching Talk button. A rotary master fader and set of 12‑segment meters with flashing 'Rude Solo' LED completes the complement of controls. 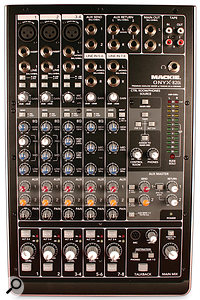 Despite its size, Mackie have managed to squeeze a lot of controls onto the Onyx's 365 x 230mm front panel.

After installing the Mackie Universal Audio Driver, I first checked the Onyx 820i using Logic Pro 9 running on a Mac. Routing from the mixer using the clearly marked front‑panel Firewire buttons proved very simple, and within moments I had some existing recordings playing back via the monitor section of the Onyx. I made some new recordings using the Onyx input channels, and again, no problems were encountered. The audio quality of the Onyx is everything we've come to expect from this mixer range, with a particularly musical EQ section and a transparent-sounding mic preamp that adds just a hint of flattery.

My initial experience with Pro Tools M‑Powered was a little fraught, as I had trouble getting Pro Tools to install on my system. It turned out that some odd Pro Tools files had been left there from an earlier M‑Box‑related adventure and the uninstaller hadn't removed them all, so I had to locate them and evict them by hand, after which Pro Tools M‑Powered 8 installed fine. This version of Pro Tools ran perfectly with my own M‑Audio Profire 2626 interface, but when I disconnected this and instead connected the Onyx, Pro Tools insisted there was no compatible hardware. A call to Mackie revealed that the Onyx 'looks like' a Profire 2626 as far as Pro Tools is concerned, so there was a conflict between the Onyx driver and my existing Profire 2626 software. I must stress, however, that this review system was an early version and Mackie are hoping to solve that problem before the official release date or, at worst, shortly afterwards. To continue testing the current version, I uninstalled my Profire 2626 software and Pro Tools loaded up without a hitch.

Once a new session has been set up in Pro Tools, it is necessary to go to the Setup / I/O page and click 'default' for the inputs and outputs, so that the software can access the eight Onyx inputs and two Onyx outputs. There's no hardware setup control panel for the Onyx, so sample rate and buffer size have to be set in the menu that appears when you create a new session. Once I'd completed these steps, the Onyx worked with Pro Tools M‑Powered just as it would with any other DAW software, so it would appear that the Mackie driver does exactly as claimed.

Mackie's Current i‑series mixers offer all the benefits of a traditional Mackie Onyx hardware mixer, while also being able to function as a multi-channel audio interface. The addition of Pro Tools M‑Powered compatibility is obviously a big step for Mackie, although at this point I'm not privy to Avid's thoughts on the situation. Mackie plan to make their Universal driver available as a download, and it will be compatible with any Onyx i‑series mixer but not with previous Onyx Firewire models. If all goes to plan, the Universal driver could be beneficial to both Mackie and Digidesign, but most importantly, it will benefit the end user who prefers to work with a mixer but also needs to run Pro Tools.

Mackie are the first third‑party company to offer Pro Tools compatibility, so currently the only other alternative is to buy qualifying M‑Audio hardware. However, there are other Firewire mixers on the market for around the same price, such as the Phonic Helix and the Alesis Multimix.

The Onyx range's raison d'être has always been Firewire, and the 820i offers particularly versatile interfacing options. Two Firewire 400 ports are provided on the rear of the mixer to allow daisy‑chaining, and once the driver software has been installed, the mixer shows up as an audio interface within your DAW software. The mixer sends several different signals along the Firewire cable to the DAW, specifically the individual channel signals (pre‑fader and switchable pre‑ or post‑EQ) and the stereo mix, though you can opt to send Aux 1 and Aux 2 in place of channel 5/6 if preferred.

Essentially, up to six independent sources may be routed to the DAW via Firewire, in addition to the stereo mix. Although the manual states that it is possible to modify the mixer circuit board to send the Firewire signals post‑fader, I couldn't find any detailed instructions on how to do this. In general though, the default pre‑fader configuration makes more sense, as it allows you to adjust the monitor mix without affecting the levels being sent to the DAW. If you need to adjust these further, you can still use the channel input-gain trims.

The ability to work with ProTools M‑Powered will be welcomed by many users. In other respects, the 820i comes as highly recommended as the existing larger Onyx i‑series mixers.