This recent addition to Nine Volt Audio's BPM Flex series provides around 900MB of loop content in Acidised WAV, REX, Refill, Stylus RMX and Apple Loops formats. The material is subdivided into around 50 loop 'suites', each containing a number of musical variations using the same sound character. Keys and chords are usefully documented in the file names, as are nominal bpm values, although Nine Volt Audio's thoughtful sample editing makes all the loops usable across almost any tempo: you typically have to more than halve the tempo before any gaps start to appear in the REX‑format samples — which is something you certainly can't say for many libraries. 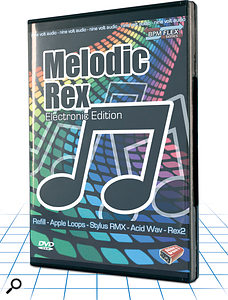 As the title implies, the sounds are predominantly synthetic, with the occasional electric bass or Hammond cameo. All of them have a pronounced rhythmic drive and follow strongly tonal harmonic patterns, using lots of tempo‑sync'ed filtering, modulation effects and ping‑pong delays to increase complexity and sonic expansiveness. Many of the loops are reminiscent of arpeggiators, so much so that Arpeggiator REX might have been a more representative title! To be fair, though, Nine Volt Audio go a long way beyond simple 'press start and stand back' arpeggiations, and include loads of nice internal little melodic riffs and counter‑melodies to keep the ear amused. I also very much like the way the designers have put a bit of ebb and flow into the phrasing in many cases, which helps the momentum drive through the boundary of each loop iteration.

In general, the emphasis on grid‑based rhythms and major keys gives much of the material the kind of airy, optimistic feel that brings to mind over‑exposed television adverts involving lots of slow‑motion CGI, freshly pressed families and digitally rendered butterflies. What you won't be able to surmise from the online audio demos, though, is how fantastically usable this library is — which is a godsend, given that most people are likely to think of adding this kind of material only later in a production, when other more important musical parts have already locked many musical variables in place.

Not only does the REX format give you any tempo you like, but because the harmonies used are all annotated, you can swiftly mix and match sections of different loops in each suite to generate something that fits in with just about anything. Then there's the way that, in some of the suites, each musical variation has been split into two sonic layers (one spikier and more rhythmic, the other smoother and often with reverse‑envelope effects), which gives more scope for arrangement build. That's before you even start mixing and matching between loops, an activity that made it surprisingly easy for me to forget to stop for lunch!

In short, this library is elegantly simple in purpose and brilliant in execution. I'll be keeping it close at hand. Mike Senior