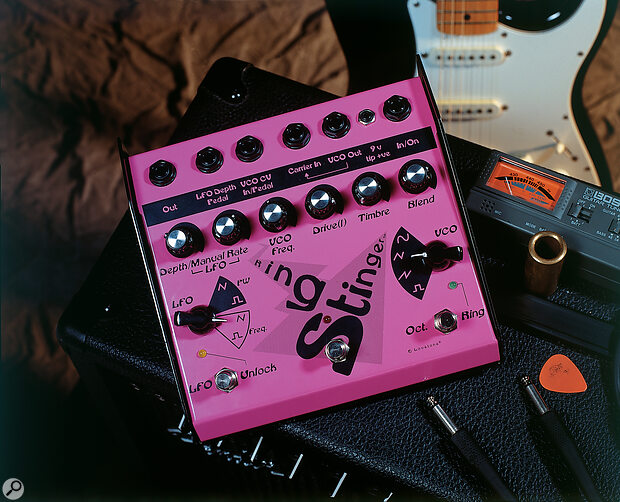 The latest addition to Lovetone's range of bizarrely named stomp‑boxes is a surprisingly well‑specified ring modulator. Will it sting Derek Johnson & Debbie Poyser into musical action?

This '70s‑styled analogue pedal processor, boasting a lipstick‑pink paint‑job that wouldn't be out of place in Barbie's Recording Studio, comes from those interesting people at Lovetone. As the name implies, the RingStinger has the synthesis staple of ring modulation as its core process, and though it looks designed for a guitarist's pedalboard, it's equally suitable — we'd say more suitable — for processing synths. In common with the rest of the Lovetone range, what you see is what you get: there's no MIDI, no user memories, and no 'presets' to give you an opportunity to cheat!

For the uninitiated, a ring modulator takes two input signals and both subtracts the frequency of one from the other and adds their frequencies together. What comes out is a mixture of the "sum and difference" of the two signals, with no original signal present. So, for example, a 500Hz and a 750Hz sine wave would produce 1250Hz and 250Hz sum and difference frequencies.

In order to make use of a ring modulator, then, you need two signals, known as the Carrier and the Modulator. The RingStinger, however, is designed to be used with guitars, monosynths, and other single‑output devices. So where does the other signal come from? Lovetone have taken care of this by including an onboard VCO to produce the carrier; the main input is the modulator. However, there's also a Carrier In socket which lets you override the VCO and send in your own carrier instead, still to be modulated by the main input. The RingStinger also allows the unprocessed source signal to be mixed back in with the ring‑modulated result, using the 'Blend' knob.

For even more flexibility, the RingStinger also lets you modulate the carrier itself, with an onboard Low Frequency Oscillator, a volume pedal, an external Control Voltage source such as the CV output from an analogue synth, or with light. The Stinger's 'light jack' allows modulation by moving your hand (or other body part) above it to reduce or increase the amount of light hitting the sensor inside the jack; this can also control LFO depth in real time, as can a volume pedal.

If you're using the onboard VCO to generate a carrier you have to select its waveform (sine, triangle, sawtooth and square waves are on offer) with a pointer switch. A similar switch determines whether the LFO produces triangle or square waves and whether these modulate the VCO's pulse width or frequency. The remaining controls comprise two knobs for setting LFO depth and rate, and knobs for VCO Frequency, Drive, Timbre, and Blend. There are no value calibrations around the knobs, so tweaking is advised! All that remains are three sturdy metal footswitches across the bottom of the unit, which enable and disable the LFO, bypass the processed signal, and switch between the unit's two operating modes, Ring Mod and Octave (see 'Here Comes The Fuzz' box for more on the latter).

Working methodically with the RingStinger can be difficult: its output always depends on the level and harmonic content of its input, and even when you're using the VCO without modulation the output will change with every new note. The effects of the Stinger's many tweaking options are difficult to predict, and harder still to describe. If you know what ring modulation sounds like, you know what to expect from the RingStinger at its most basic, but it has the capability to go well beyond this.

The ring modulation process can generate complex sounds containing harmonics the original signals didn't have, and be very useful for creating clangorous bell‑like timbres. As you'd expect, using a VCO sine wave creates the most predictable results, but different textures are available from the other waveforms: the triangle wave yields a softer result, the sawtooth is sharper, and the square wave on low VCO frequency settings produces a more dynamic, driving, chopped effect. Higher VCO frequency settings produce more atonal results with all the waveforms — imagine a short‑wave radio not quite tuned in!

The Drive control sets the input level to the ring modulation itself. More drive means more distortion. Purer sounds are produced with lower Drive settings, but if you set Drive too low you won't hear any output at all; in fact, a make‑up gain control, to increase the Stinger's output level when using low Drive settings, would be handy. The Timbre control essentially alters tone, from "low pass through fizzy and scooped to a pokey mid boost". In other words, more unpredictability! One way to keep the result more musical is to mix a lot of the original signal back in using the Blend knob.

The RingStinger becomes even more chaotic — but in a fairly logical way — if you modulate the VCO. Using the onboard LFO for modulation it's easy to hear what PWM or FM are doing to a signal: FM produces siren‑like effects with both triangle and square waves, while the pulsewidth options create a rich, pulsing feel with triangle and a gated effect with square waves. You can get a good feel for what the LFO does to the VCO by monitoring the VCO Out socket (note that this is louder than the main output) while tweaking the LFO controls. Connecting an external device, such as a volume pedal, a CV output from an analogue synth or the supplied light jack, to the VCO/CV In socket allows the VCO frequency to be modulated in a more extemporaneous manner, while playing. The fact that you don't know what frequencies the VCO is generating means that results are rather unpredictable, though.

One bonus of connecting an analogue synth or MIDI‑CV converter to the Stinger is that its VCO can be played as a sound source in its own right, since Lovetone have provided it with an output. However, as the VCO/CV In socket is calibrated at less than the 1V/octave standard used by many analogue synths and MIDI‑to‑CV converters, approximately 25 semitones of keyboard span is required to play an octave of Stinger VCO frequency. In addition, low notes from an interfaced keyboard produce high VCO values, and vice versa. This allows for correct sweep when a volume pedal is connected. The light jack also allows the VCO to be played theremin‑style, though this is not as predictable or — when the Stinger is floor‑mounted — as immediately usable as the D‑Beam light controller found on recent Roland products. It's a fun option, but slightly gimmicky.

One last way of using the VCO's output and the Carrier In jack is as an insert point, allowing the Stinger's VCO to be treated externally with any effect you like, before being modulated by its audio input.

Of course, you don't have to use the onboard VCO to provide a carrier at all: inserting a lead into the VCO CV input jack disables the VCO and lets you use another signal source. When we tried this out, all seemed to function as expected (after a little tweaking of the external carrier's output level and the Stinger controls), and we got some interesting results. The RingStinger allowed us to use a couple of our analogue synths in a way that we weren't able to before, with one providing the carrier and one the modulator. Neither of our synths has an audio input, so the Stinger provided a central point for mixing and modulating their outputs, producing some great sounds we couldn't have made in any other way. Of course, the Stinger could facilitate interplay between any two sound sources, such as the outputs of a sampler, digital synth or off‑tape audio. Anyone who's wanted to dabble with modular synthesis on a budget might find just this aspect of the RingStinger worth the investment.

The RingStinger could be seen as quite a brave move for Lovetone, given that the received wisdom says ring modulation can be hard to use in a 'musical' (ie. tuneful) way. However, they've pulled it off, making a processor that defies categorisation but has a wide range of sound‑designing applications, courtesy of the almost limitless permutations of controls, inputs, and modulation routings. This is a real suck‑it‑and‑see kind of unit, which can keep you occupied for ages and which improves with familiarity. There are no memories, of course, but interesting effects could easily be sampled.

The RingStinger should appeal to anyone into synthesis and the nature of sound, those looking for a source of sci‑fi soundscapes, and those producing noisy, atonal, industrial tracks, though it can be coaxed into making impressive sounds that most modern dance or ambient musicians could use — especially if both carrier and modulator are supplied externally, the method we preferred. We'd say the RingStinger will get stretched to its full in the studio rather than on stage, but wherever it's used it will create unique sounds. And if they're a bit too unique for you, Lovetone offer a money‑back guarantee!

Physically, the RingStinger is very sturdy, packed into a solid metal case with non‑slip rubber matting underneath. The controls appear similarly bullet‑proof. Lovetone have designed the Stinger for powering by a 9V battery or a PSU (not included). Batteries drain quickly, and the VCO output changes as voltage drops, so a power supply is certainly the best option. However, if you need to use a battery, installing one is amazingly straightforward, since the top panel of the unit simply hinges up.

The RingStinger makes use of another property of ring modulation: the fact that feeding in one signal split to both carrier and modulator inputs creates an output one octave higher than the input signal (the difference between the two inputs is zero, while the sum is double the original frequency — an octave higher). This second mode is called 'Octave'. However, the way the RingStinger is designed means that you don't get a pure octaving but an 'octave fuzz' effect. Lovetone call this 'germanium' fuzz, referring to the sound produced by the germanium diodes in their circuit, as used in classic pedals of the '60s.

In Octave mode, the RingStinger's VCO is disabled, and the LFO outputs only a fixed‑level square wave, with the Depth control having no effect. In practice, though, we could hear no LFO activity at all. Tweaking the Drive and Timbre controls adds more distortion, resulting in some fancy fuzz effects which respond to the level or attack of the incoming signal. There's a tendency to stridency, but when kept under control the effect is biting and can easily cut through a busy mix. You wouldn't buy the RingStinger just to use as a fuzz box, but it's nice to have the extra scope.

It won't be to everyone's taste, but if you've the money to spare, the RingStinger is an absorbing box of tricks for the creative musician.