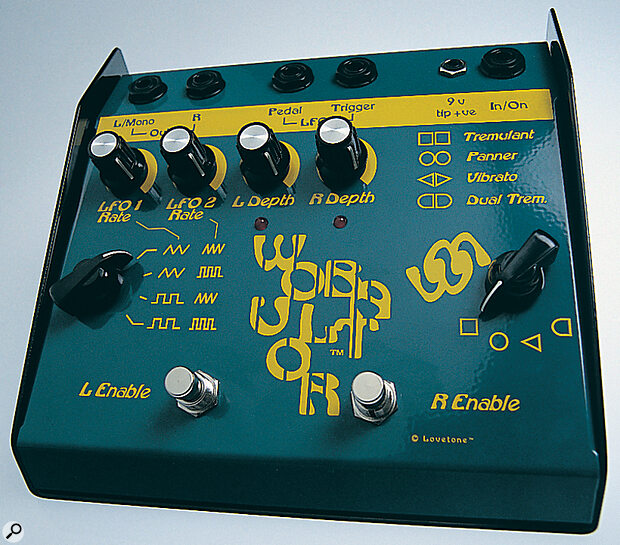 Despite the huge technological advances over the last two decades, it's surprising how many SOS gear lists have people still swearing by vintage effects boxes such as the Electro Harmonix Electric Mistress Flanger, probably because they have a character often lacking in modern designs.

Lovetone were inspired by the classic sounds of yesteryear, but are firmly rooted to today's technology, which tends to be quieter and more reliable. Under review here is the latest model in their range — the Wobulator, which provides a twin‑oscillator tremolo/vibrato with extensive modulation possibilities.

The Wobulator is hand‑built in the UK and has an all‑metal casing. It's powered by PP3 batteries or a 9V PSU (not supplied). Along the top of the front panel are a pair of output sockets (L/Mono and Right), a pair labelled Pedal and Trigger (we'll come back to these later), a PSU socket, and a Mono input, which also powers up the unit when a jack plug is inserted. All sockets are quarter‑inch jacks, apart from the 3.5mm PSU socket.

In essence, the Wobulator provides stereo movement in a foot‑controlled unit, using a rotary LFO1 rate control, with independent Depth for left and right channels. Twin footswitches provide individual on/off for the effect on both left and right channels, and these are usefully spaced so that you can stomp on them both together. There are four switched modes: Tremulant provides the classic in‑phase tremolo effect, although the left channel is low‑pass filtered, while the right is high‑pass filtered, giving a subtle stereo spread as well; Panner provides the classic auto‑pan side‑to‑side sweep, moving both channels in anti‑phase; Vibrato operates like Tremulant, but in anti‑phase, so the different filtering in each channel creates swirling harmonic effects; Dual Trem is the final option, and this brings into play a second LFO for independent speed control of the right channel. Further options are provided by a four‑position waveform switch for the LFOs, giving either a triangle or square wave, and the same option for the second LFO in Dual Trem mode.

The Pedal socket allows a footpedal (or switch) to be used for real‑time LFO1 speed control (although you'll need a high‑impedance pedal), and can also switch between full speed and front‑panel speed. The final socket, marked Trigger, allows the LFO1 waveform to be held when any voltage greater than +0.7 volts is applied, and re‑triggered on its removal. This lets you sync the effect to an external track. Because the controls all interact, a huge variety of amplitude effects is on offer, and the filtering options supply a lot of harmonic movement as well. I suspect that the more off‑the‑wall effects will be found via the external triggering mode, since this provides many possibilities for dramatic stereo gating effects.

Lovetone units seem to be attracting a cult following for their ability to provide sounds that are rather different from the rest, and which give a huge amount of control in an immediate and obvious way. Their impressive client list includes the likes of Blur, Bootsy Collins, Coldcut, Nellee Hooper, Steve Levine, Mansun, Oasis and the Stone Roses. Producers and engineers have taken to them for outboard use, due to their idiosyncratic approach and excellent audio quality. All Lovetone products are only available via mail order, are built to order in small batches, and have a money‑back guarantee. If you want to extend your stereo panorama, you'd better get moving. Martin Walker