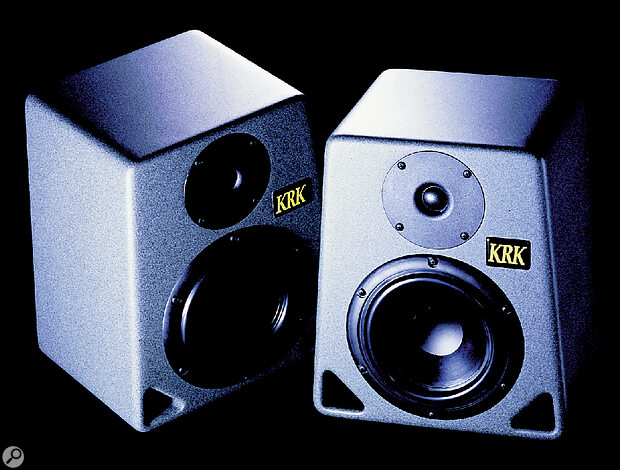 Have KRK managed to preserve their family sound at this new low price point? Paul White gets ready to Rok...

KRK's monitors are no strangers to the pages of SOS, but this is the first time the company have built a nearfield monitor priced to appeal to the broad spectrum of home studio owners.

The majority of KRK monitors feature straw‑coloured, woven Kevlar speaker cones and a distinctive inverse‑dome tweeter, but on the RoKit these have been replaced by more conventionally equipped drivers. The tweeter, which is recessed to be flush with the front baffle, is around one inch in diameter and is fitted with a fairly stiff, doped, silk fabric dome, whereas the six‑inch bass/mid‑range unit utilises a polyvinyl cone set in a compliant roll surround. Unusually, the centre dust‑cap is concave, and a contoured ring is fitted around the outer edge of the driver to provide a smooth transition to the baffle. Six cross‑head screws hold the driver in place.

Even though the RoKits cost significantly less than other KRK models, the immediately recognisable tapered 'Stargate' shape has been retained, as has the grey textured‑paint finish and the generously radiused corners. Radiused edges help reduce cabinet‑edge diffraction, while the trapezoid cabinet shape reduces the severity of standing waves inside the cabinet by eliminating one pair of parallel surfaces. Considering their small size, the MDF cabinet construction is surprisingly sturdy and rigid, with a flawless finish, but the weight is still fairly low, at only 29lbs per pair. The bass ports are visible as two triangular openings at the base of the baffle, and these extend back into the case to provide the cabinet's reflex tuning at low frequencies. The port openings are also radiused.

With a nominal impedance of 8Ω, the RoKits are rated at a nominal 75W each, and with an efficiency of 91dB for 1W at 1 metre, they can produce SPLs of up to 104dB. Magnetic driver shielding is fitted as standard, enabling the speakers to be used near TV and computer monitors without compromising picture quality. The passive crossover operates at 1.5kHz, and connection to the speakers is via a pair of red and black brass‑cored terminals designed to accept spade connectors, bare wires or banana plugs; no provision is made for bi‑wiring. The overall cabinet size is a modest 12.5 x 10.5 x 8 inches, and they can be used directly behind a console without having a significant effect on the engineer's sightline. A further advantage of the tapered shape is that users are less likely to try to use these monitors on their sides — a practice that invariably compromises a speaker's dispersion in the horizontal plane, resulting in a very narrow sweet spot.

As usual, I employed my standard small monitor test setup, comprising a Marantz CD52 bitstream CD player and an AVI integrated amplifier capable of delivering around 60W per channel. Initial impressions confirmed that the RoKits follow the KRK family tradition of producing a sound just slightly on the bright side of neutral, but not excessively so. The supplied frequency response graph shows that the RoKits have a response from just below 70Hz to well in excess of 20kHz, +/‑2dB, and there's a very gentle high‑end rise centred around 10kHz or so, which probably accounts for the impression of brightness. The sound is certainly very open and detailed, making it easy to home in on the individual elements of a mix, and the bass end, although not as extended as on some larger monitors, goes deep enough to do justice to most material without causing problems in acoustically untreated rooms. Kick drums remain punchy, with a nice smack, but organ pedal notes or the lower octaves of TR909 kicks are likely to slip under the net. The stereo imaging is good, and it's possible to move quite a way off‑axis without compromising the sound, which is always a good sign.

Studio monitors have to sound good at both high and low listening levels, and though the bass seems quite light at very low levels, this requirement is largely fulfilled. At mid to high listening levels, the bass firms up and the sound stays clean and open until you crank up the level to a point where it starts to get uncomfortable for nearfield work. At this point the top end becomes a little raggy and aggressive, but that's to be expected. At all sensible monitoring levels, the sound stays clean, well‑defined, and only slightly brighter than from the ATCs that I use as my standard reference. Admittedly the sound isn't quite so smooth and well integrated as from my reference monitors, but then the RoKits cost less than the VAT on my ATC SCM20s!

When I first heard the RoKits, I had no idea what they cost, and having had experience of other speakers in the KRK range, I assumed that they would cost upwards of £350. As it turns out, my guess was over by around £100, which makes the RoKits a very attractive proposition for the smaller studio looking for a revealing set of nearfield monitors.

The RoKits are better engineered than many competing speakers in this price range, though obviously the drivers are less expensive than those used in KRK's more up‑market models. Even so, the designers have still managed to retain the family sound. The detailed and revealing character of the RoKits makes them ideal for monitoring in smaller studios, where the room acoustic might produce misleading results from larger monitors. The lack of bass extension might be perceived as a problem by those mixing dance music, but realistically the accurate monitoring of deep bass requires a large, acoustically treated control room.

A sensibly priced nearfield monitor that delivers a good standard of performance in a compact package.