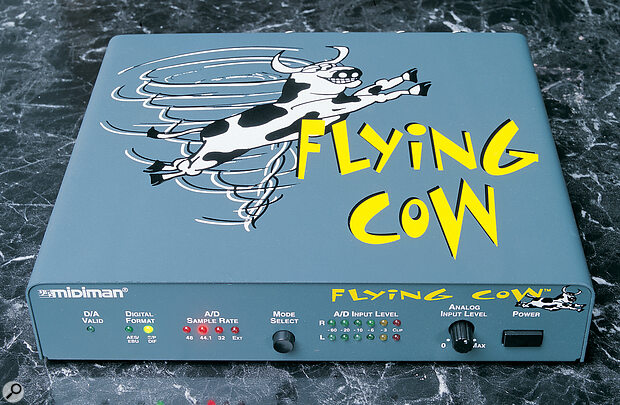 Many musicians now have digital audio in their studios, so Midiman have decided to help them interface cleanly to the outside world, with the bizarrely named Flying Cow. Martin Walker thinks it cud be a winner...

I'm not quite sure why Midiman called this the Flying Cow. Certainly it stands on four feet, has an input end and an output end, and you can use it to milk every last drop of quality from your audio signals, but I suspect that the real reason may be somewhat different. Fortunately it's not a load of old bullocks, and should prove an extremely useful purchase for many people, since it provides high‑quality 20‑bit A/D and D/A converters on the analogue side, along with both AES/EBU and S/PDIF digital Ins and Outs for digital transfers. It also features all those little touches that tend to disappear when you opt for a completely computer‑based system — there are hardware A/D level meters and an LED readout of sample rate.

The target purchaser is likely to be anyone who wants to improve the quality of an existing digital audio setup. A lot of people suffer (unfortunately not in silence) with audio interference inside their computers. In the last few months, more PCI soundcards with external converters have been appearing, for both Mac and PC use, but that doesn't help those who already rely on indifferent internal converters, and who would like to improve their audio fidelity. If you have a digital output available on your soundcard, attaching this to the digital input of the Flying Cow and using its D/A converter should boost your monitoring quality considerably.

For digital recording, unless you need simultaneous multitrack recording facilities (for live ensemble work, or when recording drums) you may only really need one high‑quality A/D converter. You can then route its digital output through to the digital input of a soundcard inside your computer. Once in digital form your music can stay that way until it is mastered to CD, since it is possible for the rest of the audio chain to remain in the digital domain. This means that the A/D converter is normally the weakest link in the chain, as its quality will determine what ends up on your hard disk.

In the twilight world of mixed analogue and digital setups, handfuls of D/A converters may be used to attach external analogue effects. However, for final monitoring of your digital data before burning a CD, you only need a single high‑quality D/A converter, and you will be using this to determine the balance of your final mix. Professional studios may pay thousands of pounds for the best converters to use in these two key roles. Even if you're currently using the converters from your DAT mastering machine for external recording and monitoring of digital signals, so many advances have been made in converter design over the last few years that you may well find that these converters from Midiman sound a bit better, and maybe several bits better.

For the benefit of the generally reserved UK reader, I must stress that although the top panel of the Flying Cow does feature a large graphic of the aforementioned animal performing aerial activities, once you place the free‑standing desktop case (half‑rack width) alongside other equipment, this graphic is likely to disappear. The front panel is comparatively restrained, with only a 1‑inch cow in evidence, and thus should keep your sophisticated studio image intact. From right to left, the front panel also has a power switch (for the wall‑wart supply, alas), an Analog (sic) Input Level control (for setting up recorded levels), and a pair of A/D input level meters (Left and Right), each with six LEDs indicating ‑60dB (signal present), ‑20dB, ‑10dB, ‑6dB, ‑3dB, and Clip. Next there's a Mode Select switch, which, when repeatedly pressed, will cycle the unit through all available sample rates and digital formats. These are indicated by the last front‑panel indicators, which consist of a set of four LEDs showing A/D sample rate (48, 44.1 and 32kHz, and Ext, which syncs to an external signal), a pair of LEDs labelled Digital Format (AES/EBU or S/PDIF) and a single LED labelled D/A Valid, which lights up when incoming digital data is detected at the selected digital input socket.

On the back panel (from left to right) there's the 9V AC power socket for the wall wart, then a pair of analogue outputs on those clever dual XLR/jack sockets, to provide balanced outputs on the XLR part, and unbalanced on the inner quarter‑inch jack socket. The input socket pair uses the same approach. The remaining four sockets are S/PDIF coaxial in and out (on phonos), and an AES/EBU in and out (XLR male/female pair). The manual explains every function well, and has a useful Troubleshooting section and even some diagnostic tests, using loopback cables between each pair of digital outs and ins, to check for correct operation.

A Lot Of Bottle

The Flying Cow's converters are full 20‑bit devices, and if your hard disk recording system allows 20‑bit recording, you can both record and play back at this bit resolution. If you're operating at lower bit‑resolutions, your software will discard the extra bits accordingly. I started out with an obvious application — using the Flying Cow's D/A with the S/PDIF output of the Creative Labs AWE64 Gold card, running Seer Systems' Reality synth. As expected, the difference was remarkable. With the Flying Cow patched into my mixer, every sound emerged as clean as a whistle, with the background noise dropping 15 to 20dB over the normal AWE64 analogue output. The software resonant filters sounded crisper as well, but this is hardly surprising, since the Flying Cow is more than double the price of the Gold card. One warning: if you switch between AES/EBU and S/PDIF using the Mode Select switch and there's no input connected, you will get some erroneous digital noises. Keep the levels low until the digital stream has been detected, and also when powering up or down. The Flying Cow should be able to deal with any incoming digital data between 1 and 50kHz.

Next I tried recording through the analogue input, and playing back again through the Flying Cow converters. The sound was excellent — clean, quiet, and a model of clarity. However, I did notice that the individual LEDs in the A/D level meters had noticeably different brightnesses, which also changed dramatically as adjacent segments came on, often making it look as if two segments were lighting together unless I looked carefully.

Since I still had the Event Gina soundcard (reviewed in SOS December 1997) installed in my PC, I replayed the same digital material through both sets of D/A converters, and frankly I could detect little difference between the two. However, my ears weren't deceiving me, since when I whipped off the top cover of the Flying Cow its D/A chip turned out to be an identical Crystal Delta‑Sigma 128x oversampling device (CS4327) to the four (one for each stereo pair) used by the Gina. On the A/D side, both devices again use the very similar CS5334/5335 chips. I made my rough‑and‑ready noise measurement as usual, by recording using the analogue input of the Flying Cow, and patching its S/PDIF output to the S/PDIF input of the Gina, so that I could record background noise levels. These measured ‑84dB (a very acceptable result).

There's no point in buying a Flying Cow if its performance is an udder disappointment, but fortunately it isn't. The 20‑bit converters provide a clean sound with more than enough dynamic range for most applications. The provision of coaxial S/PDIF as well as AES/EBU sockets should help you interface to plenty of devices, although there are still many digital recorders using optical Toslink connectors (like my Sony DAT machines) which will not be able to benefit from this box.

The price is good considering the specification — even mass‑market hi‑fi D/A converters cost at least £150, and the Flying Cow has a lot more than double this inside the box. If you do only need a D/A converter, Midiman have also just released the Flying Calf, for a mere £129, and this should prove a very useful little box for many people. At these bargain prices I expect both mother and son to do well.

A pair of high‑quality 20‑bit converters in a handy little case for a good price. Especially recommended for PC soundcard users looking for better quality sound.