Midiman are a company devoted to producing cost‑effective problem solvers, and with the Digipatch they're aiming to solve the problem of affordable digital patching. Paul White finds out how well they've succeeded.

The increasing amount of digital equipment finding its way into our studios brings its own special patching problems. Digital mixers and soundcards may include any combination of ADAT and S/PDIF optical interfaces or electrical AES/EBU and S/PDIF sockets, all of which need to be connected to something. Then there are DAT machines, ADATs, DA88s and various hard disk recording systems to consider, not to mention outboard D/A and A/D converters. As with analogue audio devices, you don't necessarily want all of these connected in the same way at all times. The most elegant solution is to use some form of digital patching system, but traditionally these have been both expensive and complicated.

California‑based Midiman have come up with a simple but effective low‑cost solution to digital patching with their Digipatch 12‑in, 6‑out programmable digital patchbay. This 1U rackmounting device, powered by a wall‑wart power supply has 12 digital inputs, each of which may be routed to a choice of six digital outputs. Only one input can be routed to an output at any one time, and no digital signal processing takes place at all, which means that the data structure of the incoming signal is passed through without change, regardless of format, flag settings, sample rate or whatever else. A complete patching setup may be stored as a Program for later recall and, true to the MIDI part of their name, Midiman have given the unit MIDI In and Out sockets for remote Program changing, SysEx dumping and loading of patch data, or control via the supplied utility software (for both Mac and PC).

The 12 inputs are arranged as six S/PDIF phono sockets and six optical connectors; the latter can be used either for S/PDIF signals or ADAT signals. There's no AES/EBU option and no TDIF capability — the system is limited to serial digital formats that can be sent down either a standard optical cable or a phono socket. The six outputs are arranged as pairs of connectors so that you get the same signal on both a phono connector and an optical output at the same time. In situations where you need to change optical S/PDIF to electrical S/PDIF or vice‑versa, this is obviously very useful, but because the unit doesn't monitor or interfere with the digital signals in any way, it's entirely up to the user to make sensible routing decisions. If you route an ADAT signal to one of the outputs and then try to read it from the phono socket using a DAT machine's S/PDIF input, for example, it's clearly not going to work. 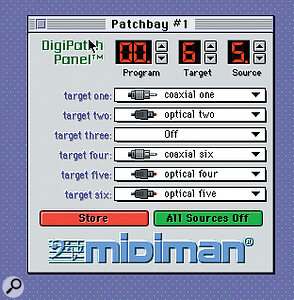 The Digipatch has eight buttons on its front panel, not counting the power LED, plus a 4‑digit LED display showing the Program Number, the Target (output) and the Source (input). The Source number includes a decimal point when an optical source is selected. Routing is accomplished by first selecting the Target output, using up/down buttons, then assigning one of the 12 possible Sources (or no Source at all if you select 0) to it, using the Source up/down buttons. Because you can't mix digital data streams without a digital mixer, you can't route more than one input to the same output, but you can route the same input to two or more outputs to split a signal to multiple destinations.

Once the routing has been set up for all the desired outputs, the complete setup may be stored as a Program, the number of which is selected using more up/down buttons. A maximum of 50 Programs (numbered 0 to 49) may be stored. A Store button looks after the storing part of the procedure, while a MIDI button can be pressed and held down to switch the front‑panel buttons to a different mode for MIDI setup. When this button is depressed, the MIDI channel can be viewed and changed using the Program up/down buttons. To disable external Program Changes, the MIDI channel should be set to 00. Also available in this mode is the ability to enable or disable a 'soft Thru' on the MIDI Out socket, and pressing the Store button when the MIDI button is down allows a SysEx dump to be initiated. The Digipatch also features a number of diagnostic routines, activated by holding down certain combinations of buttons during power‑up.

The supplied PC and Mac utility software is compatible with a number of MIDI drivers, including Mark of the Unicorn's FreeMIDI version 1.2 or later, Opcode's Open Music System (OMS) version 2.2 or later, Apple's MIDI Manager 2.0.2 or later, and standard modem and printer drivers. Using this software, up to 15 different units can be controlled via MIDI, each from its own window. One of these windows is shown in Figure 1 (see above). This enables routing to be carried out on‑screen, rather than via the Digipatch's front panel, and also allows routing setups to be stored as Programs.

Given the low cost of the Digipatch, I'd say that it's a very useful device for any studio that has more than two pieces of digital equipment to deal with.

There are two modes of MIDI communication relevant to the software — Single Ended and Two Way. Single Ended mode involves the computer sending SysEx data to the Digipatch without having any way of knowing whether it's been received or not. This mode is useful when you don't have a spare MIDI In port.

In Two Way mode, the computer looks to see how many Digipatch units are connected, using system exclusive messages (the last Digipatch in the chain needs to be hooked back to a MIDI In port in Two Way mode), and creates a Patchbay Window for each one it detects. All the program data from each unit is read into the computer's memory, and saved in a preferences file.

The first thing you need to ask yourself with a product like this is "who needs it?" If you only have a single DAT machine in your studio, clearly you don't need it, but what if you have a pair of DAT machines plus a hard disk editor with digital I/O? Sometimes you might want to connect the DAT machines so that you can clone from one to the other, while at other times you'll want to be able to feed material into or out of the hard disk editor. I have such a system at home, with the further complication of an Alesis AI‑1 sample‑rate converter, and as with any sample‑rate converter, when you don't need it, it's best to bypass it. The Digipatch can hold Programs to cope with all these scenarios and more. It can also convert from optical to phono or vice versa — useful for those people backing up their Fostex hard disk multitrack data to a DAT machine that only has phono S/PDIF sockets. Also, if you're lucky enough to have a soundcard with an ADAT interface, you may occasionally want to route this to and from an ADAT. Without a patchbay, this would involve a lot of re‑plugging and probably quite a bit of head scratching. Using the Digipatch to do the job for you means that all you have to do is sit down with a piece of paper, work out your obvious routing requirements, then create a series of Programs to store them. After that, you simply need a crib sheet relating the patch numbers to the jobs they do and you're away. Given the low cost of the Digipatch, I'd say that it's a very useful device for any studio that has more than two pieces of digital equipment to deal with, and the fact that it's a simple switcher rather than a data processor makes it very straightforward to use. Having the utility software is a useful bonus and it works extremely simply.

I have no serious criticisms of the Digipatch, and I didn't encounter any problems using either the hardware or the software. In addition, because the digital data is not changed in any way, there is no mechanism for the introduction of clock jitter or other undesirable artifacts. I don't much like the idea of yet another wall‑wart power supply in my studio, and (though this is more of a suggestion than a criticism) it would be nice to have at least one input and output on the front panel, so that 'guest' equipment brought into the studio could be hooked up without you having to burrow through a sea of cables and optical connectors to find the rear panel. I can also see the appeal of a slightly more sophisticated model with a few AES/EBU‑format inputs and outputs on XLRs. On the whole, though, this is a very practical piece of equipment that could make digital patching a whole lot easier.

It's simple, it's effective and it doesn't cost a lot. If you need to repatch your digital I/O cables on a regular basis, the Digipatch provides a neat and inexpensive solution.