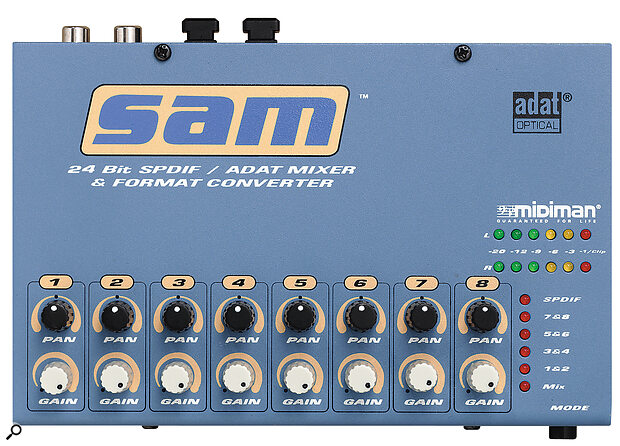 Midiman have a reputation for niche products at reasonable prices, and their latest, SAM, could do a number of useful jobs in the ADAT‑based studio. Bob Dormon makes the connections.

No doubt most of us have swallowed the hype about the virtues of digital recording: it's squeaky clean, and it can be manipulated easily and replayed reliably on a range of equipment. You can clone it, too. That last bit gives the technophiles the opportunity to discuss the effect of cumulative errors introduced by error‑correction systems in multi‑generation copies — not something the rest of us are likely to notice, let alone care about!

What most of us do notice is that, digitally speaking, two into eight won't go. There you are with your DAT, MD, DCC, CD or sampler, chuffed to bits that you've got digital interfacing, only to find that it's about as useful as last year's (or even this year's!) train timetables when it comes to hooking up with an Alesis ADAT or Tascam TDIF 8‑track digital recording system. The fact is that the 'consumer' S/PDIF standard, found on the stereo gear above, cannot directly transfer audio data to the ADAT or TDIF multi‑channel formats without some kind of digital mixer or format convertor in between. A variety of format convertors exist, typically at a premium price. Midiman's latest model, SAM, isn't exactly a snip, but it certainly is cheaper than the alternatives.

What makes SAM a lot cheaper than most is that much of the fancy stuff is absent.

What makes SAM a lot cheaper than most is that much of the fancy stuff is absent. It has ADAT optical in and out and S/PDIF co‑axial I/O, hence transfers between these two formats are all that is supported. In short, via SAM, you can either send S/PDIF stereo audio to an ADAT, or a selection of ADAT channels to S/PDIF (more on the ADAT options later). Unfortunately, there's no sample‑rate convertor, which is a real shame, as most folk use ADATs at 48kHz and typically have sample libraries and CDs at 44.1kHz. Whether SAM's sample rate is 48kHz or 44.1kHz is governed by the input signal (either ADAT or S/PDIF). However, the resolution of the SAM data throughput is said to be 24‑bit, which is certainly a plus point. As S/PDIF interfacing officially only goes up to 20‑bit, it has to be assumed that the unused bits available in the S/PDIF data structure are being used to fill the gaps to take it up to the quoted 24‑bit resolution. This is what Yamaha do on the DS2416 DSP Factory PC card and the 01v digital mixer's co‑axial I/O. It's S/PDIF compatible, but they go to great pains to avoid calling it that. Apparently, Midiman aren't so fussy.

The unit itself is about the size of an average paperback book, its compactness due mainly to the use of an external 9V DC power supply. On the front are two rows of eight knobs for panning and gain respectively. These are used in Mix mode, which enables all eight ADAT channels to be mixed to a stereo pair and sent to the S/PDIF output. A pair of 6‑segment LED meters displays output status, and a further six LEDs below them light individually to reveal the current input‑mode selection. A button on the side allows you to toggle through these selections: Mix, 1/2, 3/4, 5/6, 7/8 and S/PDIF. The numbered channel pairings enable you to select a pair of incoming ADAT tracks to be sent to the S/PDIF output. The S/PDIF selection offers the reverse: S/PDIF input signals can be sent to ADAT channels.

When you're sending S/PDIF audio via SAM to an ADAT recorder, all eight ADAT tracks receive an identical stereo signal in four track pairs. It's just up to you which ADAT tracks you put into record. SAM's mixer is completely redundant in S/PDIF mode and can't be used to swap over the left and right S/PDIF channels. However, ADATs made after the original black models have an enhanced digital input feature that enables you to re‑route incoming digital data to any track.

Transferring ADAT audio to S/PDIF is painless enough for anyone who knows their left from their right. You'll see why in a moment. In Mix mode, SAM performs as you'd expect, though ease of use of the panning and gain controls of the eight ADAT channels is compromised by the close proximity of the two rows of pots. There's plenty of space on the front panel, yet Midiman apparently didn't consider using more of it before planning out the PCB inside that confines the pots to such a small area. You can't help but rub against either row of pots when making an adjustment. The lack of space between pots also means it's more difficult to make chalk‑marks of your settings. Obviously, how this affects the user really depends on how often they are likely to use Mix mode, as there is also the option of transferring track pairs.

Maintaining the stereo integrity of track pairs throughout the recording process is vital, yet in this area SAM fails to impress. If you choose to bypass Mix mode — by selecting ADAT track pairs — you'll find that what comes in is sent out reversed (not inverted). For example, ADAT tracks 1(Left) and 2 (Right) are sent out to an S/PDIF destination as 2 (Left) and 1(Right). And so it goes on for all four track pairs. Perversely, SAM's output meters also reflect this reversal of fortunes. In many cases, you won't even need to hear the output to know that something's gone awry. However, if you were transferring a live drum kit recording from an ADAT tape to a hard disk recorder, you could end up in a right mess. The audio from the overhead mics would be in the wrong positions when used together with the individually miked toms, and so on. After all, you'd probably pay attention to the separate drum tracks, panning them in a traditional kit fashion, and take the position of left and right in the stereo image of the overheads for granted.

It's a pity, also, that the ADAT optical interfacing can't be selected to become S/PDIF, so that an ADAT optical input could be sent out as an S/PDIF optical output and vice‑versa. Being able to mix down tracks from an ADAT input in Mix mode and send them back to the ADAT would be a welcome feature, too. I tried it — nothing doing.

Despite the problems I've identified, SAM isn't a bad idea and is currently the cheapest way of doing this particular job. Alesis have stopped making their AI‑1 multi‑format converter, and beyond that the prices of format convertors get quite steep. One engineer I know thought SAM was a godsend. He regularly edits vocals using an ADAT and an ageing Mac Quadra running Digidesign's Pro Tools with an Audiomedia II card. Having instant access to multiple tracks and takes using SAM's mixer, all in the digital domain, is his ideal solution. The alternative for him is Digidesign's ADAT Bridge, which ultimately ties you up with more expensive kit. With SAM he can edit the takes on the Mac and then transfer them back to the ADAT.

SAM may well prove to be the must‑have accessory for those using older hard disk recording systems.

Moreover, SAM may well prove to be the must‑have accessory for those using older hard disk recording systems. With cards such as Lucid Technology's NB24, a NuBus 24‑bit co‑axial digital interface, many old Macs could gain a new lease on life when married to SAM, and new computers with cards like the DSP Factory can also take advantage of SAM's 24‑bit support. Samplists, too, can enjoy recording digitally into ADAT‑equipped systems or playing their sampler's S/PDIF out directly into a digital mixer fitted with ADAT interfacing. Obviously, there are many variations on this very basic theme.

Needless to say, sample‑rate conversion, which now appears on the most unlikely of consumer products, should really be featured on a device of this sort. Perhaps the aim was to keep SAM as simple as possible, but surely a lower price tag should follow. Nonetheless, SAM does come with a lifetime guarantee, and there's no doubt that it's a very useful box, although Midiman may have missed a few opportunities.

A nice idea that, for the most part, works well, although the lack of sample‑rate conversion will surely frustrate many potential users.