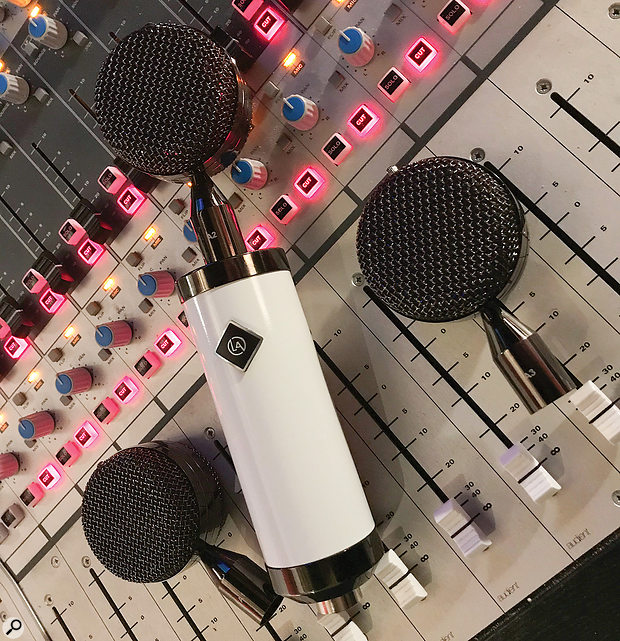 The three interchangeable 'pop‑top' capsules have fixed cardioid pickup patterns and are custom, in-house reproductions of the CK12, K67 and K47.Photo: Matty Moon

Luke Audio's new valve microphone provides three classic capsule options at a highly affordable price. Is it too good to miss, or too good to be true?

The last decade has seen a boom in boutique microphone manufacturing, which is quite exciting for us recording engineers. Online shopping, an abundance of social media platforms and cheaper production costs have enabled many talented electrical engineers and designers to create products and easily sell them to the masses. Never before has there been such a wealth of different microphone options available at all price levels.

Founded in 2015, in Nashville, Tennessee, Luke Audio are fairly new kids on the block. Allen Luke and his team began by creating emulations of classic microphones. The company initially manufactured the AL-X751, based on the Telefunken ELAM 251; the AL-X767, emulating the Neumann U67; the AL-X747, based on the Neumann U47; and the AL-X712, based on the AKG C12. Their latest offering is a large‑diaphragm valve capacitor model that tries to combine these sonic flavours into one microphone by including three interchangeable capsules, at a highly affordable price.

The AL-Y56 comes nicely flightcased with everything you need, including the power supply, a good‑quality cradle, foam windshield, IEC lead and seven-pin braided microphone cable. The microphone and additional capsules are enclosed in elegant dark wood boxes with sliding lids, and everything fits neatly into carved slots within the flightcase. You definitely can't dispute that you get a lot for your money here. It's maybe slightly over-engineered, with its boxes within boxes, but everything feels well manufactured. 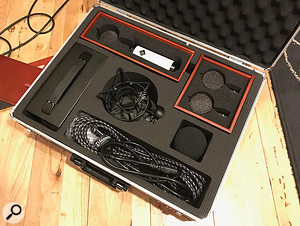 The AL-Y56 ships in a large flightcase, along with a range of quality accessories.The electronics are hand‑wired and the mic body is fitted with an EHX 6027A tube and an 11.5:1 output transformer. Depending on which capsule is attached, the microphone is claimed to accommodate a maximum SPL of 136-140 dB, presumably with the optional 10dB attenuator switched in. This, for some reason, is located on the circuit board within the microphone casing. The base of the microphone has to be unscrewed and the microphone disassembled to access the switch, which is not at all ideal. That said, whilst testing the mic I found no need to engage this pad even on relatively high-SPL sources.

If The Capsule Fits

The three interchangeable 'pop‑top' capsules have fixed cardioid pickup patterns and are custom, in-house reproductions of the CK12, K67 and K47, as found in vintage microphones such as the AKG C12/ELAM 251, Neumann U67 and U47 respectively. However, there is an interesting difference between Luke Audio's capsules and the originals, in that these all use a 1-micron, platinum‑sputtered diaphragm rather than the more conventional 3- to 6-micron gold‑sputtered affair.

The overall design and concept looks somewhat similar to the Blue Bottle Rocket, which also has interchangeable capsules. Blue offer a larger range of 10 different capsules, but the AL-Y56 and its three capsules come in at about a quarter of the price of Blue's flagship model.

During recording sessions, I always strive to fully explore the microphone options available. In reality, though, auditioning multiple mics on a source can be time‑consuming. Time is always tight and it's tempting to go with what you know. This is where the AL-Y56's 'hot-swapping' capability comes into its own. The capsules are fixed to the microphone body using a bayonet-style mount; a light push and twist quickly releases the capsule, allowing for swift change‑overs. The ability to put up a single microphone for a vocal, for instance, and quickly record a verse with each capsule, is fantastic.

Luke Audio briefly describe the sound character of each capsule thus: the A1 (CK12) is said to have "a bright, airy, open feel", the A2 (K67) "a more mid-focused and articulate sound" and the A3 (K47) "a full‑bodied, rounded and warm sound with a true vintage feel".

Trying the mic over a few recording sessions, I discovered that the ability to quickly change the capsule was great for keeping things flowing. The ease with which you can go back and forth meant that it never felt laboured, or that the session was being held up. I also found myself enjoying auditioning each capsule. They are quite different‑sounding: the A1 has a nice 'roundness' in the low end, with a slight boost at about 100Hz. It is also bright, with a presence lift in the upper mids and highs, and captures transients well. The capsule does have an 'airy' quality and I found the slight upper lift was great for bringing a source forward in a track without any extra EQ. The A2 has a softer, slightly mellower and more natural sound compared to the A1. The low end is also a touch tighter. The A3 is even less bright again; it seems much more mid-range focused, with an emphasis around 200-500 Hz, a slight attenuation from 100Hz down and a dip in the upper mids and highs compared to the other two capsules. One thing to note here is the slight variation in output level of each capsule. The A1 and A3 seemed fairly matched, but the A2 was around 2-3 dB quieter, and whilst this isn't a major issue, it can mean you need to perform minor preamp adjustments when switching between capsules.

During a drum session I chose to put the AL-Y56 up as a mono room mic. After listening to the drums in the room I placed the mic three or four feet in front of the kit, slightly off to the left (floor tom) side. It was about a foot from the floor and slightly angled down to get a little less direct cymbal sound and to pick up some reflections from the wooden floor. I wanted to capture a full kit sound with lots of low-frequency energy that would most probably be heavily compressed or saturated in the mix to add energy and bring out the character of the room. I popped on the A1 capsule first and straight away I was struck by how great the mic sounded. However, although it was crisp and bright, it had a little too much transient information for this purpose, and the slightly pronounced upper mids also meant the hi‑hats and cymbals would quickly dominate the sound when heavy compression was applied. In the same role, the A2 capsule sounded lovely. There was a nice bloom to the bottom end, but without making the drums sound too tubby, and this capsule's mellower, less bright sound meant the cymbals were pushed back slightly. The A3 sounded almost dull in comparison. It was very mid‑range focused, which can be a great characteristic for drum rooms, but it sounded muddy here and would have needed some low mids notched out to make it sit in a mix. 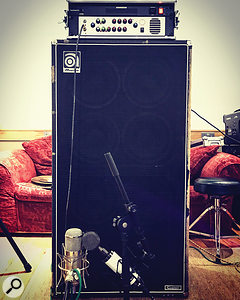 The three capsules provided very different — but all excellent — options on bass guitar.On the same session I thought I'd see how the AL-Y56 fared on bass guitar, setting it up about a foot back from an Ampeg 8x10 cab, pointing at the edge of one of the speaker cones. I was eager to see how the three flavours of capsule could be used to sculpt the bass tone and how each sat with the kick drum. The A1 sounded incredible. The low end was full and the broad boost from around 2kHz up really helped the note articulation. This capsule would be great if you wanted the bass right up front, driving the track. The A2 was really pleasing to my ears for this particular track: the low end instantly sat well with the kick drum and there was still just enough 'zing' to help the upper harmonics cut through without dominating the mids. The A3 definitely had a vintage vibe here. It gave the bass a throaty, mid‑rangey sound, which would sit well if you had a lot of low end on the kick drum and needed the bass to sit just above it.

I also took the opportunity to try the mic on a rhythm acoustic guitar part that needed to sit in a busy track, under the lead vocal. Positioning the AL-Y56 about a foot away from the guitar with the capsule pointing between the 12th fret and the soundhole, the A1 sounded full and bright with a nice attack. The low end was also tight and controlled. The A2 gave the acoustic a lovely soft tone and made it sit back in the mix.

On electric, I think the A2 would be of great use when stacking thick, double-tracked distorted rhythm guitars, where you have a lead melody guitar that needs to sit on top and cut through. The A3 had a 'chewy' character that I have to admit I didn't like.

Finally, I was particularly keen to try this microphone on a vocal session. When tracking vocals, especially when working with a vocalist for the first time, I will set up a few different microphone options to find something that complements their voice. It can be a slightly lengthy process getting three different — and often large — microphones to play nicely together behind a pop shield, as well as patching each mic into the same preamplifier/compressor chain and then level-matching them. The AL-Y56 made this easy, and within a matter of minutes I had the microphone up and we were soundchecking the A1 capsule. The bright, transient characteristics really suited this particular vocalist and I found that it took compression well. The lift in the upper mids and highs helped the vocal sit up-front in the track, without sounding overly sibilant or harsh. I found that the A2 was perfect for backing vocals here; its having less presence meant the vocal sat behind the lead without me having to EQ. The A3 sounded a little too dark for this track. However, it saturates nicely and does give that '60s vocal sound, which would work great on the right song and production.

This is a well‑manufactured and quality‑sounding microphone that is great value for money. Sonically it stands up well against far more expensive microphones. The 'pop‑top' design and ease with which capsules are changed makes auditioning really quick, and the variation in character of each capsule makes for a highly versatile microphone with a broad sonic palette. I found that the A1 and A2 capsules sounded most instantly pleasing in tests, but I have no doubt that if I'd had the time to get more intimately acquainted with it, the A3 would find itself in use a lot too.

The Blue Bottle Mic Locker is probably the closest alternative, and it ships with four capsules rather than three, but is several times more expensive.

You can download a ZIP file of hi-res WAV audio examples of all three capsules in action, on acoustic guitar, electric bass, drum kit and vocals,. See the righthand Media sidebar or use the link below.

A well‑built, affordable and great-sounding valve mic with a modular capsule system that gives you three distinct sonic flavours.