If you're always on the lookout for unusual sources of sounds, the Vibrati Punk Console (VPC) is well worth consideration. The VPC is a self‑contained synth with multiple variable oscillators fed into a speaker. It's driven by a 9V battery and comes only in DIY kit form. According to the Lush Projects web site, the VPC offers "a rich range of warbles, squawks, buzzes, screams and tone sequences,” but if that description's not enough, you can see/hear the device in action on YouTube at http://freo.me/vpcutube. 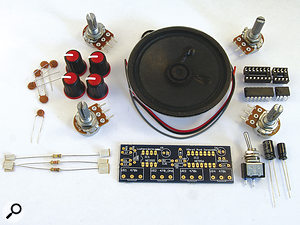 From a kit of parts...The kit is based on a previous design called the Atari Punk Console, created by veteran electronics hacker Forrest M Mims III, and updated by Iain Sharp (aka Lush Projects). Iain has done a very good job of creating an easy-to-build kit: the package contains a circuit board, two ICs, a handful of resistors (fixed and variable) and capacitors, wires, a switch, a small speaker and some nice red knobs to fit over the variable resistors. The circuit board is very cleanly laid out, with reasonably large soldering pads designed for newbie solderers. Also as an aid to such newbs, there are sockets for the ICs (so they don't get fried during soldering), as well as a copy of an excellent cartoon book introduction to soldering.

As well as the cartoon, there's a very detailed guide to building the VPC, complete with stage-by-stage pictures and many useful hints. The documentation is all online, and while I was slightly disappointed not to get a printed copy in the pack, the online version can be updated more easily. There are also instructions online on how to very simply 'mod' the VPC to provide a line output for use with a PA. 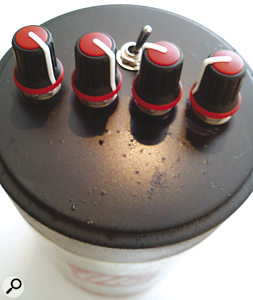 ...to a coffee‑can synth!Having been soldering very badly for the last 30 years, I learned some useful tricks from both documents. The build itself was easy (my 10-year-old son helped, and with a little more practice he could have made the whole thing!), and made for an enjoyable Sunday afternoon.

So what about the sounds? As soon as you switch on the VPC, it starts growling, whining and chirruping at you. With controls for the base frequency, waveform shape and LFO, this quirky synth produces a wide variety of complex sounds and is a real blast to play around with. I can see the VPC being used as a great source of interesting samples. The only complaint — not from me, but from my family — is that there's no volume control!

Once you've built the VPC, tested it, and spent time enjoying the random sounds that emerge, you're left with the challenge of finding a suitable container to house it. The instructions don't give any advice on this front, but it's a simple matter to find a box, can or something similar and drill five holes in it. The four variable resistors all come with suitable mounting nuts and hold the VPC firmly in place on your container — which, in the case of my build, was an old coffee can.

I discovered only two flaws in the design: firstly, there was no easy way of mounting the speaker (I fixed it with epoxy resin to some cardboard, and then glued that into my coffee can); and, secondly, the speaker wires provided in the kit were very short and didn't match my approach to mounting — so I had to unsolder them and replace them, which took almost as long as the initial build! I mentioned this to Lush, who say they'll replace them with some longer wires in the next batch.

All in all, though, this is a great kit. Some simple soldering, followed by a whole bunch of crazy noises — and all for a pittance. Highly recommended! Paul Fremantle

£24.50 with UKworldwide shipping including VAT.