Mackie have bundled eight of their popular Onyx preamps into a 1U rackmount audio interface. We put it to the test... 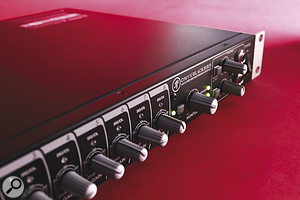 The latest addition to Mackie's popular Onyx range of mixers and computer audio interfaces is a 1U, rackmounting, Firewire‑based unit designed to compete head‑on with the likes of Focusrite's Saffire Pro 40, M‑Audio's Profire 2626, Presonus's Firestudio 2626 and Echo's Audiofire Pre 8. It follows the popular template of providing eight analogue inputs with mic preamps, including a pair of 'super channels' that have insert points, separately switched phantom power, and can serve as DIs for electric guitars and the like. And, like most of its rivals, it's also expandable, courtesy of ADAT optical I/O and the ability to 'stack' multiple Blackbirds on one system.

The full range of Blackbird I/O is summarised in the 'Vital Statistics' box, but it's worth noting a couple of distinctive features here. Unlike many of its rivals in this price bracket, the Blackbird features two pairs of ADAT optical sockets; however, the second pair is used only to support S/MUX operation at high sample rates, so it's not possible to access more than eight digital input channels. Also unusual is the fact that the Blackbird's optical sockets can't be switched to accept S/PDIF signals. Coaxial S/PDIF connections are also absent, as is any form of MIDI I/O.

Another noteworthy feature is the way in which the Blackbird handles low‑latency monitoring. Small interfaces, such as the original Digidesign M Box from a decade ago, often provide the option of routing inputs directly to outputs in the analogue domain. This approach has the advantages of simplicity and true zero‑latency operation, but in order for it to make sense on a multi‑channel interface, would mean bolting on an entire analogue mixer. As a consequence, most multi‑channel interfaces use software‑controlled, DSP‑powered mixers to handle low‑latency monitoring in the digital domain.

The noteworthy thing about the Blackbird is that it does both. Mackie provide a comprehensive monitor-mixing utility, but the two 'super channels' are also furnished with a direct connection to the Monitor output bus, allowing whatever is plugged into them to be auditioned entirely in the analogue domain. To my mind, this is a really good idea, enabling you to get going fast with overdubs without having to open up the mixer utility and route inputs to outputs. If you do need to do the latter, the fact that both of the headphone sockets are treated as separate output pairs is also welcome.

Mackie boast that the Blackbird is "built like a tank”, and while I wouldn't back it in a stand‑off with a T34, the case is indeed made of fairly solid metal. By contrast, the front‑panel knobs feel a little cheap, and with only a single red/green LED per channel, the Blackbird also loses out in the metering department compared with some of its competitors.

I was a little surprised to find that no driver CD is included. This seems to be a deliberate move on Mackie's part to make sure everyone is forced to download the latest version; once I'd done that, installation was straightforward. So too is Mackie's mixer utility. In essence, this provides a separate mixer panel allowing you to set a separate balance of all 16 inputs for each of the nine output pairs (three analogue line outputs, two headphones and four ADAT pairs). It strikes a sensible compromise between simplicity and capability; I certainly found it easier to set up than either Focusrite's Saffire Control or RME's TotalMix, for example, but never found myself prevented from doing what was needed. Were I to venture a small niggle, it would be to point out that it would be nice if (say) Ctrl‑clicking on a fader caused it to jump to 0dB ; as it is, you have to click and drag to make any level or pan adjustments.

Having got the Blackbird up and (apparently) running on my Windows 7 laptop, I decided to put it through its paces on a couple of real sessions, and as is sometimes the case, using it in a 'real world' situation brought to light a problem that hadn't been apparent at home: the Blackbird would sometimes drop out and abort recording (invariably in the middle of the best takes!).

At first, I suspected a clocking problem: I was using the Blackbird slaved to ADAT, and the 'Detected Sample Rate' field reported a number distantly related to 44100Hz, but frequently as much as 60Hz out either side. It turns out, though, that this is normal behaviour, and the readout is not intended to be precise, but simply to confirm that the input sample rate isn't wrongly set to 48 or 96kHz.

Having ruled out clocking, I turned my attention to the diagnostic tabs of the Blackbird Control panel. The Windows version of this includes both a helpful 'DPC latency checker' and a scanning utility that confirms whether the Firewire controller in your PC is compatible with the Blackbird. Sure enough, my Dell laptop scored extremely badly on the DPC latency meter, and the Firewire scan revealed that it used a non‑compatible Ricoh chip set. The section of Blackbird Control dealing with DPC latency allows the unit to be switched from the default 'Safe Mode 1' into one of three other modes, and selecting Safe Mode 3 — the safest of all the safe modes — made things a lot better, though not entirely rock‑solid.

The Blackbird Control's software mixer.Mackie told me that the DICE Firewire chip set they use tends to be pickier than most about Firewire controllers in PCs, but the driver software must have something to do with it, as I have had different results from other interfaces that use DICE chip sets: the Focusrite Saffire Pro 40 works fine in the same Dell laptop, while the M‑Audio ProFire 2626 isn't even recognised by it. Mackie are apparently building up a database of compatible systems, but given that they've gone to the trouble of developing utilities to scan the host computer, it would be nice if these were available as downloads so that buyers could check out their systems before parting with their cash. Likewise, it would make sense if the DPC latency checker was enabled automatically, and for the Blackbird to deliver some sort of warning when it does encounter a DPC‑related glitch. It would also be lovely if the system could recover more gracefully from such a glitch, even if it meant a drop-out or click in the middle of your recording.

I mention these points more by way of information than criticism, because it's hardly fair to criticise a product for not working on a system that isn't officially supported! It should also be remembered that Mackie go much further in providing diagnostic tools than other manufacturers, and if you're on a Mac or a compatible PC, you should have no problems — I tried the Blackbird on an older Windows XP laptop, where it took its broken wings and learned to fly with no difficulty at all.

In general, I liked the Blackbird as a recording interface. Mackie are very proud of their "boutique quality” preamps; personally, if I were visiting a preamp boutique, I'd hope for a bit more than the 60dB gain you get here and on most interface preamps, but within that range, these are clean and clear‑sounding, albeit perhaps a hair light on bottom end with my old Beyer M260 ribbon mics. Just like the preamps on most of the Blackbird's rivals, they aren't particularly linear, and much of the available gain is to be found within the last quarter of their travel. As I've already mentioned, the Blackbird Control utility is a model of clarity.

There is stiff competition in this part of the market, and assuming that the above‑mentioned problems are more the fault of Dell than of Mackie (which is what I'm inclined to think), how does the Blackbird stack up against rivals from the likes of Focusrite and Presonus? Well, on the plus side, it offers word clock I/O and support for high sample rates over ADAT via the S/MUX protocol, which most of its rivals don't, and the direct monitor path for the first input pair is a very nice touch. However, these features must be weighed against the S/PDIF and MIDI ins and outs that are missing here, and the better metering you get with something like the Focusrite Saffire Pro 40. The sonic differences between the two are minimal, so really it's a question of what best suits your needs.

The Blackbird is a very capable and affordable interface, which is impressively easy to use.