The M930's bigger brother is a large‑diaphragm condenser that displays all the Gefell family traits, but with added visual appeal. 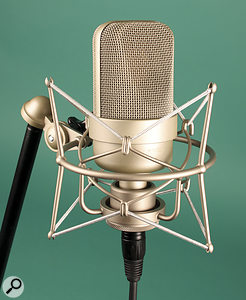 Microtech Gefell are a German company with a reputation for making very high‑quality microphones, and the latest addition to their catalogue is the M1030, a studio condenser that combines a large diaphragm with a solid‑state impedance converter.

Essentially, this is Gefell's existing M930, but in a much larger body. The M930 is a lovely microphone, but its diminutive body apparently puts off some potential purchasers because it simply doesn't have the kind of studio presence that a conventional large‑diaphragm mic, like the venerable U87, for example, does.

The review model M1030 was supplied in an aluminium flight case, complete with both an MH93 stand‑mount adaptor and an EA92 cat's‑cradle‑style shockmount. The microphone has a satin matte finish, and the grille basket has nicely rounded corners and smoothly chamfered lines that make it look as classy and expensive as it is. The M1030 is significantly larger and heavier than its M930 sibling, measuring 145 x 66mm and weighing 355g.

A common trap to fall into when using any MG microphone is to mount it facing the wrong way, as the company logo is on the rear of the microphone body, whereas almost every other manufacturer places the logo on the front. For future reference, the front of the M1030 (like other MG models) is denoted by a laser‑etched model number and polar diagram graphic — supplemented here by a small green LED inside the grille, which indicates when the mic is powered up.

The capsule is a single‑diaphragm cardioid, exactly the same as that in the M930, but it is apparently a 'selected' version, chosen for its frequency response and resonance characteristics to complement the different acoustic environment presented by the M1030's larger grille basket, where it is supported by an internal shockmount. The on‑axis frequency response appears identical to the M930 below about 5kHz, as you would expect, with an extremely flat response reaching ‑3dB at about 35Hz. Above 5kHz, though, the presence peaks of the two models differ slightly, the new M1030 having a slightly narrower presence peak centred at a slightly lower frequency (roughly 10kHz, instead of 12kHz for the M930). These differences are entirely due to the different internal volumes of the head grille assembly changing the nature of internal high‑frequency reflections, and producing a subtly different sound character. Both microphones reach ‑3dB at around 18kHz, and exhibit a smooth roll‑off above that.

Perhaps more significantly in terms of the overall sound impression, the off‑axis frequency response is substantially different between the M1030 and the M930. The new model provides rather less rejection of rearward sound, only managing to match that of the M930 in a small band around 1kHz. Below 500Hz the attenuation is about 16dB, compared to over 24dB for the M930. It's a similar story for the high end too, with rearward attenuation being roughly 4dB to 6dB less compared to the M930, through the 2kHz to 10kHz range.

Looking at the technical specifications, sensitivity is a healthy 21mV/Pa, self-noise is an exemplary 7dBA, the maximum SPL (for 0.5 percent distortion) is a very impressive 142dB, and the phantom‑power current is very modest, at 3.6mA. The electronics involve some clever optically isolated powering technology, in which a high‑intensity LED driven directly from the phantom supply illuminates a photocell, which drives a DC‑DC converter. This innovative approach neatly isolates the capsule bias and impedance converter power rails from the phantom supply, which helps in achieving the very low noise floor.

The M1030 has a very smooth response with a lot of detail at the high end, clarity through the mid range, and a well‑extended bass response, which is controllable by the distance between mic and source, thanks to a moderate proximity effect. The on‑axis sound remains tonally consistent across a wide ±35‑degree angle, with the HF dropping off fairly quickly beyond that, as you would expect. Although the M1030 has a multi‑layer mesh grille, it is slightly susceptible to popping when used as a close vocal mic, so some kind of external pop‑screen is advisable. I performed most of my testing, purely for convenience, with a Rycote USM shockmount fitted with the new integral pop screen, although the included MG EA92 shockmount worked just as well at isolating mechanical vibrations from the stand. The supplied MH93 stand adapter makes for a more compact mounting arrangement, of course, but provides noticeably less protection from shocks and vibration.

Comparing one of my own M930s with the M1030, the on‑axis tonal differences are extremely subtle, but the slightly peakier and lower HF presence boost could be detected on some sources. In some cases this characteristic gave fractionally more bite and detail, while occasionally it made vocal sibilance and guitar fretboard finger noises slightly more intrusive — although these things are very source‑dependent. The character difference was extremely subtle and I couldn't say it was a universally good or bad thing; it was just slightly different and so tended to complement some sources nicely, while being slightly less flattering for others — just like any other good mic!

I also compared the M1030 against a Neumann TLM103 and, again, found it extremely hard to separate the two for on‑axis sources. There was a subtle difference in tonality, and that would inevitably lead to favouring one mic over the other in specific situations if you were able to compare them both, but neither had an overriding advantage and both delivered very usable results in all circumstances. (Surf to /sos/aug11/articles/m1030media.htm to hear the M1030 contrasted with both our reference TLM103 and the M930.)

Interestingly, when comparing the M1030 directly against the M930 and TLM103, the Neumann occasionally seemed to deliver a sound that had slightly more '3D realism' about it, but more often than not the three microphones were all but indistinguishable.

When tried on a variety of instruments the M1030 performed extremely well, always delivering a very usable and detailed sound. It could not be described as a clinical microphone, and it has a nicely full‑bodied and slightly warm sound quality, but this doesn't overwhelm the source character at all — and it's beautifully balanced with the 'bite' of the presence peak.

The M1030 is primarily intended for voice applications, and in this context it worked extremely well — particularly on spoken‑word recordings, where the very low self-noise provided a useful advantage. The microphone's enormous headroom (25dB more than a U87 for the same distortion level!) will win it friends when recording vocalists who like to really belt it out, too — and the nature of the presence peak is also quite similar to that of the U87, which might help the M1030 in A‑B comparisons.

The M1030 obviously shares many positive sonic and technical attributes with the M930 — particularly the high headroom margin, very low self-noise and the smooth, extended frequency response. Its greatly enlarged body and grille are clearly intended to help the mic appeal on a visual level to that part of the studio market that might otherwise dismiss the diminutive M930, despite its immense capabilities and lovely sound character. Clearly the new grille basket has altered the high‑end response slightly, but the changes are small and subtle and, arguably, are beneficial in its primary role as a vocal mic. The reduced off‑axis rejection is a little disappointing, but it's very unlikely to become an issue in practice, and especially not when used as a vocal mic in most situations. However, I would suggest that the M930 remains the preferable option for any stereo‑pair applications.

There's no doubt that the M1030 is a very capable high‑end microphone indeed, but in the UK, at least, I fear it is not priced competitively enough against the obvious competition to gain the consideration that it deserves. That being said, the M1030 is a very classy mic that certainly deserves serious auditioning alongside the likes of Neumann's TLM49.

The M1030 is clearly an expensive microphone, costing almost twice as much as the Neumann TLM103 — which sounds virtually indistinguishable — and a few hundred pounds more than the TLM49 (both being fixed‑pattern cardioid mics of broadly comparable performance and quality). Stretching the budget a little more brings the superb Neumann U89 multi‑pattern mic into reach — a microphone that many favour over the U87 — while the hugely versatile Beyer MC840 and AKG C414 XLS multi‑pattern mics cost significantly less. The Brauner Phantom C and the Blue Mouse are other strong contenders for consideration, along with valve mics such as the Charter Oak SA538, the SE Gemini II or even the Peluso 2247SE valve mic.

Designed to compare favourably — both sonically and visually — with more familiar studio vocal microphones, the M1030 delivers on every level. It has extremely low self-noise, a smooth and extended frequency response, and a modest presence peak that never intrudes.

Your Questions Answered
4 weeks 14 hours ago.