As any parent with very young children knows, toys can be very noisy things, in a crude, lo-fi kind of a way. Toys In Wonderland samples 37 toys, plus four analogue synthesizers, providing high-quality, 24-bit, 44.1kHz recordings of crude, lo-fi sounds via a custom Kontakt interface. Naturally, the product will be of interest to anyone who creates music or Foley sound for children's television programmes, but composers looking for something a little quirky may also find it inspirational.

The content, which comprises 1049 samples in all, is divided into four folders, named TIW Original, Percussive, Melodic and Arp FX. The exact origin of the sounds in the last three folders is unclear, but the TIW Original folder is the home of the instruments created by sampling toys, and it contains 52 variations. Overall, there seems to be a predominance of shakers and drums, but not many electronic toy sounds, and too few melodic instruments. There are the exceptions, though, like the Water Trumpet and Petti Harmonica, which add a bit of colour. The most fruitful sampled item is the Toy Phone, which not only has a highly synthesized American voice reading out numbers zero to nine, but also includes some classic cartoon sound effects, cheesy sheep and elephant noises, and phrases like 'have a nice day', 'bye bye', and 'oink'! 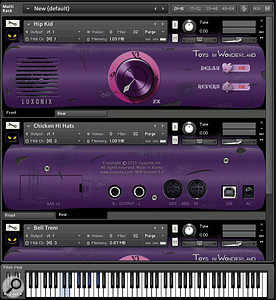 folder's samples are taken from quite a variety of instruments, their only commonality being that they could be used to create rhythmic lines. Some of the samples in the Catch Ball kit, for example, sound like Velcro being peeled, while others are closer to the noise a match makes when struck. Other notable examples of diversity include the Water Perc kit, which sounds like pebbles dropped in a cave, and the descriptively titled Talking Zipper. Hip hop producers are likely to find some useful drum sounds in the folder, as will electronic glitch acts.

The Melodic folder is just as hard to define, although its samples are tonal and generally have more sustain than those in the Percussive section. Auditioning the melodic instruments is a little like flicking through the presets on a workstation, in that there are organs, bells, wind instruments and a variety of analogue sounds patches.

Out of the four, the Arp FX folder is probably the one aimed most squarely at sound designers. It contains a mixture of percussive and tonal sound effects, most of which are too odd to fit neatly into the Percussive and Melodic folders.

The Kontakt interface is extremely simple and only has three controls. There is a delay and a reverb, neither or which have level sliders and can only be turned on and off, plus an effects knob that seems to overdrive the samples in some way. Vibrato can be added by moving the Mod wheel, but that's as complicated as it gets.

Given its relatively low price, TIW is a good option for those who already have some sensible bread-and-butter libraries, and are looking for something a little less predictable. Tom Flint