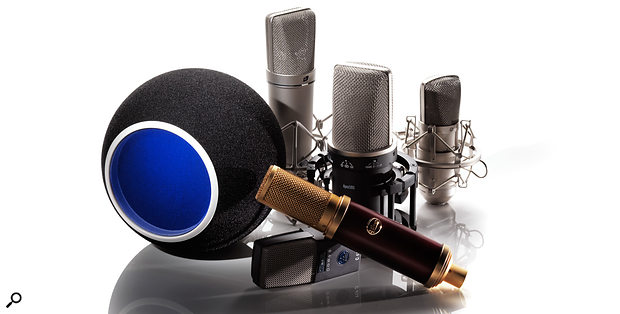 Can this small ball of foam really take the room out of the equation when recording vocals?

Kaotica's Eyeball is a different take on the 'virtual vocal booth' concept, and is designed to keep unwanted off-axis sound out of the microphone so as to facilitate cleaner recordings in rooms or spaces with inadequate acoustic treatment. It's also designed to channel more of the vocal sound energy into the microphone than with the mic set up in free space, so you actually get a slight apparent increase in microphone sensitivity. This latter characteristic might sound like a recipe for unwanted sound coloration, but the designers have made a lot of measurements and produced a wealth of technical evidence that appears to support their claim that the sound remains accurate; their test results suggest that the Eyeball doesn't affect the mic's frequency response by more than ±1.4dB right up to 30kHz.

The key questions, though, are how it performs and how easy it is to use. On the face of it, the Eyeball looks like a large foam windsock, with a horizontal cavity bored into it around 4.5 inches in diameter. Another hole in the base allows a side-address mic to be poked in from below, and in many cases the Eyeball can simply sit on top of an existing shockmount. A custom-made pop shield with blue nylon mesh, pushed into the front of the cavity, completes the assembly. The foam is fairly dense, and this makes the structure feel quite secure. Note that while most side-address mics will fit (up to 2.75 inches in diameter), the foam won't stretch far enough to accommodate extra-wide-bodied mics. There are many advantages to this format (assuming it actually works as described — which I'll get to!) and despite what seems to be a high cost for a seemingly simple foam gizmo, it's no more expensive than many of the curved 'behind the mic' screens on the market.

It's clear that the light weight of the Eyeball is not going to cause the mic stand to overbalance (which some screens can) and its small physical size also facilitates better eye contact with the engineer. Another criticism of conventional screens is that they make it difficult for vocalists to put their lyric sheets where they can see them easily without compromising their singingposture. Again, that's not a problem here. So, it all comes down to how well it works as a screen and whether or not it allows the true character of the mic to be maintained.

I made my test recordings using the new Rode NT1 microphone (cardioid) set up in my control room, firstly in free air with no pop shield, then inside the Eyeball with the pop shield fitted. As the Eyeball design claims a channelling effect on the incoming sound, I also took care to set the pop shield at precisely mouth level, speaking around six inches away from it, though singers may find that they want to work a little closer. As the documentation suggests, there seemed to be a decibel or two more level with the Eyeball fitted, and I also felt as though the lower-mids had come up in level a fraction. However, any tonal change (other than the wanted attenuation of room reflections) is very subtle; to put this in more practical terms, I've heard just as great or greater changes when placing a conventional curved screen behind a mic. I also tried recording with and without the pop shield to see if that had any subjective effect on the sound, but there was nothing I could detect on general speech.

My tests confirmed that the foam surrounding the mic provides a worthwhile screening effect, attenuating off-axis sounds and room reflections to a significant degree. In this respect the results are certainly no less effective than when using a conventional screen, and with the Eyeball there's actually more screen coverage at the sides of the mic (as well as above and below) where cardioid models are still very sensitive. Another design plus point is that having a snug-fitting pop shield like this means there's no path that allows air blasts to leak around the edge of the screen.

To achieve the best results, the singer needs to work close to the pop shield and to sing directly into it, rather than above or below it, but if you do that the Eyeball actually works very well. I'd still recommend putting an absorber behind the singer to intercept reflections from that wall, especially if it is close by, but as always a cheap polyester duvet works fine for that purpose. This simple strategy means the sound can be dried up nicely even when working in very reflective spaces. Applications for smaller studios that have no dedicated vocal booth are obvious but the Eyeball is also well suited to straight voice-over work or podcast production, particularly given that it still allows a clear line of sight to your cheat sheet!