Boutique Swedish manufacturers Milab have made possibly the most expensive kick-drum mic ever. But is its quality equal to the price?

Swedish manufacturers Milab may not be the most well-known global brand, but they have a history stretching back more than 70 years, and a well-deserved reputation for making extremely high-quality microphones. Their products are hand-built in small batches, using components produced entirely in-house at their Helsingborg plant. They design the microphones they want to make, unaffected by trend or the strategies of their competitors: this is not a production line where automatons glumly clock on and off, but a company of people who care deeply about what they're doing. They have members of staff who have worked there for decades, and in some cases their parents before them. And this sort of history, loyalty and innovation is a big part of the art of making truly musical microphones. I didn't hesitate when I was asked to have a look at this one.

So what is the BDM01? It's a dedicated bass-drum microphone, built around the small-diaphragm capsule of another of Milab's products, the VM44, but with some design tweaks to make it ideal for kick-drum use. It's cardioid, transformerless, and features a significant high-frequency presence, achieved through the natural characteristics of the capsule, combined with some additional filtering in the amplifier. It further differs from the VM44 by virtue of changes in the headbasket, the rubber mounting of the capsule, and a reduction in the polarisation voltage, allowing it to handle an impressive 155dB SPL without audible distortion.

The microphone is compact, discreetly finished in matte black, and comes in a flip-top vinyl-covered box with a foam insert. Included with the review model was the shockmount, a printed brochure and a frequency response graph. Milab publish a standard frequency response graph on their web site and in the brochure, but as microphones are always subject to subtle variations, they include the test measurement print out for your particular mic — it's a nice detail. The frequency response is worth a brief description. It's basically flat through the midrange, beginning to lift at around 1kHz, rising to quite strong peaks at 3kHz through to around 10kHz, before beginning to fall away somewhere in the 13kHz area. At 6kHz the response is around 8dB up, and it's still 6dB up at 10kHz. This is pretty typical of the sort of equalisation that might be applied to a modern kick-drum sound. What is perhaps a little more surprising on paper, though, is that the frequency response starts to very gently drift down from about 500Hz, ending up around 6dB down at 50Hz. You might expect a dedicated kick-drum microphone to show some enhancement in the lows as well as the highs. Well, we shall see. And, more importantly, we shall hear.

I took the BDM01 to Offtape Studios in Farringdon, where drummer and producer Tim Bazell and I had a play around with it. We set up the house drum kit, a Yamaha Recording Custom, a spaced pair of Neumann KM64's above the kit, and the BDM-01 just in the hole of the resonant head. I also brought a vintage AKG D25, one of my favourite mics for kick, and compared that to the Milab at the same position, along with an AKG D112 from Offtape's mic cabinet. We switched the kick for a 1964 Ludwig 22x14 Super Classic, to see if the voicing would deliver the classic sound of the drum, and we tried the mic in some alternate roles on the kit, using it as a close mic on the snare, as well in the centre of the kit as a whole, positioned near the snare, just above the batter-side hoop of the kick drum. I also tried the mic on an Ampeg bass amp, and experimented with it on guitar amps and for vocal use.

Before we talk about the sound of the microphone, it's worth pointing out that this micis extremely easy to work with. Firstly, it's small. Think Shure SM58, but shorter. It's solid and beautifully made, but not too heavy. The shockmount is a simple arrangement: a rubberised tube which you just shove the mic through. These things all add to its ease of use. You don't need to arrange counterweights, or rig some unusual 'frankenstand' to get it in the right place. It can be positioned far from the stand's centre of gravity without problems, which is always a plus in this application. The shockmount doesn't slip or sag and you could get the whole assembly into quite a small hole in the front head of the kick. I really appreciated how physically easy it was to work with. On a related note, it's the sort of mic that would just disappear in a broadcast situation. If you're not looking for it, it's invisible. If it were a superhero, it would be Batman.

When I listened to the recordings we made I came to two conclusions quite quickly. The first is that this is a really beautiful-sounding microphone. It has a very natural quality to it, a sort of effortless balance that delivers very much what you expect having heard the drum in the room. The second is that it's bright, but not clicky. It's a sort of airy brightness that works very well for its intended application, but because of that it's not especially versatile. It was a little too bright for guitar amps and most vocal work, and while I actually loved what it did as a close mic on the snare, beautifully bringing out the ghost notes, it does tend to highlight the hat in a way that could prove problematic with some players. But I'm not criticising it for that. It's not the SDM01, it's the BDM01, and for kick drum it's a fantastic microphone.

Comparing it to the D112 made the AKG sound ugly and pushed in the low end. The strong 100Hz hump of the AKG just seemed overblown. In comparison to the Milab's effortless, natural low end, the D112 sounded almost as if it was hitting the mic amp too hard. Despite the tailing off of the low end on the frequency response graph, the low end sounds solid and present, the 50Hz weight not overshadowed by any large boosts further up. The even balance between that weight, the punch at 100Hz and thickness at 200Hz makes for a natural presentation. And that brings me back to the highs, which, while relatively bright, translate into definition and a little air. The sound is more akin to what the drummer might expect to hear. The D25 is quite different. It has much more of a classic midrange emphasis — that rather beautiful, vintage quality that I also love. The D25 and the BDM01 feel like opposite sides of a coin to me. I would love to own both.

In the centre-of-kit position, the Milab added a clarity and cut that I really enjoyed. It lacks any sort of confused phasiness that lesser microphones suffer from, and I think that's probably down to an uncoloured off-axis response. As expected, it was quite bright in this unintended application, but I liked what it brought to the sound. While the brightness might sometimes be a little too much for those sorts of positions, using it really made me want to try the VM44: Milab's small-diaphragm condenser on which the BDM01 is based. I'd love to hear that on snare, overheads and toms. There's something beautiful in the character of this capsule and I think a combination of VM44's and a BDM01 would deliver one of those wonderful recordings that's 'invisible' but not sterile.

How Swede It Is

When I say that this microphone is not always going to be suitable for uses beyond the kick drum, that's not quite the whole story. I really liked it on bass. The solid and defined sound of the mic gave a beautiful, clear sound from the amp. The lower portion of the high-frequency boost provides some nice articulation, and beyond that it doesn't really affect things because there's not much happening up there.

People often complain that magazine reviews are never really critical of anything, and I've thought hard about what I might change about this product. I started by thinking about the cost. With a recommended retail price of £690 including VAT, it's not exactly cheap. In fact I don't think there's a more expensive dedicated kick-drum microphone on the market. But on the other hand, as I mentioned previously, it's entirely hand-built, with every component produced in-house at Milab's small plant, and comes with a lifetime warranty. Would I change that about it? Would I rather it was a fraction of the price, with parts mass-produced in the Far East? No I would not. I went on to consider the frequency response. Would I rather it was a little less bright and a little more sensitive, thereby a little more flexible? Well, no: it's been designed to do a job, and it does it very well. It's the right horse for the course. If I wanted a more flexible design I could just opt for the VM44, which is similarly priced. Finally I hit upon it, my big grievance, the fly in the Milab ointment: I don't really like the box. I'd rather it was a plastic moulded one with a proper catch, rather than the flip-top vinyl thing.

There aren't many other condensors I can think of that are specifically designed for kick, though the Neumann U47 FET gets a lot of use that way. But then it's not designed for kick drums, and not often used as an inside mic. There are plenty of alternative dynamic mics, however, including AKG's D12 variants, the E-V RE20 and Audix's D6. 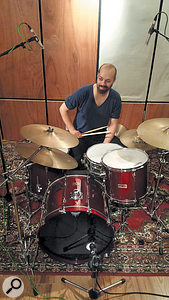 The BDM01 in use on the kick drum at Offtape Studios in London.

You can hear the Milab in action, alongside an AKG D112 and D25 for comparison purposes. The audio examples include a blend of kick and overheads for each of the BDM01, the D112 and the D25, on both the Yamaha and Ludwig kick drums, as well as solo'd kick examples for each mic. I also tried the BDM01 in a centre-of-kit position, on snare, and finally on bass. All these files were tracked using API 312 preamps to Pro Tools, via an SSL converter. There's no equalisation or compression, but I have removed unused headroom and converted the files from 24-bit to 16-bit.

A beautiful-sounding, hand-made microphone of a quality that matches its price.

Marvel's Guardians Of The Galaxy
1 month 3 weeks ago.